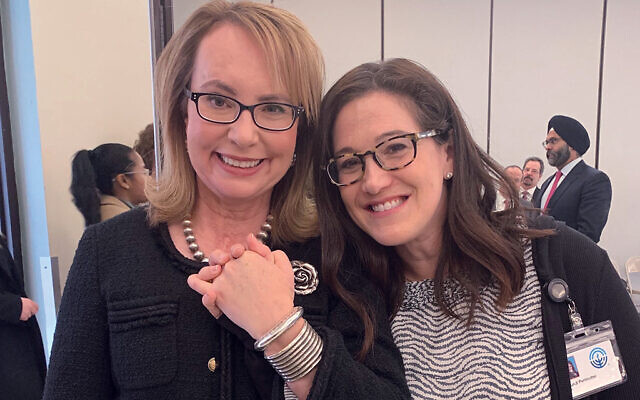 In 2013, while I was the leader of the N.J. chapter of Moms Demand Action, I got a call from a concerned mom inquiring whether I could recommend a brand of bulletproof windows for her child’s school. I didn’t know anything about bulletproof windows, but I explained that Moms Demand Action focused on keeping guns out of the wrong hands as opposed to making fortresses of our schools.

Here we are, seven years later, and security ideas that I scoffed at in 2013 now seem almost reasonable. We have grown so used to increased security measures that the idea of armed escorts for our children feels almost comforting. However, I often struggle to reconcile my desire for security and safety with my commitment to common-sense gun reform and my fundamental belief (founded in data) that increasing the number of firearms in public hands does not make us safer.

As a professional in the Community Relations Committee of Jewish Federation of Greater MetroWest NJ, I have a front-row seat to the critical focus on our community’s security. My colleagues work hand-in-hand with law enforcement and the state’s elected officials to keep our Jewish community safe in this climate of growing anti-Semitism and intolerance. Much of that work entails ensuring that federation’s partner synagogues, community centers, agencies, and schools have the tools and personnel in place to create a sense of safety and prevent further tragedies. We were all gratified to see our state legislature and governor act quickly at the end of the last legislative session to create an additional $1 million for non-profit security grants and are encouraged by the governor’s budget proposal for 2021, which prioritizes community security.

Clearly these security measures are necessary, especially as we face elevated anti-Semitism. At the same time, I believe in the need to redouble our commitment to keeping guns out of dangerous hands. That’s why federation’s increasing focus and advocacy on gun violence prevention is so important. Some examples of our engagement include our Teen Gun Violence Prevention Task Force, our partnership in state gun violence prevention coalitions, and our participation in Jewish Federations of North America’s (JFNA) emerging Gun Violence Prevention Task Force.

Focusing on gun violence prevention needs to be just as much a part of our response to the rise in bias and hate as our increased vigilance in security measures.

Keeping guns out of dangerous hands is vital to fighting hate and anti-Semitism — the presence of guns can, and increasingly does, turn ugly bias incidents into deadly acts of gun violence.

At the same time, we are learning, anecdotally, that Jewish families may be more apt to keep guns in their homes given the heightened anxiety of the times. Statistics tell us that the presence of a gun in the home can increase the risk of homicides, suicides, and unintentional shootings. In fact, access to a gun increases the risk of death by suicide by three times, according to scientific research.

New Jersey is home to some of the strongest gun laws and lowest rates of gun violence in the nation. However, our state has the unfortunate distinction of being a leading importer of illegal crime guns — approximately 80 percent of recovered crime guns in the state are brought here illegally. Other states’ weak gun laws and loopholes in our national background check system make it all too easy for dangerous individuals to obtain firearms and bring them into New Jersey.

We are immensely grateful to Gov. Phil Murphy, Attorney General Gurbir Grewal, and champions in the legislature for their commitment to addressing illegal gun trafficking and further strengthening N.J.’s gun laws and to the members of our federal delegation who stand on the side of common-sense gun reform at the national level. There is still work to do, and the times call for the Jewish community to join in — and I am grateful federation is showing up for that effort.

Our federation will continue to prioritize security during these frightening times. And, both professionally and personally, I appreciate that Greater MetroWest and other Jewish organizations continue to raise their collective voice to advocate for common-sense gun safety measures as a critical component of our fight against bias and hate.