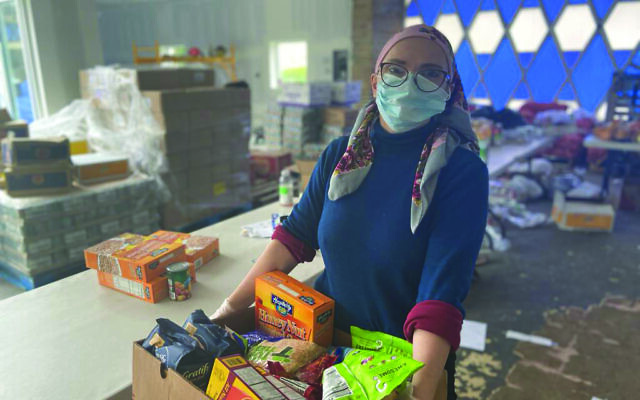 Orthodox synagogue Congregation Anshei Roosevelt has been operating a kosher food pantry, Roosevelt Community 4u, since 2014. But what started with the delivery of 60-100 non-perishable food packages a month has jumped to 350 per week due to the economic effects of the coronavirus pandemic.

He estimates that half of his clients are senior citizens.

Hezrony and wife, Sivan, are the driving forces behind this community project and the rabbi told NJJN he’s looking to expand his operations to include delivery of prepared meals to last for the full week, and Roosevelt Community 4u is now campaigning to raise $125,000 for the prepared meals program.

He secured a 5,000-square-foot kitchen in Hamilton from a caterer that he will kasher and then use for several weeks once the project begins. While continuing the weekly delivery of non-perishables (packages also include milk and produce), he plans to add 300-700 recipients of the prepared foods.

Roosevelt Community 4u is open to people of all faiths and there is no charge to recipients. Most of the deliveries are made in the Roosevelt area, including East Windsor and Monroe Township, but residents of two apartment buildings in New Brunswick recently joined the list.

The organization is supported by private donations; Fulfill, an organization in Monmouth and Ocean counties dedicated to alleviating hunger; local businesses, including Just4wheels, Patel Brothers, and the farmers market on Route 9; and large corporations, including Osem USA, Lieber’s, Target, Walmart, The Home Depot, and others.

MADA “impacted me a lot and this is one of the triggers that kicked” off Roosevelt Community 4u, Hezrony said. After all, “A warm soup can warm the heart.”