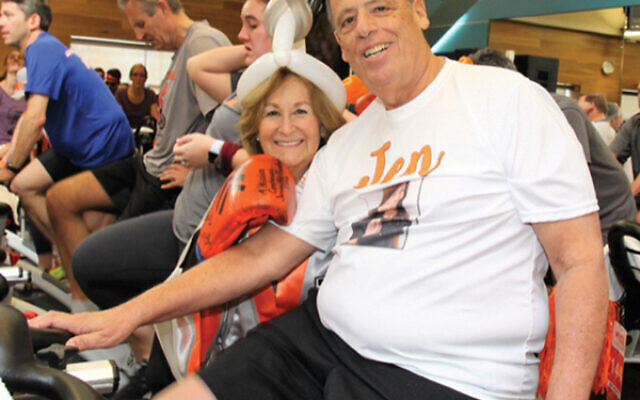 Sandy Goodman, at left, wears a boxing robe and gloves at each Cycle for Survival event to show she’s “fighting” for a cure. Her husband, Len, is at right. Photos courtesy Sandy Goodman

It was only a few months after her wedding in 2003 that Jennifer Goodman Linn of Livingston was diagnosed with Malignant Fibrous Histiocytoma (MFH)— a tumor so rare it affects fewer than 1 percent of all cancer victims.

Over the seven years she battled the disease, Goodman Linn underwent a dozen chemotherapy treatments and six surgeries — the first of which resulted in the removal of a football-sized tumor from her abdomen —before she succumbed to her illness at the age of 40 in 2011.

In those short years she made a tremendous impact in the field of rare cancer research. The annual fund-raiser she founded in 2007, Cycle for Survival, has so far raised $222 million.

“She fought this rare cancer with all she had,” Sandy Goodman, her mother, told NJJN in a telephone interview. “Jenn loved cycling and wanted to raise money for all rare cancer research and here we are.” Unusual cancers, such as MFH, are diagnosed in about half of the patients, who often have limited or no treatment options because their area of cancer is underfunded.

The next Cycle for Survival ride will take place Feb. 1-2 at Equinox in Summit. (The only other N.J. ride is scheduled for Paramus on Sunday, March 1.) The Summit ride is the sixth of 25 announced so far. Almost 40,000 cyclists in 19 cities — New York City hosted 16 events — participated in 2019 and raised more than $42 million.

New for local riders in 2020 is a Sunday ride to accommodate Sabbath observers.

We “heard from some Jewish residents who wanted to participate, but couldn’t ride on Shabbat, so this will give them an opportunity,” said Goodman.

Cycle for Survival was inspired by spin classes, a high-intensity workout where participants ride stationary bicycles in a studio with upbeat music and spirited instructors. Goodman Linn and her husband David Linn — they met at Harvard University — held the first event at Equinox at Columbus Circle; at that time it was called Spin4Survival, and later renamed Cycle for Survival when Equinox signed on as the founding partner in 2009.

The hospital took ownership of the fund-raiser in 2009. “Jenn knew Memorial Sloan Kettering, where she was treated, could grow our effort much faster,” Goodman said. “Their contributions have made our cause as successful as it is. I remember how all this started. Now, I’m just a very active and thankful volunteer.”

Equinox provides the gyms and equipment for each event, which features about 150 stationary bikes per gym and teams of four who sign up and commit to raise, at a minimum, the entry fee of $1,000; most raise between $4,000-6,000, Goodman told NJJN. She also said that 20 corporate teams from around the country have raised $1 million or more annually.

“Equinox will come in the evening before our event and remove all the usual equipment — treadmills, weight machines, and everything else — and the whole gym will be set up with recumbent stationary bikes so our teams can spin away,” said Goodman.

Each team commits to a four-hour shift. While four riders spinning for an hour is the usual makeup of a team, Goodman explained that an entrant can utilize any number of riders to complete their shift.

“Teams can do whatever they want in raising money,” said Goodman. “A team can take turns just sitting still on a bike if they want to, as long as those involved complete a four-hour shift.”

Riders include cancer survivors, caregivers, MSK staff, researchers, and their supporters. “Anything we can do to cure this miserable disease,” Goodman said.

The fund-raiser also features entertainment such as speakers, magicians, balloon artists, and more. “The whole thing is a carnival and fund-raiser combined,” she said.

Cycle for Survival has helped fund over 100 clinical trials, studies, and research initiatives at MSK dealing with many forms of rare cancers, such as pancreatic, brain, eye, mesothelioma, and multiple myeloma.

In 2012, the cancer center dedicated the Jennifer Goodman Linn Laboratory of New Drug Development in Sarcoma and Rare Cancers, a research center under the leadership of Dr. William Tap. The doctor credits Cycle for Survival with being able to add cutting-edge researchers to his team.

“Donations empower us to focus on research and spend less time finding ways to get funding,” Tap said in a conversation published by MSK. “One of the first things I did when I received money from Cycle for Survival was build and support several different areas of cancer research to help us address the diverse nature of sarcoma. This includes supporting the Jennifer Goodman Linn Lab, as well as the laboratories of various talented MSK researchers with an interest in sarcoma.”