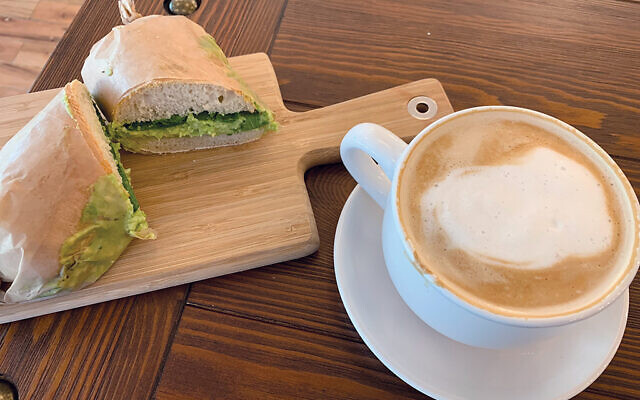 A guacamole and greens sandwich with a latte at Bakeristor, which opened Dec. 5 in Linden. Photos by Johanna Ginsberg

On a recent Thursday morning, a steady stream of customers flowed in to Bakeristor, a new kosher café in Linden. Owner Hindy Gruber rushed to greet each one with a warm “welcome” and a smile. Kindness is always on her menu.

They ordered omelets served with fresh greens and potatoes, white pizza, soups, pancakes, croissants, and plenty of coffee: lattes and cappuccinos, iced and hot, flavored and plain. The food is fresh and cooked to order, from the grilled cheese French toast to the choose-your-own-ingredients sandwiches, salads, and wraps, to the eggplant parmesan and the Bakeristor fries served with parmesan cheese, herbs, and truffle mayonnaise.

Linden’s Jewish community is having a resurgence. Once among the largest Jewish populations in Union County, only one of the town’s four synagogues, the Orthodox Congregation Anshe Chesed, remains.

About two years ago a chasidic community was established and by last spring they numbered more than 40 families, adding to the 100 modern Orthodox families already there. Bakeristor is the newest entree to a market catering to the observant Jewish community. (The few other businesses are mostly under-the-radar home-based ones offering single items, like challah or flowers one day a week.)

Gruber, 40, who moved to Linden about a year ago, saw a need for a coffee house, restaurant, bakery, and caterer. With Bakeristor she’s trying to fill them all.

The first kosher restaurant in town, located on West St. Georges Avenue, had a “soft opening” on Dec. 5. Gruber acknowledged being caught unprepared for the demand — she was just finishing a corporate catering order despite her protestations to NJJN that they weren’t yet set up to do so.

Bakeristor’s buzz began mid-October by word of mouth and extended to nearby Elizabeth with its sizable Orthodox community.

“When we heard it was going to open, we were so excited,” said Isaac Reich of Elizabeth, who came with his wife, Bar. “There’s really no artisan bakery here. You have to go to Brooklyn. Who wants to drive all that way, over a bridge, and back? Thank God now we have this.”

He and Bar were finishing the white pizza with mushrooms when this visitor arrived. He gushed, “It was the best pizza I’ve ever had, and I love pizza.” 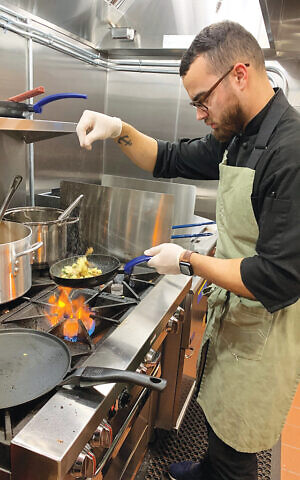 Chef Anthony Ramos in the kitchen of Bakeristor in Linden.

Gruber is quick to take on whatever tasks need doing, and on this day, with the café short-staffed, she was at turns taking orders and serving as cashier, barista, and server, carrying a hot brimming latte she had prepared to the table, along with avocado and greens on a fresh roll for another customer.

Her conversations with customers moved easily between English and Yiddish, as she chatted with a 20-something young woman who had worked as a barista at a café in Israel one moment, and with a neighbor in Yiddish the next.

When Gruber heard a garbage truck pull up she excused herself from a conversation with NJJN, grabbed some pastries, and dashed out to provide a freshly baked thank you to the sanitation crew. “They work so hard,” she said.

The restaurant, co-owned with Gruber’s partner, Schmelka Friedman, is under the supervision of Rabbi Moishe Shmiel Rottenberg of Flatbush, Brooklyn.

The menu, developed by Gruber with Bakeristor’s chef, Anthony Ramos, focuses on fresh entrees made from scratch for each customer. Ramos, originally from Puerto Rico, is not Jewish, but he and Gruber had an immediate rapport. “When he walked in, we knew that was it,” she said, adding “We were shadchan’d,” suggesting that God was their matchmaker.

Ramos said he’s fallen for the the community. “I see how people treat each other,” he said. “I really like it and I want to learn more,” he said.

Mordechai Landau of Linden, who was among the first chasidim to move into the area two years ago, has already been to Bakeristor several times. On this morning he was with his wife and son and they were eating a breakfast of eggs, pancakes, and coffee. “The ambiance is delicious [and] the food is delicious,” he said. “It’s definitely filling a void.”

Inside the appealing glass façade of Bakeristor is a spacious and sleek interior with an exposed brick wall, high ceilings, hanging chandeliers, polished wood floors, and whimsically detailed tables and chairs constructed of wood and repurposed metal wheels and pipes.

A grand opening is planned for January. In the meantime, Gruber said, “I want people to feel welcomed when they walk in, and I want them to feel always that we are so happy to be here and so happy to be serving them.”