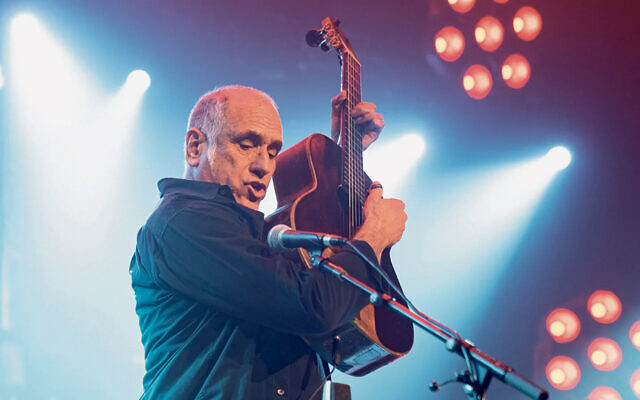 David Broza appreciates the challenge of getting young people to synagogue services.

“I didn’t come from a religious home,” he said. “But we would go on Rosh Hashanah to the local synagogue in Tel Aviv to hear the prayers and be part of everything.”

And on Friday nights, “my father tried to bring me to synagogue so many times.”

But David’s friends weren’t in synagogue when he was young; when he was a bit older, there were concerts to go to.

This week, Mr. Broza releases a new album, “Tefila,” the Hebrew word for prayer. But unlike Madonna, who offered songs “like a prayer,” on this album prayer is not a simile. Rather, the album features music for the Friday evening service. It was commissioned by Temple Emanu-El, the huge Reform synagogue on Fifth Avenue Manhattan, as part of its efforts to reach out to “young professionals ages 21-39.” On Friday, May 6, Mr. Broza will lead services with these new melodies for the “Friday Night Hub” of the Temple Emanu-El Streicker Outreach Center,” the first of nine scheduled services in the coming months for which Mr. Broza’s music — and performance — is a main draw.

Were Mr. Broza’s father, Arthur Broza, alive, “he would be tickled pink,” the musician said. “If my father was around, I’d say, ‘I’m representing you now.’”

For Gady Levy, vice president of programs at Temple Emanu-El, Mr. Broza was the perfect person to create this music “not just because he is David Broza, but because he is not religious. That meant that he’d bring a fresh sound to the prayers by exploring them for the first time, like many of the people we’re trying to attract.”

Mr. Broza actually did get to know the prayer book intimately when, at 16, he spent a year at an Orthodox boarding school in England — a year that would make his later relocation to America, including several years living in Cresskill, linguistically easier. (He now lives in both Manhattan and Tel Aviv.)

Today, “I’m not a practicing religious Jew, but I’m a respectful one,” he said.

When he got the phone call from Mr. Levy proposing he take on the project, his first thought was “I should be the last person you should call,” he said. “On the other hand, why not? Let’s see if I can deliver something that would be respectful and memorable and something of an epic level.

“It’s not just any poetry or any song. These are prayers in ancient Hebrew that have to be treated with ultimate delicacy and profoundness.”

Without committing to accepting the commission, he decided to give the assignment a try. 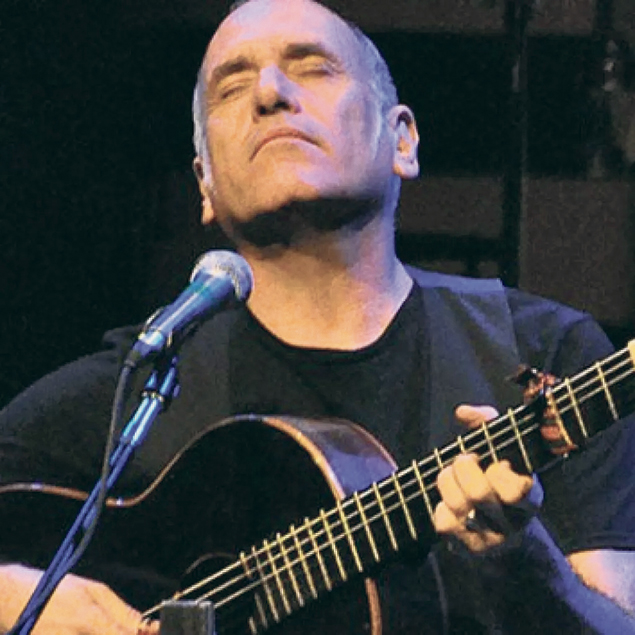 So he gave it a try — and liked the results.

“I dedicated a day toward each prayer during a period of 14 days,” he said. “I was very pleased with what came out. It represented my artwork and my ability to write music and to deal with the beautiful prayers.”

It took four months from the phone call, in April 2020, for him to start composing in August.

“My mind was ready,” he said. “My heart was open. I sat there with my guitar and the melodies started coming out.”

When you browse through the work of Jewish musicians on Spotify, and see playlists with titles like “Shabbos Mood,” you discover that most, if not all, of existing music reflecting the Friday night liturgy consists of phrases from the prayer book reworked into songs — songs that repeat short phrases for their three minutes.

“When the poem is in front of me, I write music to it,” he said. “I tailor it to the lyric. I don’t look for a verse, a chorus, a bridge, and all of that. It’s like writing music to prose.

“They do have their repetitions melodically. Lecha Dodi is really a constant repetition of the same opening phrase and then goes into other lyrics, because the lyrics demand certain changes in every verse. It has its own character.

As he transformed the prayers into music, Mr. Broza kept his focus on the Hebrew words. “I just love this language. Hebrew is my mother tongue,” he said. At the same time, “I wanted it to sound like today’s Hebrew, like my speaking Hebrew on a Tel Aviv street, not the high language that nobody can understand.”

It creates a stunning effect. Someone familiar with the Hebrew words from decades of synagogue repetition can hear them anew through Mr. Broza’s conversational yet emotional delivery of such prayers as “Shalom rav,” which asks God to “grant abundant peace over Israel.”

When Mr. Broza had finished composing the songs, he turned to Israeli jazz bassist Omer Avital to arrange them.

“He’s one of my favorite jazz musicians,” Mr. Broza said. “It took about a year and a half to work out all the arrangements.”

This is not David Broza in folk singer mode, alone on stage, strumming a guitar. The album features full orchestration. There are two choirs — a Tel Aviv ensemble of 25 singers, and a gospel choir from New York. There is a string quartet and a horn quartet, each at times doubled and redoubled through overdubs. And of course, the standard rock-and-roll musical backing of a bass player, drums, and Mr. Broza’s guitar.

“It’s a very intricate, deeply thought-out arrangement,” Mr. Broza said. “We rehearsed together, except for the choirs. Then we recorded the rhythm section, the bass, the piano, and me. Then we brought in the horn section to play. And then the string quartet. We recorded it multiple times — there are 16 strings on every track. And then I sent the recording to Israel and had the Israeli ensemble put their voices on it. When I got it back I sent it to the gospel choir. Then we mixed it for a few months. 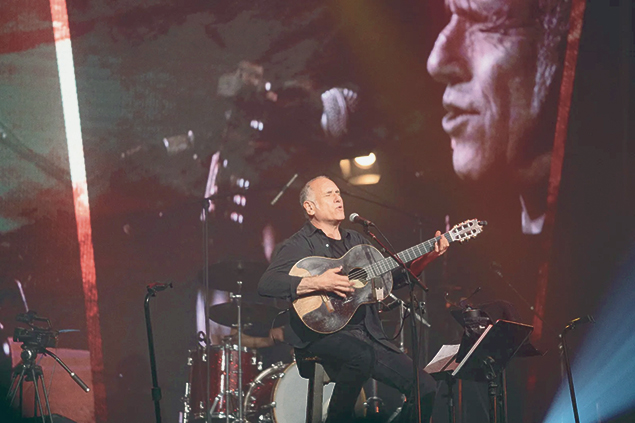 “It’s all analog. There are no keyboards, no synthesizers, no sampling. This is all live, warm, real musicians playing instruments as they sound.”

This is not Mr. Broza’s first time crafting a themed album. That would have been in 1983, when he released an album of Hebrew renditions of contemporary Spanish music that quickly became Israel’s most popular album ever.

But composing music for a synagogue service is different, he said. “I’ve never done anything like this. I didn’t have it in my wildest dreams.”

Mr. Broza said the music was directed by “the poetry, the lyrics. I had to agree with the melody that came out and nail it down so it’s very clear and one can repeat it after me,” when he leads prayers as a chazan. “Hopefully you will get it in the first listen.”

He says his memories of synagogue played a big unconscious role in his composition, though consciously “it wasn’t far from my mother’s folk music.”

His mother, Sharona Aron, was a popular Israeli performer in the 1940s and ’50s, who hosted American folk performers like Pete Seeger, Odetta, and Harry Belafonte at her home when David was growing up.

While the full album is cohesive, and each track sounds like a David Broza song, the varying musical accompaniment makes for an engaging hour of listening.

“Each one has a very different vibe to it,” Mr. Broza said. “There are a lot of angles, a lot of styles. It could be klezmer one minute, folk, jazz, Spanish the next.

When you listen, you hear classic liturgical choral chant, jazz backings that would work for the soundtrack of a 1960s spy movie, and for the Barchu prayer, bebop in the style of Dizzy Gillespie and Miles Davis. It’s avant garde, as Mr. Broza said, but it also encapsulates musically the underlying nature of that prayer as the call to communal worship, a prayer that is only offered in communal rather than individual settings.

For Temple Emanu-El, the “Friday Night Hub” Broza services are a chance to create a new community of worshippers in a demographic that generally is not engaged in synagogue life. Services will take place in the congregation’s main sanctuary; they will begin at 8 p.m., after the regular weekly 6 p.m. Friday night services.

“We hope in due time to get hundreds of people to attend,” Mr. Levy said.

Mr. Broza “is going to serve the cantor role, if you will,” he continued. He’ll be backed by a 12-piece band and the congregation’s choir. “There will be over 20 people on the bimah who are actually performing, “yet it is meant to be very participatory.” Not only were the melodies written to be sung, “we are going to project the siddur on the walls,” rather than using printed prayer books.

“We’re hoping to create a very different, very cool vibe, for people to come in and participate in services with a new twist. We’re hoping to not only get people who are familiar with the service, but people who would never think about going to a service.”

At the moment, there are no plans to stream these services.

And beyond the immediate environs of New York — and those willing to travel over bridges or through tunnels from New Jersey — Mr. Levy hopes the music will spread to other congregations.

“Our goal is for other synagogues to use the music as well,” he said. “The music is free.”

Meanwhile, Mr. Broza is getting ready for the public premiere.

“I thought I was writing this music and letting other people sing,” he said. “I didn’t think it would end up being my presentation of these prayers.”

As for other public appearances, he’s starting to schedule make-up dates for concerts canceled two years ago; a concert at the South Orange Performing Arts Center has been rescheduled many times and now is on the calendar for September 17.

He’s also preparing for new recordings, and “finishing a couple of documentaries I started during the covid,” he said.