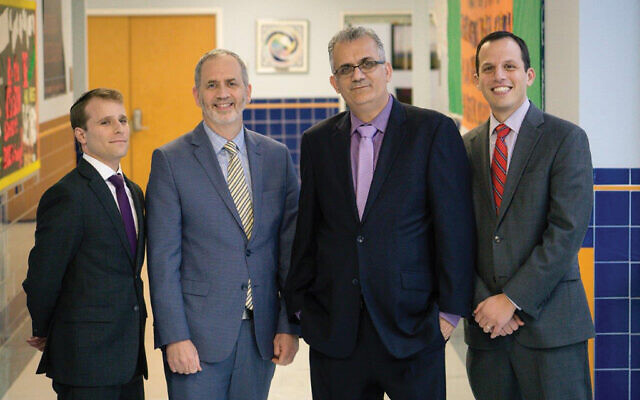 When families call the Jewish Educational Center in Elizabeth (JEC) to discuss tuition issues that have emerged as a result of the Covid-19 pandemic, they speak to executive director Steve Karp. It’s his job to balance the needs of families whose finances are suddenly precarious with JEC’s ability to pay its bills.

“I tell them right away, ‘Number one, we’re there for you. We’re going to work this out. OK? Take a deep breath. You’re part of our family,’” Karp said. But he also has to tell them the second part: “‘What can you do? Instead of just saying, you know, you can’t pay this month, can you give us 50 percent? Can you come up with 50 percent this month and call me again next month and see whether you could continue that, or if it has to be cut in half again?’”

Though there are hundreds of thousands of dollars of tuition outstanding, JEC continues to pay faculty and employees, in part thanks to a loan from the Small Business Administration’s Payroll Protection Program. Karp tries to stay optimistic, but there’s no telling what the future will bring.

“We’re going to be okay one way or another, but it’s going to be a struggle, a tremendous struggle.”

Jewish institutions across the country are struggling to meet all kinds of challenges through the Covid-19 shutdowns, and the financial issues facing day schools are one large piece of that puzzle. While in the foreground, teachers and students have pivoted to online instruction, the financial pressures hover over the background. All four local day schools — Golda Och Academy (GOA) in West Orange, Joseph Kushner Hebrew Academy/Rae Kushner Yeshiva High School (Kushner) in Livingston, Gottesman RTW Academy in Randolph, and JEC — have applied for and received payroll protection loans, which will provide some relief for eight weeks. But as they prepare to send off their graduates with what can, at best, be described as creative alternatives to their usual rituals, they also have to start thinking about a fall of uncertainty — academically, of course, but also financially.

GOA Head of School Adam Shapiro said it’s too difficult to predict where the school will be in September. “If we had that crystal ball and knew exactly how this all ends…If the economy comes back to where it was and everybody just goes back to their normal jobs and everything goes back to the way it was, then OK, fine,” he said. “But if it lingers for months and years, it will change the face of the economy in ways that right now, it would just not be prudent for me to even comment.”

In the meantime, the day schools are just trying to close the gaps, raise funds, and avoid dips in enrollment. Like Karp, Kushner head of school Rabbi Eliezer Rubin said he’s doing his best to ease the difficulties of families while keeping the school afloat. “The financial impact on individual families is devastating. And we are feeling it from the parents who are looking to us for tuition relief,” he said. “Our business and development offices are working very assiduously to support those families on one hand, and to maintain the financial viability of the school on the other hand.”

Confronting these issues head on, the Day School Initiative of Jewish Federation of Greater MetroWest NJ, which tries to make local day schools more affordable,  swung into action and raised emergency funding in the course of a few weeks to provide some speedy relief through a series of one-time grants to families with outstanding tuition bills. It distributed a total of $272,000 to 177 families who attend the local day schools, with each family receiving a grant of up to $2,000 to cover gaps in tuition.

Rebecca Hindin, director of the Day School Initiative, called the program “unprecedented” in that it distributed funds directly to families rather than via the schools, as they typically do. Hindin said that there were 100 applications within an hour of the application being released on April 13, and in less than a week and a half, “We had exhausted our funds.” Prizmah: Center for Jewish Day Schools is tracking other similar community initiatives, including ones undertaken by UJA Federation of New York, the federations of Toronto and Montreal, and SAR Academy in Riverdale.

Despite the success of the undertaking, it was not intended to rescue the schools, nor can it cover what they’ve lost in tuition. As Karp at JEC pointed out, some families have shortfalls approaching $6,000, and schools will have to raise their own funds to survive.

But fundraising is another problem, as dinners and galas have been cancelled, postponed indefinitely, or moved online. Gottesman cancelled two events early March, a dinner and a GRL PWR event. Most of the money had already been raised for the dinner, according to Naomi Bacharach, Gottesman’s director of institutional advancement, but not so for the GRL PWR event, which the school had hoped would raise “significant” funds. “We will not be having any more fundraising events this year and are working with individual donors as well as a community fundraising campaign that will be launched this week,” she wrote in a May 4 email.

JEC’s major fundraising dinner, honoring Rabbi Joseph Oratz, who is retiring as principal of Bruriah High School, and his wife, Debbie, had been scheduled for May 12. The couple plans to make aliya. “They deserve the proper kavod [honor], not just a virtual dinner,” said Karp. “Im yirtze Hashem (May it be God’s will) that will be next year, and we’ll fly them in from Israel.” In the meantime, he said, “We’ll still get on the phone and try to raise those funds.”

GOA has changed its gala to a virtual event, raising the fundraising goal to cover some of this year’s tuition gap and the anticipated shortfall for next year.

Kushner’s 72nd Annual Dinner Campaign, which the school counts on to raise approximately 66 percent of its annual campaign funds, was scheduled for June 2. Now the 72nd Spring Appeal, it is dedicated to teachers and staff. The dinner has been cancelled, but there is an ad journal. Rubin said that members of the donor community “are really stepping up.”

For now, the schools are managing, but they all have an eye on enrollment for September. Gottesman and GOA told NJJN that they are “on pace” with enrollment numbers from the same time last year; in the last week in April Kushner reported that it was at about 80 percent of last year’s enrollment, and JEC said its enrollment numbers were around 75 percent.

But as Rubin pointed out, no one knows where they will be when fall rolls around.