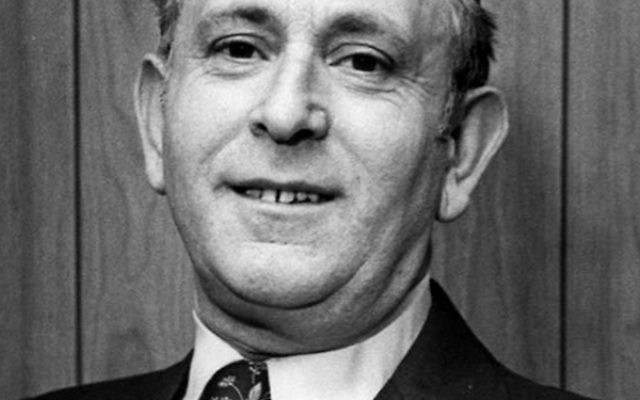 Eli Kleinman, father of Max Kleinman and grandfather of Evan Kleinman, was one of three Jews of Sedziszow to survive the Holocaust.

As faculty director of the Israel Study Abroad Program, sponsored by the Rutgers University School of Social Work, last month I traveled with 15 students throughout Israel visiting religious and cultural sites and social service projects sponsored by the Jewish Federation of Greater MetroWest NJ and other NGOs, heard university lectures, and met with individuals of different ethnic groups, Jewish and Arab.

Part of our program was a visit to Yad Vashem in Jerusalem, including the memorial for destroyed Jewish communities. Among the names displayed on panels was the town of Sedziszow, Poland, where my father, Eli, was born and lived for 14 years before the German invasion of 1939. He was one of only three survivors.

Nearly simultaneously with my visit, I received an e-mail from my nephew Evan Kleinman telling me that his 2012 documentary, We Are Still Here, about my parents’ lives in Poland before, during, and after the war, would be shown that month in Sedziszow.

Members of Evan’s generation, the third generation, have been more intimately engaged in telling the stories of their grandparents, more so than children of survivors like me and my peers, who were more protective of their parents’ having to relive the nightmare of their youth.

I don't remember exactly when I learned about the  Holocaust or first understood what a Holocaust survivor was, but I remember from a very young age hearing references to “the camps,” mostly by my Grandma Manya. On the other hand, my Grandfather Eli never spoke a word about it.

It was not until I was 13 and my grandparents were interviewed by the USC Shoah Foundation that I learned what being a Holocaust survivor really meant. For the first time I heard that my grandfather had a mother, father, older sister, and younger brother whom he lost when he was just a teenager. His parents, Lea and Naftali, and his sister, Chaya, are three of the approximately 600,000 Jews who were gassed at Belzec. He and his brother Leib were forced to work as slave laborers in a camp on the outskirts of their hometown of Sedziszow, Poland. After two months at the labor camp, seven people died of an undiagnosed virus due to the harsh and unsanitary conditions. Among them was Leib, whom my grandfather buried in an unmarked grave in the Jewish cemetery in Sedziszow.

This was the first time I had connected the images of the Holocaust with actual names and people to whom I am blood-related. This had a profound effect on me; I would later take it a step further and produce a documentary entitled We Are Still Here. The film follows my family as we travel to Poland to place a gravestone to finally mark Leib’s gravesite after 70 years.

When I visited the Jewish cemetery in Sedziszow in 2009, it was overgrown, unkempt, with only a few gravestones remaining. It seemed as though no one had really paid much attention to it after the war. However, a few years ago, I received an e-mail from a man named Tomasz Kocur. He had heard about my film and sent me pictures of himself and a whole crew of local students cleaning the cemetery, removing branches and dead leaves.

Tomasz Kocur is a Sedziszow native who heads Antyschematy 2, a local organization that supports “educational activities to combat xenophobia, racism, and discrimination; promote peaceful coexistence in a multicultural environment; and protect places of remembrance.” At the end of this past year, he informed me that We Are Still Here would be shown at Sedziszow’s first annual Holocaust remembrance event, held Jan. 28. Local students, residents, and even the mayor were in attendance at the event, which was followed by a memorial ceremony in the cemetery.

Considering what my grandfather told me — that just before the war the mayor of Sedziszow would hold rallies in front of Jewish businesses to encourage people not to shop there — hearing about this was extremely powerful. Following the event, Tomasz sent me pictures; in one, projected on a screen in front of a filled auditorium, was a photograph of my grandfather.

Seeing this alleviated my worst fear, that my family’s history would eventually be erased.

I am gratified and relieved that the answer is yes.