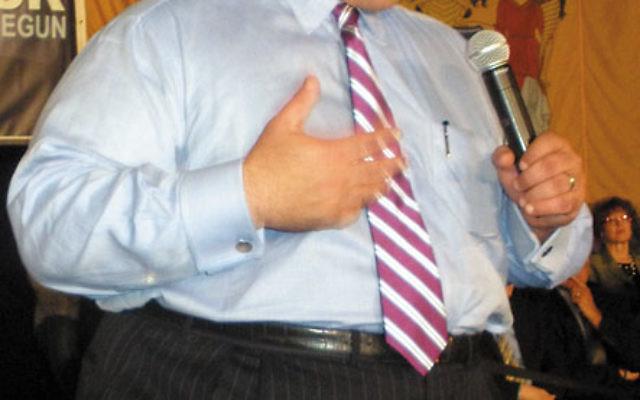 Dov Goldberg, the new cantor and director of education at Congregation B’nai Israel in Rumson, said, “Everything I do is about relationships.”

Growing up the son of a Conservative rabbi in Rutland, Vt., Dov Goldberg doubted he would follow his father into a career on the bima.

“I had a passion for the academic side of Jewish tradition and never thought I would become a Jewish professional,” he recalled. Instead, he intended to show that “one could be a knowledgeable and observant member of a Conservative congregation without being a rabbi or cantor.”

Goldberg still believes that, but after undergraduate and doctoral studies in social psychology and Jewish studies at Rutgers — along with studies at The Hebrew University, Columbia University, and the Jewish Theological Seminary — his compass pointed home.

“The more and more I dealt hands-on with the Jewish community as a teacher, the more interested I became in working in the tangible Jewish community as opposed to the academic,” he said. That realization led him to become both a cantor and a Jewish educator, who will now combine both roles at Congregation B’nai Israel in Rumson.

This summer, the synagogue welcomed Goldberg as cantor and director of education. He succeeds Cantor Marla Barugel, a pioneer among women cantors in the Conservative movement. She stepped down in late June after a landmark 26 years with B’nai Israel; she has since been named cantor emerita of the synagogue.

As cantor, Goldberg, 52, will lead the congregation in musical prayer and song, participate in services and life-cycle events, and provide pastoral support to congregants. As director of education, he will guide all aspects of Jewish education at the synagogue, from its Gan Yeladim Early Childhood program to its Adult Lifelong Learning.

“We elected to combine the educator and cantorial roles at our synagogue to develop a powerful, unified approach to an informed spirituality, and Cantor Goldberg is the ideal individual to help us develop this unity,” said Joel Weissglass, the congregation’s second vice president and former chair of its cantor/director of education search committee. “In addition to being a true mensch, Cantor Goldberg is a man of great intellect who has used his vast background to refine his understanding of and effectiveness in both aspects of his role.

“He also has a wonderful, inviting voice that makes it impossible not to want to join in,” added Weissglass.

“I’ve always loved the diversity of the cantorial and educational spheres and am excited about the dual position,” Goldberg said. Prior to his appointment at CBI, Goldberg was director of congregational learning at Temple Beth El in Portland, Me., and also served as cantor and educational director for Congregation B’nai Tikvah in North Brunswick.

His other roles include serving as executive director of the Commission for Jewish Education and director of the Akiva Day School in Youngstown, Ohio, and dean of students and residential life at the American Hebrew Academy, a boarding high school in Greensboro, NC.

“From the first interview, the people were so warm and committed and it felt like home,” said Goldberg. “Having worked in many different communities throughout my career, B’nai Israel is a much more active congregation than the leadership might believe. They’re a great congregation and I’m thrilled to be here and to be part of the larger community.”

CBI president Fran Semaya said she is excited for the congregation and is enjoying working with Goldberg as they get ready for the High Holy Days and the opening of school.

“We’re thrilled to have Cantor Goldberg join our CBI family and are very hopeful that the combined role of cantor and director of education will enhance our religious and Hebrew high school programs and encourage our students and parents to participate in both the educational and ritual experiences CBI has to offer,” she said.

A father of four children, and with one daughter-in-law and three stepchildren, Goldberg lives in Fair Haven with his wife Danielle. He said he is excited to return to New Jersey to be closer to his children and members of his and his wife’s extended family.

“I hope to bring an enhanced enthusiasm, vibrancy, and desire for participation in services, life-cycle events, and school to CBI,” Goldberg said. “Everything I do is about relationships, and I believe in a very participatory style of worship within the traditional Conservative context.

“In the educational realm,” he said, “I hope to bring an engaging, hands-on approach to a real, substantive learning of Jewish tradition and to take advantage of all the knowledge, resources, and technological tools available to create a teaching environment that’s both effective and enjoyable for students.”