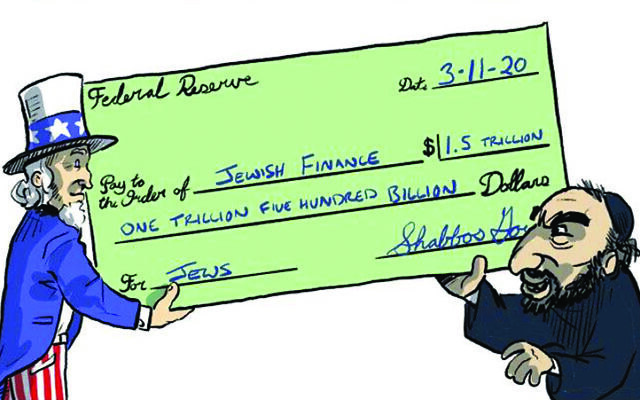 Since the Covid-19 onslaught hit the Garden State, infecting 123,717 residents and causing the deaths of 7,742 as of May 3, there has been an uptick in social media content blaming Jews for the crisis. Not that it’s surprising that hate groups would hold the town’s large charedi population responsible for the spread of Covid-19; Jews were blamed without evidence for the Black Plague in 14th-century Europe, so why not coronavirus in 2020?

“It’s the same kind of things we’ve seen for centuries,” said Jonathan Greenblatt, CEO of the Anti-Defamation League (ADL), during an April 30 webinar on “Fighting Hate From Home: Viruses and Violence — Dealing with Antisemitism in the shadow of COVID-19.” “It’s the combination of myths like blood libel, Jewish power, and greed, or money, the pretense that Jews are profiting from Covid-19.”

It raises some eyebrows, however, when local elected officials are responsible for stirring the pot. Take Edison council member Sam Joshi, who tweeted on March 25 that “‘To save #India and every Indian, there will be a total ban on venturing out of your homes,’ Modi posted,” quoting Indian Prime Minister Narendra Modi. The councilman continued, “No idea how this will work but it makes me wonder if Modi would have made an exception for #Lakewood, NJ,” followed by two smiling emoticons.

After speaking with friends, Joshi deleted the post and apologized. “It was a bad joke, and I realized quickly it could have been used for anti-Semitic purposes,” Joshi told NJJN in a phone conversation. “I am a public official and am in no way anti-Semitic. I am sincerely sorry about my mistake.”

Michael Cohen, Eastern director of the Wiesenthal Center, reached out to Joshi and arranged to visit Lakewood together the next day, giving the councilman the opportunity to see for himself that the charedi residents were adhering to social distancing regulations. Joshi said he is planning to return to Lakewood to meet with various rabbis when the coronavirus restrictions are eased.

“It’s constructive when you can evaluate certain situations and get people to realize what social media can really do, and, like Sam, are sincere in learning about our people,” Cohen told NJJN.

Such a realization has yet to come to Jackson Township Council President Barry Calogero, who, during an April 14 council meeting, called on Gov. Phil Murphy to send the National Guard to Ocean County to enforce social distancing regulations on “groups of people who hide behind cultures and religious beliefs, to put themselves, first responders, and quite honestly all of Jackson … at risk for their selfishness, irresponsibility, and inability to follow the law put in place by President [Donald] Trump and Gov. Murphy.”

Most of his critics said that Calogero, who was appointed executive director for the USDA New Jersey Farm Service Agency by Trump in 2017, was referring to Lakewood’s charedi community and that his remarks were anti-Semitic and inflammatory.

“In face of this public crisis, we share the fears that many residents in Ocean County feel for their safety and that of their loved ones,” Evan Bernstein, vice president of the ADL’s Northeast Division, said in a statement. “But we cannot allow this fear to embolden those who would take advantage of this moment to stir hatred and division. In this regard, we are deeply concerned by recent statements of Jackson Township Council President, Barry Calogero … As we are seeing a spike in online anti-Semitism and attempts to scapegoat the Jewish community in Ocean County for Covid-19, these accusations are not only baseless — the virus has spared no religion, township or county — but also deeply offensive to a community that like everyone else is coping with the loss of life.” 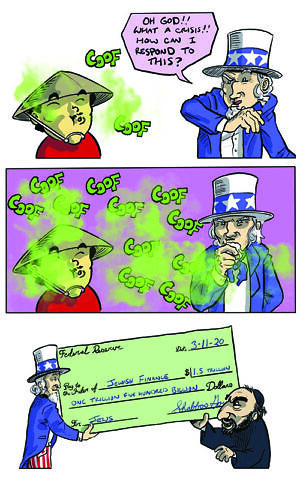 As Bernstein noted, web-based hate groups appear to be picking up on the messages, spread intentionally or inadvertently, by elected officials. Days after Joshi’s comments about Lakewood, Anthony Lodespoto of Howell was arrested and charged with making “terroristic threats,” posting on Facebook that he would use a baseball bat to beat members of the Lakewood community who were not complying with Covid-19 regulations.

Authorities have had to break up several large gatherings in Lakewood since social distancing regulations were enacted, and the town’s coronavirus numbers are staggering: As of May 2 Lakewood had the most infections in Ocean County with 1,822, almost 700 more than Toms River, which had the second most with 1,150; Lakewood also leads the county in Covid-19 deaths with 88, nine more than Brick, which had the next highest.

“In situations like this, the Jewish community has to be very careful,” said Cohen. “There are those looking to take pictures, shoot videos that can be used on social media to blame Jews for what we are going through.”

Rick Eaton, a senior researcher and co-director of the Simon Wiesenthal Center’s Digital Terrorism and Hate Project, sees some less-recognizable social media channels as forums where anti-Semitic content can filter down to more popular platforms, such as Facebook, Twitter, and Instagram.

“I’ve seen a definite increase in anti-Semitism on the internet since Covid began,” Eaton told NJJN in a telephone interview. He said that the Digital Terrorism and Hate Project monitors popular social media platforms and alerts them to posts with hateful content, but anti-Semitic groups frequently post on obscure channels. “Right now, Telegram seems to be the choice of these groups.”

Telegram, which according to its website has 400 million monthly active users and claims to have 1.5 million new users every day, offers its members more privacy than other social media platforms. Both Eaton’s group and the ADL’s Center for Technology and Society flagged near-identical anti-Semitic posts from Telegram, both of which were included as part of the ADL webinar last week.

“It’s now these types of obscure platforms,” said Eaton. “I’ve been at the Wiesenthal Center for 34 years. We all work hard to keep monitoring all this content and stay ahead of it. We see more and more of it.”