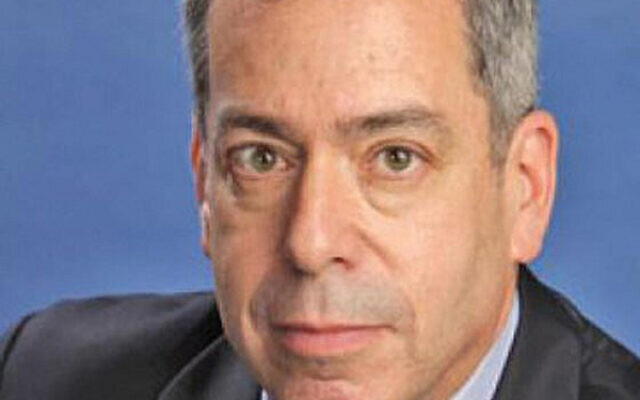 The Central Jersey Jewish Public Affairs Committee (CJJPAC), a pro-Israel advocacy organization, is sponsoring a community forum Feb. 10 on anti-Semitism at Congregation Ohav Emeth in Highland Park featuring Mark Weitzman, director of government affairs for the Simon Wiesenthal Center (SWC). Weitzman spearheaded the 2016 adoption of the working definition of anti-Semitism of the International Holocaust Remembrance Authority (IHRA), which is now used by 31 countries, the State Department, and many states and communities in the U.S.

His talk titled “The Evil in our Midst” focuses on when criticism of Israel crosses the line and becomes anti-Semitism.

“Anti-Semitism is not only growing across Europe and the U.S., but it is becoming more mainstreamed and more acceptable in certain segments and in discourse such as among academics,” Weitzman told NJJN in a telephone interview.

Weitzman noted criticism of Israel can be legitimate as long as it’s in the same context as criticism of the policies of other countries. However, it crosses the line into anti-Semitism when, for example, Israelis are compared to Nazis in their treatment of Palestinians, or if they are referred to as Jews rather than Israelis.

“It is essentially applying a double standard when Israel is accused of committing crimes like the Nazis,” he said.

Today’s divisive political environment and the widespread reach of social media, he said, contributes to the spread of anti-Semitism.

“The country is becoming more polarized and we are in a time where people are more open to conspiracy theories and scapegoating,” said Weitzman. “We know historically when we look to blame minorities the first target has frequently been Jews. Secondly, the impact social media has had cannot be overstated.”

CJJPAC organizers were motivated to hold the event because of the pervasiveness of anti-Semitism and delays in passage of a resolution opposing anti-Semitism by the Highland Park Borough Council, according to Michael Gordon, a CJJPAC member. Gordon, who wears a kipa, said he has had pennies thrown at him and has been called “a f-ing Jew” several times while walking on Raritan Avenue, the borough’s main street.

“It’s coming from the right and the progressive left and it’s not going away,” he said of the rise of anti-Jewish sentiment locally and nationally.

The SWC has been monitoring events in Highland Park for months, according to eastern regional director Michael Cohen. The town was thrust into the spotlight following the scheduled reading of “P is for Palestine” at the library by an author who supports the Boycott, Divestment, and Sanctions (BDS) movement against Israel.

In response to the book’s explosive reaction among town residents, Mayor Gayle Brill Mittler proposed passage of a resolution which defines anti-Semitism. However, the council couldn’t reach a consensus on whether to include BDS in the wording, and in November 2019, after months of community engagement, conversations, and multiple versions of the resolution, the issue was tabled.

“The pushback has come from a minority in town, but they have the town’s ear,” said Gordon. “The politicians don’t know if there is support or not and people are afraid to bring it up with politicians. That is why this [forum] is so important.”