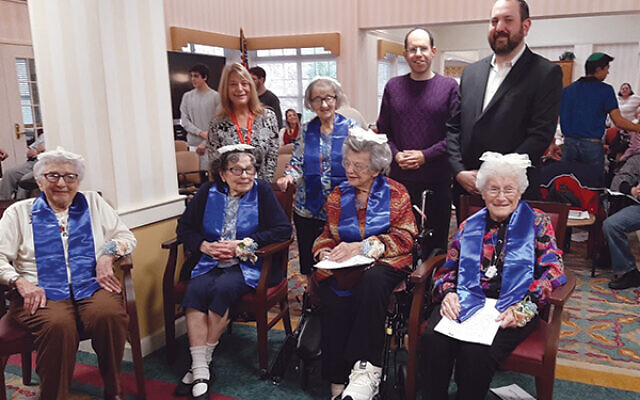 Ida Rose has been practicing and learning about Judaism her whole life, but she had to wait until age 98 to become a bat mitzvah.

“It used to be only the boys,” she said of the traditional ceremony once held only for 13-year-olds boys. “Fair is fair. Now women are equal and it’s about time.”

Rose was one of five women — the others were Esther Samuels, 89, Sali Frank, 96, Sophie Melman, 95, and Renee Waller, 87 — who celebrated becoming b’not mitzvah at the Martin and Edith Stein Assisted Living on the Oscar and Ella Wilf Campus for Senior Living in Somerset on Nov. 10.

Campus chaplain Rabbi Bryan Kinzbrunner said the women prepared for six months and in the process learned how to read the prayers and understand their meanings.

He said the women were already regulars at Shabbat services and Jewish study groups and were shining examples of “you never stop learning; you never stop growing.”

“This really is a time to rejoice and show there is always something new to learn in life,” said Kinzbrunner.

The ceremony, attended by some 100 family members and residents, featured joint reading of several prayers, singing of songs such as “Oseh Shalom” and “Hatikvah,” the Israeli national anthem, and a joyful rendition of “Siman Tov Umazal Tov.” It concluded with the women’s family members reciting a prayer of thankfulness in English for seeing a loved one reach this milestone.

Cory Heimberg, a b’nei mitzvah tutor at Congregation Knesseth Israel in Bound Brook, conducted the study sessions. “This is the best of what Judaism has to offer,” he told the gathering. “It’s really been truly an honor to be part of this.”

Rose, a former North Brunswick resident and member of Congregation Ahavas Achim in Highland Park for 67 years, grew up in an Orthodox home in the Bronx. Because her immigrant parents spoke only Yiddish, she was bilingual and her parents eventually learned English from their children. She met her husband, Gene, at a party and they had three children.

“I always wanted to learn more about Judaism and now I have the time to do it,” Rose told NJJN.

Melman grew up Orthodox in Brooklyn. Her parents encouraged her to get an education so she studied French and Hebrew in public school, although “most girls took Latin,” she said, and she went on to earn a bachelor’s degree in psychology from Hunter College in Manhattan. She and her husband, Samuel, lived in Levittown, Pa., and she has a daughter and two granddaughters. Melman decided to become a bat mitzvah “because if you’re Jewish, it’s the thing to do.”

Samuels, also a Brooklyn native, learned Ashkenazi-style Hebrew at the Yeshivah of Flatbush and graduated from New York University, where she met her husband, William. She became a teacher and he a principal in New York City, but during a teachers’ strike the couple decided to move with their three children to Israel where Samuels learned to speak Hebrew in a Sephardic dialect. They returned to the United States several years later.

Before coming to Stein, Samuels lived in Monroe where she taught Hebrew through a program of Jewish Family Services of Middlesex County. She celebrated her first bat mitzvah last year, but decided to go through a second ceremony because “it helped me refamiliarize myself with all the prayers and my Hebrew language skills.”

Frank was born in Newark to Russian immigrant parents and attended Hebrew school at the Young Israel of Newark. She met her husband, Bernard, while vacationing in Brighton Beach, Brooklyn, and they settled in Hillside. She has three children and “many grandchildren.”

“I knew how to read Hebrew, but this refreshed my memory a little bit,” said Frank.

Born in Brooklyn to immigrant parents, Waller went to a local Hebrew school on weekdays and, on the advice of her uncle, went to another Hebrew school in Manhattan on Sundays. On the subway ride to class she carried a pushka and collected change for the Jewish National Fund from other passengers. Waller was married to her husband, Lou, for 65 years, and she has three sons, six grandchildren, and two great-grandchildren.

She said participating in Jewish activities at Stein has brought back many happy memories of when she was young, like how she had loved reciting the Four Questions in Yiddish at her family’s seder.

This was Waller’s second bat in less than two years; she joined her grandson, Jonathan Waller, about a year-and-a-half ago at Temple Beth El of Somerset in a joint ceremony.

“I was a little nervous to get up in front of people and speak into a microphone,” she said of her first ceremony. “But I did it.