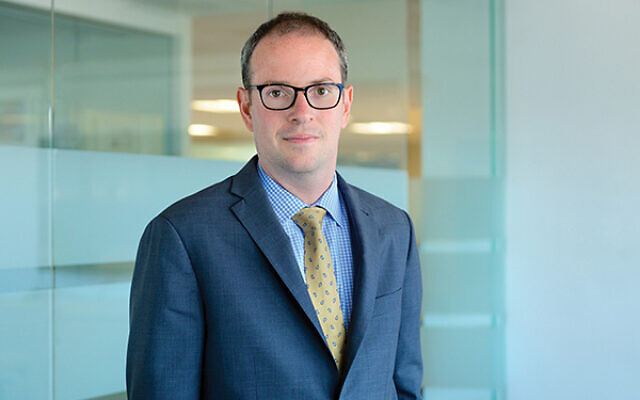 Ilan Goldenberg, a Middle East policy expert who grew up in Livingston, said he would like to see “a broad-based unified government with new leadership in Israel.”

Ilan Goldenberg — senior fellow and director of the Middle East Security Program at the Center for a New American Security, a bipartisan think tank in Washington, D.C. — has spoken about issues surrounding Israel in locations all over the world. But he rates his upcoming appearance at Temple Beth Shalom (TBS) in Livingston as something special.

“I was born in Jerusalem, but I grew up in Livingston,” said Goldenberg. “I went to Solomon Schechter Day School, which is now Golda Och Academy [in West Orange], when Golda Och was there.” He went on to Livingston High School and was a member of Beth Shalom. His parents, Lorraine and Barry, still live in the town.

“I’ve presented talks in a lot of places, but never Livingston,” he said. “I feel like I’m finally returning.”

Goldenberg will present “Understanding the Current Situation in the Middle East” on Tuesday, Nov. 19, at 7:30 p.m. as part of the TBS university program.

Goldenberg, 41, a recognized foreign policy and defense expert with experience covering Iran’s nuclear program, served as chief of staff on the team supporting Secretary of State John Kerry’s initiative to conduct peace negotiations between Israelis and Palestinians in 2013-14. He also was the senior professional staff member on the Senate Foreign Relations Committee covering Middle East issues and was a lead drafter of the Syria Transition Support Act and served as the Iran team chief in the Office of the Under-Secretary of Defense for Policy.

The 2013-14 talks were “the last time we had any direct Israeli-Palestinian negotiations,” Goldenberg told NJJN in a phone interview.

He said he hopes “we can salvage a two-state solution,” adding, “I’m not sure anything the Trump administration comes up with will help.”

Goldenberg’s Beth Shalom talk will focus on issues affecting Israel and the greater Middle East, including Israeli domestic politics, mass migration, the threat from Iran, and the views of today’s Palestinian youth.

Goldenberg said he is in concert with many observers in wanting to see the formation of a unified Israeli government, not a third election. Prime Minister Benjamin Netanyahu was unable to form a coalition government with his Likud party. Now, Benny Gantz, chief of the centrist Blue and White party, is attempting to do the same with Yisrael Beiteinu, a secular nationalist party.

“The worst thing would be a third election,” Goldenberg said. “I also feel it’s time to move past Bibi [Netanyahu]. I’d like to see a broad-based unified government with new leadership in Israel. Hopefully that will help restart the peace process.”

Goldenberg said there are also problems with the Palestinian leadership. Palestinian Authority president Mahmoud Abbas “is not well and getting old” — he’s turning 84 this week — “and he and Bibi don’t like each other.”

“New leadership is needed all around.”

Goldenberg also believes that mass migration,  citing the latest incidence of the hundreds of thousands of Kurds being forced from the Syrian-Turkish border, could easily upset the political balance in many nations of the Middle East.

In countries like Syria and Yemen, when instability leads to the collapse of the ruling government, other countries — like Iran, Turkey, the United States — are forced to get involved. Containing such situations, said Goldenberg, “is a challenge.”

As far as Iran is concerned, Goldenberg said he believes Israel has done a good job containing that enemy without crossing a line that would lead to an all-out conflict. “I commend that strategy,” he said.

Even though little progress has been achieved since the signing of the Oslo Accords in 1993 and 1995, he said, Palestinian youth now coming of age, especially those in the West Bank, are beginning to have a more positive view of Israel. It presents a particular challenge to the country as a Jewish state.

“Young Palestinians are saying, ‘I don’t need a Palestinian state. What I do need is a passport, a job, a vote. I’d like to have that in Palestine, but I’ll have it in Israel, too,’” said Goldenberg.

And if Israel controls the territory that includes the West Bank, Gaza, and the Golan Heights, and there is no established Palestinian state, it challenges the very identity of Israel. “If that’s the option Israel is left with,” said Goldenberg, “you are choosing between democracy and the Jewish nature of the State of Israel. That becomes a one-state solution; Israel can have one or the other, in that case, but not both.”

He also said he’s concerned the Trump administration is taking too much of a one-sided approach to the Israeli-Palestinian situation, by declaring Jerusalem the Israeli capital and supporting the annexation of the Golan Heights.

“What we need are new leaders willing to take the steps to get this done,” Goldenberg said. “I believe Egypt and Jordan, who have relations with Israel, are the most important countries in the peace process. We’ll see what the future brings.”

Goldenberg, and his wife, Meghan, reside in Falls Church, Va., with children Alec and Anna. He received bachelor’s degrees from the University of Pennsylvania and a master’s in international affairs from the Columbia School of International and Public Affairs. He is also an adjunct professor at Georgetown University’s Security Studies Program.

Who: Ilan Goldenberg, director of the Middle East Security Program
at the Center for a New American Security
What: “Understanding the Current Situation in the Middle East”
Where: Temple Beth Shalom, Livingston
When: Tuesday, Nov. 19, 7:30 p.m.
Cost: Free
Contact: 973-992-3600 or office@tbsnj.org