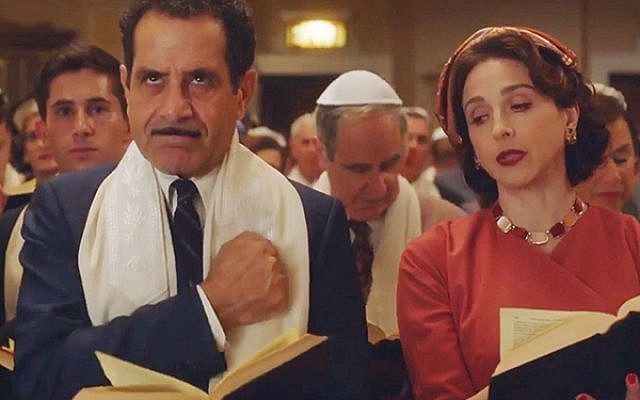 A Yom Kippur clip from the trailer of season two of Amazon’s “The Marvelous Mrs. Maisel.” YouTube Screenshot

It’s one of those cultural paradoxes that have pop culture observers like me scratching our heads: Even though Jews play powerful roles in Hollywood movies and TV shows, films continue to miss the mark, and badly, when it comes to the portrayal of Members of the Tribe. Jewish characters are drawn either too simply or too tortuously, as in neurotic Larry David in “Curb Your Enthusiasm.” Here are some of the worst examples of films getting Jews wrong in the year just gone by.

“Red Sea Diving Resort.” I don’t know what’s more heavy-handed — the musical score or the plot. The real-life Operation Moses, on which the film was based, was indeed heroic — the daring rescue of Ethiopia’s Beta Israel to Israel through Sudanese refugee camps. The film promotes a tale of Eurocentric morality, while at the same time misses an opportunity to feature Israel’s best self; it could have been an aspirational tale about one of Israel’s finest moments, when it gathers in exiles. The movie was released this summer, at a time when Ethiopians rallied in the streets to protest what they saw as institutional racism in the wake of the killing of Solomon Teka, an unarmed Ethiopian Israeli teen, by an off-duty police officer. The film, in the end, skips over the story of the Beta Israel, who have incredibly rich traditions of Jewish ritual and cuisine that have sustained the exiled population for 2,700 years. Instead, the directors relied on tired clichés of dramatic rescues. Throughout the film, the Beta Israel — the film’s main characters — are both hyper visible and yet invisible.

“The Marvelous Mrs. Maisel.” In the 1950s, when this TV series (now in its third season) takes place, my Holocaust survivor grandfather was living a blue-collar life in Brooklyn. He worked in a factory, learning English with the tools at his fingertips — The New York Times and a Yiddish-English dictionary. The show is about an affluent Upper West Side Jewish woman who finds solace from her disintegrating marriage in performing stand-up. It’s an assimilationist’s fantasy, one without a hint that the Holocaust had just ended. The lack of nuance is forgivable, given that it’s a satire, but for many being Jewish in the ’50s was not an adventurous playground filled with fur coats and smoke-filled clubs. For a generation of immigrants, it was harsh. The show conveniently whitewashes that history.

The Hallmark film “Holiday Date.” In short, the plot: Brooke has to enlist her friend Joel to play her now-ex-boyfriend as she goes home for the holidays. She described her ex as “Mr. Christmas.” Only two problems: her parents don’t know they broke up and … Joel is Jewish. Uh, oh. In one scene, he confesses Christmas envy: “I’ve never celebrated Christmas before, but I always wanted to! You know the perfect storybook version: decorate the tree, the stockings on the mantle, Christmas cookies, candy canes, sleigh rides, all the fun stuff! It always seemed so great to me!”

Later, when Brooke’s father tries sufganiyot, he says: “I’m sold. Chanukah tastes just as good as Christmas.” It’s a Christmas movie with Jewish kitsch. Hallmark slapped a kipa on a Christmas rom-com and called it a Chanukah movie. It reduces Judaism to food (OK, maybe not such a bad thing), and then reduces it further by tying it too closely to Christmas. And the film paints Christmas as a secular celebration that anyone could just enter if they believe it enough. It’s not, though. Christmas is Christian, no matter how consumerist one makes it.

Writing in The Washington Post, Britni de la Cretaz went further, suggesting that Hallmark’s slate of Chanukah films aren’t just bad, they’re anti-Semitic. “The trope of the sneaky, untrustworthy Jew, who is a perpetual outsider, is an enduring and pernicious stereotype,” she explains. Here, here.

The worst of the “getting Jews wrong” batch in 2019 is “The Awakening of Motti Wolkenbruch.” It’s a simple formula: Orthodox Jewish man falls for non-Jewish woman. But it traffics in overly simplistic (and sometimes offensive) portrayals of the Orthodox. The characters are reduced to stereotypes: Motti’s mother is a histrionic woman who only wants to marry off her children; the eponymous character is sick with “shiksappeal.”

There is a bright spot from the year, though: “Sefarad,” an independent film now available for free on Amazon Prime, is about the little-known story of Artur Carlos de Barros Basto (aka Abraham Israel Ben-Rosh), a decorated WWI military general and writer who revitalized the Jewish community in Porto, Portugal. He founded a community of Crypto-Jews and Marranos, helping them return to Judaism after their faith was repressed for hundreds of years following the Spanish Inquisition. Films like these tell stories of Jewish communities glossed over by Hollywood and the wider Jewish conversation.

Eli Reiter is a teacher and writer and host of the Muslim-Jewish storytelling series.