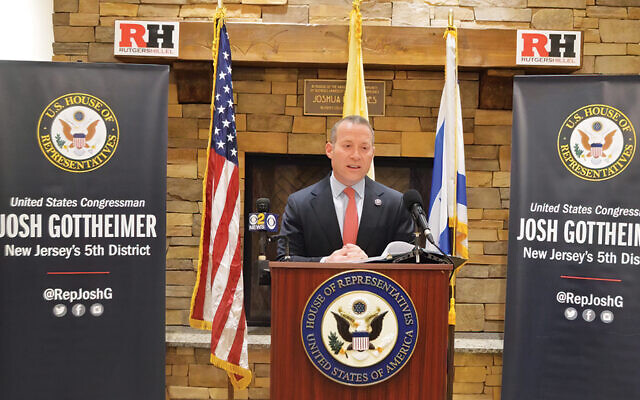 Some people show up.

After writing letters to Rutgers University officials protesting antisemitic actions at the state school, this week Mr. Gottheimer went to the Eva and Arie Halpern Hillel House on College Avenue in New Brunswick, where he spoke about and condemned antisemitism, and urged students to “continue to insist that there be no tolerance for antisemitism in our society.”

In his talk, Mr. Gottheimer criticized the university for silence in the face of a part-time faculty union’s calls to boycott Israel, and for allowing speakers with ties to terrorist organizations to speak at a 9/11 event sponsored by the university’s Center for Security, Race and Rights.

“When the part-time faculty union called for the university to boycott Israel as part of the antisemitic BDS movement, all you could hear from Rutgers were crickets,” Mr. Gottheimer said. “It’s shameful, and it’s unfortunate. Instead of choosing to address hate and animosity toward our ally Israel, the university felt that the pressure was so intense that it had to change its course.”

At the same time, Mr. Gottheimer praised Dr. Holloway for his efforts toward amity with the Jewish community, both on campus and overseas.

“I’m encouraged to hear about your recent trip to Israel,” he said, addressing the university president, “and rather than heed the calls of divestment, you’ve chosen to work more closely with the Jewish state, by signing a Memorandum of Understanding between Rutgers and Tel Aviv University to boost research collaboration between the two schools. That’s a wonderful development.”

The fight against antisemitism is not just a Jewish responsibility, the congressman said. “We’re counting on our community here at Rutgers, New Jersey’s flagship public university, to stand strong in our shared fight against hate. Even a slight, slight crack in this paper-thin veneer can allow a flood of these evils to take an even tighter hold of our society, as we have seen many times before in Jewish history. We cannot allow these ideas to fester, to go unchecked, or to be further embraced. We must always stand up and speak out whenever and wherever we see it.”

Mr. Gottheimer singled out the BDS movement for particular criticism, saying that while the “Boycott, Divest, and Sanction movement is painted as a socially-progressive cause on college campuses, that could not be further from the truth. BDS inherently denies the Jewish people’s 3,000-year-old connection to the land of Israel, while seeking to delegitimize Israel and deny its right to exist as a Jewish state. And the founder of the BDS movement has called for the destruction of Israel.

“This is antisemitism dressed up as political purity.

“While it’s absolutely acceptable for students and faculty to speak their minds and disagree, the goal of the BDS movement is eradication of Israel. Imagine if someone called for the destruction of one of the 22 countries in the Arab League?

“When organizations, companies, and institutions validate BDS, they’re contributing to the problem and furthering that hatred.”

That, Mr. Gottheimer said, is “why it was deeply problematic when the New Jersey-connected entities like Ben and Jerry’s chose to participate and validate the movement by refusing to do business in the West Bank.”

That equation between supporting the BDS movement and not doing business in Israeli communities in the West Bank, however, is not so simple. While the Israeli government publicly argues that not doing business with West Bank settlements is akin to not doing business with Tel Aviv, and has encouraged its supporters to get such an equation written into U.S. laws, liberal Zionist groups opposed to Israel’s West Bank policies argue that boycotting Israel’s West Bank settlements is not the same as boycotting Israel. They note that Israel itself, as recently as last week, signed an agreement with the European Union that allows Israeli companies and academics to compete for grants from an EU research program — but explicitly disallows participation from institutions outside Israel’s 1967 borders, such as Ariel University in the Ariel settlement.

Mr. Gottheimer noted that he had called on Ben and Jerry’s parent company, Unilever, to rectify the situation and praised Governor Phil Murphy for “divesting New Jersey from Unilever stocks until the company addresses Ben and Jerry’s support of the antisemitic movement. That’s leadership.”

The congressman added that he has asked “the United States Securities and Exchange Commission, the SEC, to request Unilever amend their regulatory filings and disclose the material, financial risk factors they face by participating in the antisemitic BDS movement, including the approximate 13% decline in their stock since the announcement of the boycott.”

He also pointed to other initiatives he has worked on in Washington. They include the Never Again Education Act, which was signed into law in May 2020. It created a new grant program for the United States Holocaust Memorial Museum to provide schools and teachers with resources and tools to teach about the Holocaust, and the No Hate Act, which now is before a subcommittee of the House Judiciary Committee. Mr. Gottheimer said that the proposed law “will strengthen federal law to combat hate speech, threats, and attacks against anyone” and would “help ensure that our nation can better respond to and combat despicable acts of hatred.” It now has 105 co-sponsors, of whom only 15 are Republican. In the Senate, only two of its 24 cosponsors are Republican.

Returning to the discussion of antisemitism at Rutgers, Mr. Gottheimer said that “it’s important to send a clear message that all Rutgers students and community members, including those who identify as Jewish or pro-Israel, are equally valued and they shouldn’t be afraid to be penalized or singled out. That goes for anyone of any race, religion, gender — you name it — especially as white supremacy is on the rise, and across the nation, we must not tolerate it in any form. We cannot forget that just two years ago, white supremacists and far-right extremists were marching on a university campus in Charlottesville, chanting ‘Jews Will Not Replace Us.’”

He concluded by quoting “a former Rutgers law professor you may have heard of, Ruth Bader Ginsburg. She reminded me why I’m so passionate about calling out antisemitism and supporting the U.S.-Israel relationship, which is so essential to protecting the United States of America. She said, ‘The demand for justice runs through the entirety of the Jewish tradition. I hope I will have the strength and courage to remain constant in the service of that demand.’

“We cannot shy away from that demand for justice. We must support Jewish students and the Jewish community here at Rutgers, across New Jersey, and across our great country.”

After the talk, the congressman held a more intimate conversation with a smaller group of Hillel students.