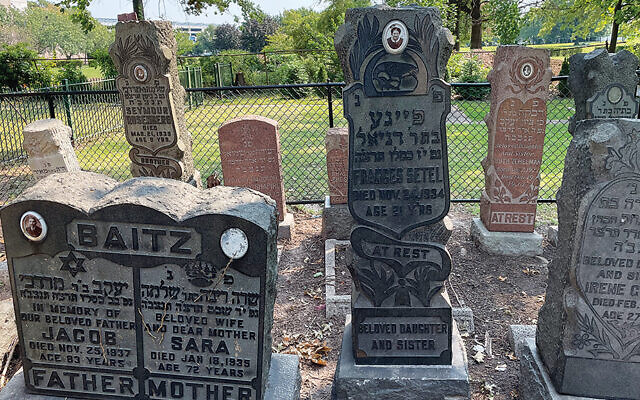 In this week’s Torah portion Chayei Sarah, the patriarch Abraham establishes the first burial ground of the Jewish people. This famous site is called Me’arat Hamachpelah — the Cave of Machpelah. After he rises from mourning his wife Sarah, Abraham negotiates the purchase of land for use as a sacred burial ground. Later, after Abraham dies, his sons bury him next to Sarah in the Cave of Machpelah. At that point in the parsha the place is described for a second time as the field that Abraham purchased from Ephron the Hittite (25:9-10).

Let us focus on two important aspects of Chayei Sarah. The first is the great detail with which the Torah describes Abraham’s acquisition of this land, which he will dedicate as a sacred burial ground. In this drawn-out negotiation Abraham asks not once, not twice, but three times to buy the land. Initially, the Hittites agree, and offer give it to Abraham as a gift, so he can bury Sarah there. Abraham, however, insists that Ephron, the plot’s owner, state his price. Abraham immediately accepts the price, and tenders 400 shekels of silver, acquiring clear title under a contract witnessed by the local inhabitants.

Our sages remarked upon the significance of this transaction. For example, in Bereshit Rabbah, Rabbi Yudan bar Simon explains that there are three places in the Land of Israel whose purchases are described in detail, so that the nations of the world will know that Israel’s rights to those places are absolute. The Bible describes the purchase of the Cave of Machpelah, the burial ground of Joseph (in the northern city of Shechem) and the first Temple that King David built in Jerusalem. For these sacred places, the Bible does not merely say that Abraham, King David, and the patriarch Jacob enjoyed rights to the land, but it specifies the exact purchase price paid to the seller. This is because these lands were acquired in perpetuity. The details of the sale demonstrate that Israel’s rights to them are absolute, irrevocable, and incontestable.

I find it noteworthy that of the three places mentioned in this portion of Bereshit Rabbah, two are burial grounds. The other becomes the site of the first Temple.

The transcendent importance of the Cave of Machpelah is also known from our sages’ teaching that in addition to our three patriarchs and matriarchs, Adam and Eve also are buried at this sacred site. In fact, it is because there are four couples buried there that the town is known as Kiryat Arba (in English, the town of the four). The detailed account of the acquisition of this site is not given to us so that we might appreciate the nuances of ancient bargaining and property contracts. Rather, these details teach that this place is the inheritance promised God promised to Abraham and the Jewish people for posterity.

The concern with posterity is the second aspect of Chayei Sarah that occupies Abraham. Directly after Abraham buries Sarah, he undertakes to arrange a marriage for his son Isaac, directing his senior servant to travel to find Isaac a suitable wife. Through this, his final act, Abraham secures the posterity of the Jewish people.

The historical record reveals that throughout antiquity and the middle ages Jews worshipped at the Cave of Machpelah. For example, Benjamin of Tudela visited Hevron in the 12th century. In his diary, he describes the pilgrimage and worship he witnessed at Me’arat Hamachpelah.

Shortly after our grandparents and great-grandparents arrived on the shores of America, they also bore the responsibility of establishing sacred burial sites for their loved ones. In the mid-1800s, Newark’s Jewish immigrants banded together to form burial societies and to acquire land on the city’s southern and western borders. For more than a century, the fate of these cemeteries was tied together with that of Newark’s thriving Jewish communities. But in the 1950s and 1960s, members of the Jewish communities of Newark moved westward to greener and more spacious places.

As reported so well in these pages on October 1 in “The cemeteries of Newark,” the Jewish Federation of Greater MetroWest rose to meet the challenges presented by the geographic separation of our communities from its burial sites. In the late 1980s, Federation’s community relations committee, led by Rabbi Norman Patz and David Mallach, established an annual visiting day so we could visit the graves of our family members around the time of the High Holidays. A few years later, Federation’s community relations committee established a trust to fund the cemetery maintenance. Because it was established with funds given by a cemetery on McClellan Street named Beth El Memorial Park Association, that organization is called the Beth El Memorial Park Foundation.

In recent years, the requirements for the upkeep and maintenance of Newark’s Jewish cemeteries have exceeded the capacity of the trust set up in the mid-1990s. Unfortunately, these sacred spaces were exposed to the risks of intrusions, vandalism, and disturbances from the forces of nature. As it does in so many instances and in so many places, the Jewish Federation of Greater MetroWest rose to address a critical challenge before our community. In 2018, Federation provided emergency grant monies to build better fences around the cemeteries to prevent vandalism. Two years later, Federation funded the removal of a row of trees in the cemeteries, which was necessary because as the decades passed, the trees’ large root systems would disturb and ultimately overturn many headstones.

More recently, our community received a major gift from the Stanley and Rela Banks Foundation to support the important work of maintaining the dignity and security of these burial grounds.

The Torah will teach us of the extraordinary efforts the children of Israel devoted to ensuring an appropriate burial for their fathers and mothers in a sacred place. At the end of the book of Genesis, we read of Jacob’s final acts. Still in Egypt, he summons his sons to his bedside for his last testaments and blessings. But his parting words begin with an instruction. “Kivru oti el-avotai,” he says. “Bury me with my fathers.” As with all the generations of our people, Jacob’s wish is to maintain contact with his fathers and his community even after death. His son Joseph respects Jacob’s last wish and travels to the Land of Israel with a large entourage to bury Jacob in the Cave of Machpelah.

In the next generation, at the end of his life, Joseph extracts an oath from his brothers to bury his bones in the Land of Israel. When we read of the exodus from Egypt, we learn that Moses brings Joseph’s bones with him out of Egypt, in fulfillment of this oath.

Although the Torah portion begins with an account of the death of our matriarch Sarah, it is titled Chayei Sarah, meaning Sarah’s Life. I believe this is because the parasha, in describing the historic aspects of her burial and her posterity, is focused not on Sarah’s death but on her legacy.

We are fortunate today that we live in a community that continues to honor the legacies of its founding generations.

Jeremy L. Hirsh, Esq. is a trustee of Beth El Memorial Park Foundation. He lives with his family in South Orange.