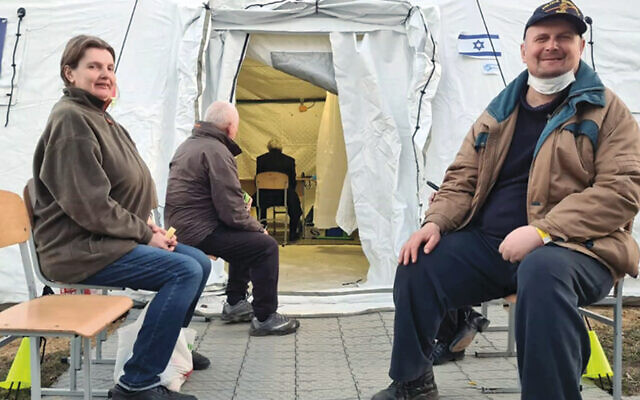 ISRAEL 21C — For a moment, Yoel Har-Even was distracted. We were speaking via Zoom from Israel’s Shining Star field hospital in western Ukraine, and a siren began to wail outside.

“Usually when we hear a siren, we need to run to the shelter in a school for about 15 minutes,” said Dr. Har-Even, who is in charge of the remarkable 66-bed hospital in Mostyska, inside Ukraine’s war torn borders. (He’s not a physician but holds a doctorate in business administration from Ben Gurion University.)

The lateness of the hour, however, meant that the 70 Israeli volunteers staffing the field hospital were already safe inside the building, so he stayed on the line.

“Mostly they are attacking military and not civilian targets,” he said, adding that he hadn’t heard any explosions.

“The Russians asked us to mark the tents in a way that pilots flying overhead can see it is a medical facility,” explained Dr. Har-Even, who has served in Israel Defense Forces field hospitals in Rwanda and the Balkans. 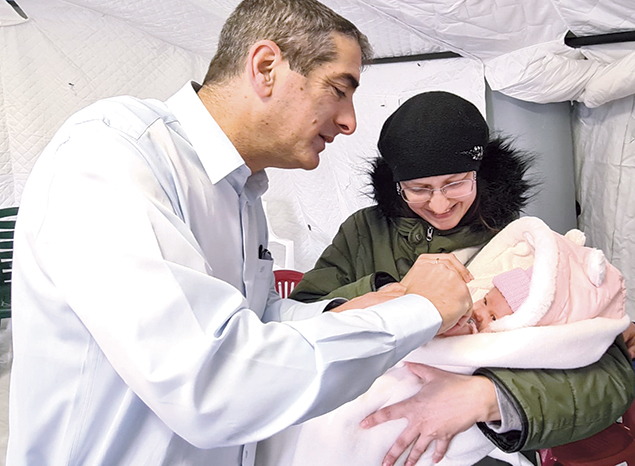 “But we cannot count on the Russians, so we brought some security from Israel. We have evacuation vehicles waiting outside the gate, ready to go with helmets and bulletproof gear.”

It is a necessary precaution. The World Health Organization reported 31 Russian attacks on healthcare facilities in Ukraine between February 24 and March 13.

Israel opened the Shining Star field hospital in mid-March, and since then the hospital — which is operated by Sheba Medical Center, Israel’s Health Ministry and Clalit HMO — has treated nearly 2,200 patients. It’s also received a second shift of volunteers.

Within the first five days, the hospital treated more than 730 locals and refugees from other parts of Ukraine and performed 16,000 lab tests. Their ailments and injuries are mainly unrelated to the war. 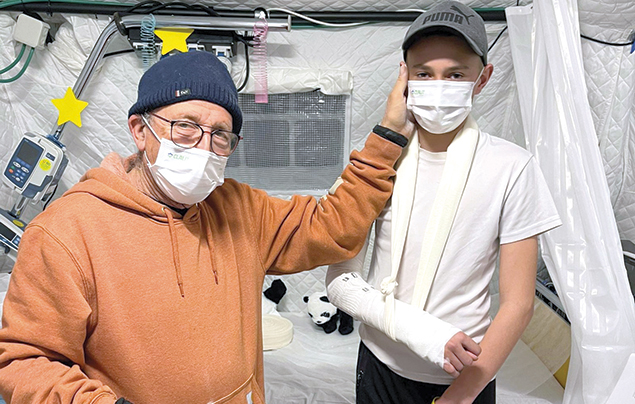 One patient is a girl who had surgery in Israel two years ago for a kidney problem and recently developed another medical complication. “When her family heard the Israelis had a hospital here in Ukraine, they drove her 48 hours to see us because they trust the Israeli medical system. They are staying with us until she is better,” Dr. Har-Even said.

The hospital — which is equipped with over 100 tons of medical supplies flown in from Israel — is staffed by Jewish, Muslim and Christian personnel from Israeli hospitals, health maintenance organizations and Magen David Adom.

Despite the very obvious risks of coming to Ukraine, which has been under constant bombardment since Russia invaded on February 24, Dr. Har-Even — the director of Sheba Medical Center’s International Division — had no difficulty gathering volunteers for the Shining Star mission.

“Many of the team came from here or has family here, but even those who don’t were eager to participate,” he said. “We had to turn some away. The response was heartwarming.”

Dr. Adam Lee Goldstein, who is from Washington, DC, and now is the head of trauma surgery at Wolfson Medical Center in Holon, said he volunteered for the mission “to represent Israel and show we want to help and we care.” 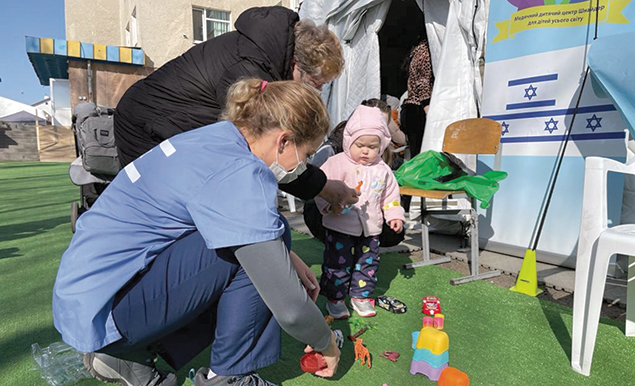 The team is working closely with doctors at the local hospital, he said. “We can use their operating rooms and we can learn from each other. We are giving trauma courses and basic life support courses — anything they want.”

The field hospital is capable of accommodating 150 patients simultaneously, and includes a triage area, an ER ward, men’s, women’s and children’s wards, labor and delivery facilities, imaging and telehealth technologies, mental health services, a lab, a pharmacy, and an outpatient clinic.

“The Ukrainians are overwhelmed to see what we have put up here,” Prof. Elhanan Bar-On, director of the Sheba’s Israel Center for Humanitarian Emergency and Disaster Medicine, said.

“Our aims were high, and I think we achieved even higher. The lab we have here is unprecedented in the history of field hospitals in the world. It’s really an amazing place. This is a landmark in the history of Israeli aid overseas.”

Dr. Bar-On — who arrived in Mostyska on March 7 to assess needs before the Israeli team arrived —soon will be heading to Haiti to treat burn victims, but plans are for the hospital to remain open. 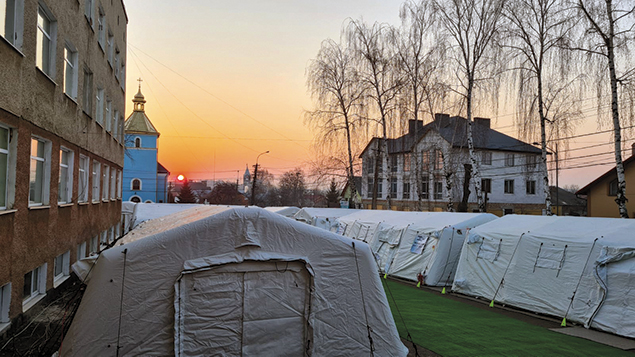 Overview of the Israeli field hospital in Mostyska, Ukraine.

For many Israelis, the desire to help the Ukrainians is deeply personal because so many have their roots in Ukraine and Russia, but there is a larger and more bitter history at work here too.

In 1943, most of Mostyska’s 4,000 pre-World War II Jewish residents were murdered by the Nazis and Ukrainian collaborators.

“My mom was born not so far from where we are now on the main route from Lviv toward Krakow,” he continued. “My grandma was born here. Most of my family comes from this area in Ukraine.

“She said, ‘I never stopped you from going on missions around the globe. You went to Africa, to India, to Nepal, to Kosovo. I’m asking you, please don’t go. If Grandma was alive, she would beg you not to go.’ 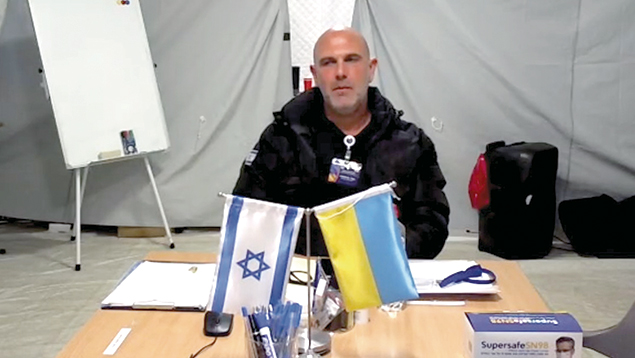 “I told her that I’m going there … because of her and because of Grandma and because of what our family went through in the Holocaust,” Dr. Har-Even said, his voice breaking with emotion.

“If I can change, even a little bit, the lives of the people — like nobody did for my parents and grandparents when they were here 75 years ago — I need to do it.

“These people” — the Israeli volunteers — “came in the name of the state of Israel and also as human beings and health providers who do not forget what happened here 77 years ago but understand that we have a different role in this world.

When he arrived in Ukraine, Dr. Har-Even, the Israeli delegation, and the mayor of Mostyska went to the town’s Jewish cemetery to say kaddish. 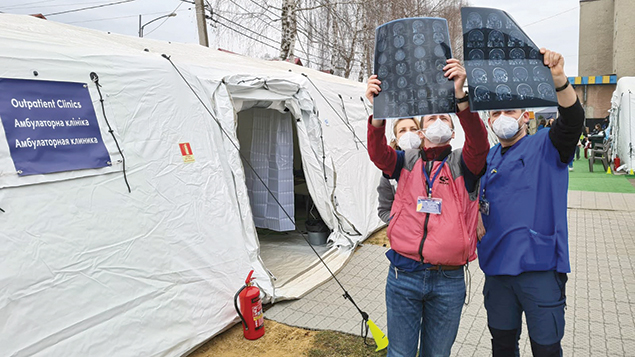 For future missions, Dr. Har-Even said that the Shining Star field hospital will be renamed the Jewish People Field Hospital. “It will be a worldwide facility that can be sent anywhere by the Jewish people, coordinated by Sheba,” he said.

“With very limited resources, we can do so much good for so many people. We can give them dignity, humanity and warmth.”

Parallel to the mission in Ukraine, Sheba Beyond continues to treat Ukrainian refugees in Moldova, using telemedicine innovations that allow Sheba physicians in Ramat Gan to diagnose and treat patients remotely.

In addition, a team of paramedics, EMTs and physicians from Magen David Adom and Tel Aviv Sourasky Medical Center have established a field clinic in Moldova for Ukrainian refugees, at the request of the Chisinau Jewish community. And Israeli voluntary first-response network United Hatzalah has flown more than 2,000 Ukrainian refugees to Israel aboard planes staffed by trained personnel to provide medical aid mid-flight.