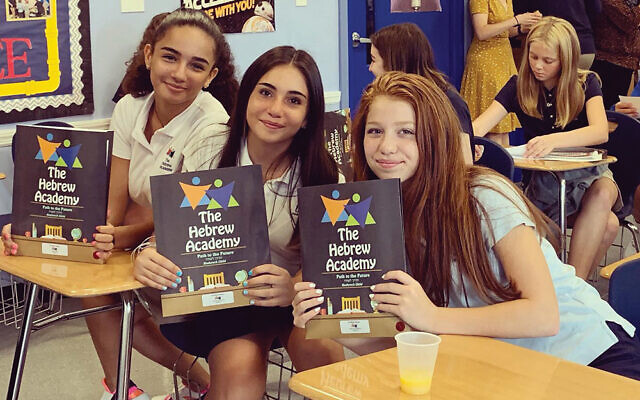 When Ari Teplitz walked into The Hebrew Academy in Marlboro for his daughter Amalya’s first day, he lost his bearings. The former student didn’t recognize his elementary school from the 1980s; the campus facilities and the number of students enrolled had grown significantly in the ensuing years.

“It was a lot smaller,” Teplitz said about his pre-K and early elementary years at the former Solomon Schechter Day School of Greater Monmouth County.

His parents, Rabbi Dan Teplitz and Sandee Chalik (a teacher at the school), were among the school’s founders.

“In their wildest imagination, I don’t think they could have envisioned the school that The Hebrew Academy has become and the number of Jewish students who have benefited from their vision,” said Ari Teplitz, whose daughter is now enrolled in second grade.

On Dec. 8, the school celebrated four decades of educating students at its 40th Anniversary Chanukah Ball at Congregation Ahavat Olam in Howell.

When the school opened in 1979 there were 29 students in pre-K and kindergarten. Today the school boasts a growing enrollment of 200 students from early childhood through eighth grade and is more than halfway through a $6 million capital campaign to add more classrooms, a new sanctuary, and a full-size gym and auditorium, among other improvements. 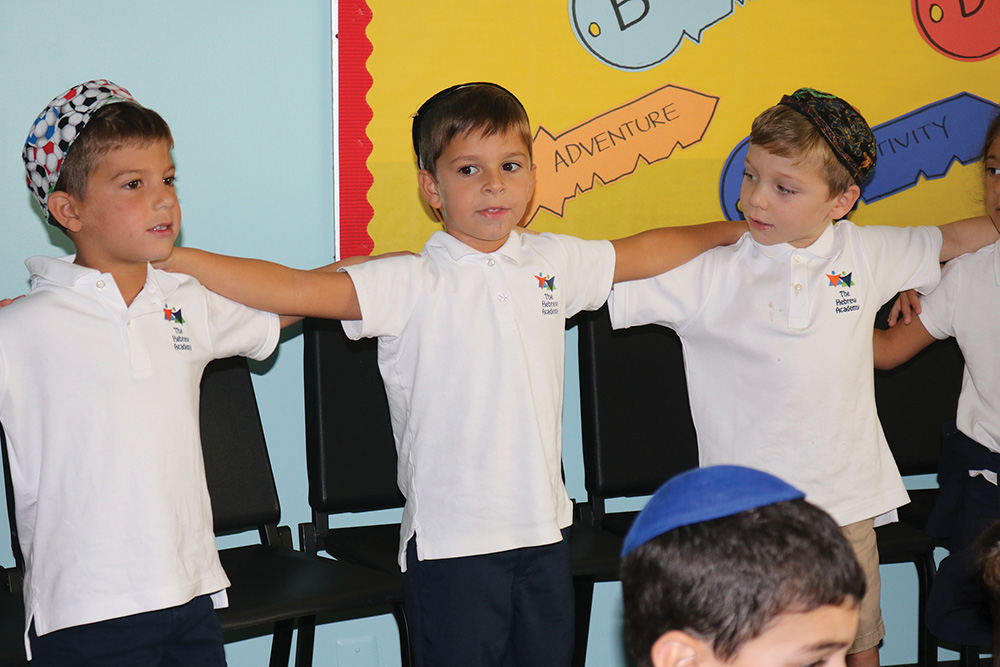 From left, Eli Cohen of Marlboro, Jacob Black of Colts Neck, and Izzy Schonbrun of Deal during an early childhood kabbalat Shabbat program.

“We are a very special, unique community of parents, students, staff, and teachers,” said head of school Yoti Golan. “We form a community that is much more than a school. We raise Jewish children with values.”

Golan told NJJN that The Hebrew Academy, which draws its student body from 33 towns, is the only non-Orthodox day school within a 40-mile catchment area stretching over five counties.

“It is important to have a Jewish day school so that the Jews don’t forget about Jewish history,” said fifth grader Ethan Gallin, 10, of Marlboro. “My birthday wish for the school is to have it grow bigger and to have more students.” Ethan added that his friends in the school feel “more like family.”

School president Maxine Macnow of Colts Neck called the school “a vibrant and critical part of the Jewish community,” and attributes the school’s longevity to good stewardship.

“We are in the black with absolutely no debt,” she said. “We have no mortgage. We own the building and the land. We made a promise never to go into debt…. We have extremely good management, which is very important for the survival of any private school.”

Over the decades the school has experienced some growing pains. For instance, in the early 1980s there was a period of decreased enrollment, according to Teplitz. Students entering fourth grade transferred to the now-shuttered Solomon Schechter Day School of Raritan Valley in East Brunswick because there weren’t enough students to form a grade. But the school persevered and remained the lone Schechter school in central New Jersey for five years. (Solomon Schechter Day School of Essex and Union in Cranford moved to West Orange in 1985 and is now known as Golda Och Academy.)

In 2018 the Marlboro school dropped Schechter from its name and became The Hebrew Academy, which marked a shift in affiliation from the Conservative movement to a non-denominational Jewish day school.

“It behooved us to remove the Conservative tag line from our mission statement to make it more appealing to a wider audience,” Golan told NJJN in 2018. Golan said the school attracted students from all religious backgrounds, from unaffiliated to Orthodox. Children participated in the annual “Thanks and Giving,” during which each grade donated items to a variety of charities. Photos courtesy Hebrew Academy

Golan said that every year the school gets children whose parents send them there because they have experienced anti-Semitism in their former schools.

“We are raising the next generation of Jewish leaders,” she said. “In a world in which we see anti-Semitism rising, we help to raise children who are proud to be Jewish.”

Curriculum at The Hebrew Academy includes Hebrew language, Zionism, Torah, Jewish history, and challenging secular subjects, as well as a gifted and talented program. Golan said that 100 percent of students who apply to magnet high schools are accepted.

Over the years, the campus footprint has expanded. The school completed a building expansion in 1999 and now has 16 classrooms, a library, technology and science labs, a music and art room, a multi-purpose space, a kitchen, and more.

The middle school (grades six-eight) opened in 2000 and graduated its first eighth-grade class in 2003. A pre-K class for 3 year olds started in 2006, and an early childhood wing and a renovated science lab were dedicated during the 2012-13 school year.

“Our future is very bright,” said Macnow, who said the $6 million capital campaign, launched with a $500,000 gift from the Marion and Norman Tanzman Charitable Foundation, has raised $2.6 million dollars. Once the campaign brings in $3 million, construction will begin in stages, starting with refurbishing the existing building, adding the gym and auditorium, 12 classrooms, and later a sanctuary and full-size kosher kitchen.

Sarah Cooperman of Marlboro, who has attended the school since pre-K and will graduate this year, summed up what the school has taught her: “Jewish values, confidence, independence, and work ethic” that has “inspired me to have a strong Jewish identity.”

For Teplitz, bringing Amalya — and next year his son, Elijah — to the same school that shaped his Jewish identity was special for him and his wife, Michelle, who is the cantor at Marlboro Jewish Center.

“My daughter will sit in the car and start singing Jewish songs,” he said. “She can recite Ma Nishtanah [the Four Questions] and the Shabbat blessings. She looks forward to Sukkot and Purim and has a Havdalah ceremony coming up in January she is very excited about.

“Having those experiences at a young age will keep Judaism as a central part of her life no matter what she does in the future,” he said. “I’m grateful to the school for providing that.”