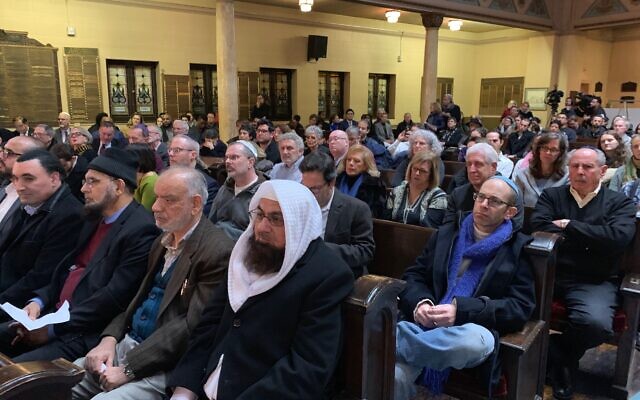 A diverse crowd of some 250 people filled the pews of Temple Beth El, a Reform synagogue in Jersey City, on Wednesday in a vigil for the four victims, including two members of the Satmar chasidic community, who were gunned down in a shootout at a kosher grocery store in the Greenville neighborhood the day before.

As investigators continue to probe the motives of the two suspects in the attack, who died in the shootout, community leaders and clergy emphasized the importance of unity in the wake of an attack against the Jewish and general communities.

“When I think about my heaven,” said the Rev. Laurie Jean Wurm of nearby Grace Church Van Vorst, observing the diversity in the crowd, “it’s going to look like this.”

Jersey City, across the Hudson River from Manhattan, is reeling from the shooting, in which a man with alleged ties to a Black Hebrew Israelite cult and a female accomplice allegedly shot and killed a police detective before storming the JC Kosher Supermarket and gunning down one of its owners, Leah Mindel Ferencz, 33; a Jewish bystander, Moshe Deutsch, 24; and an employee of the market, Miguel Douglas Rodriguez, 49. 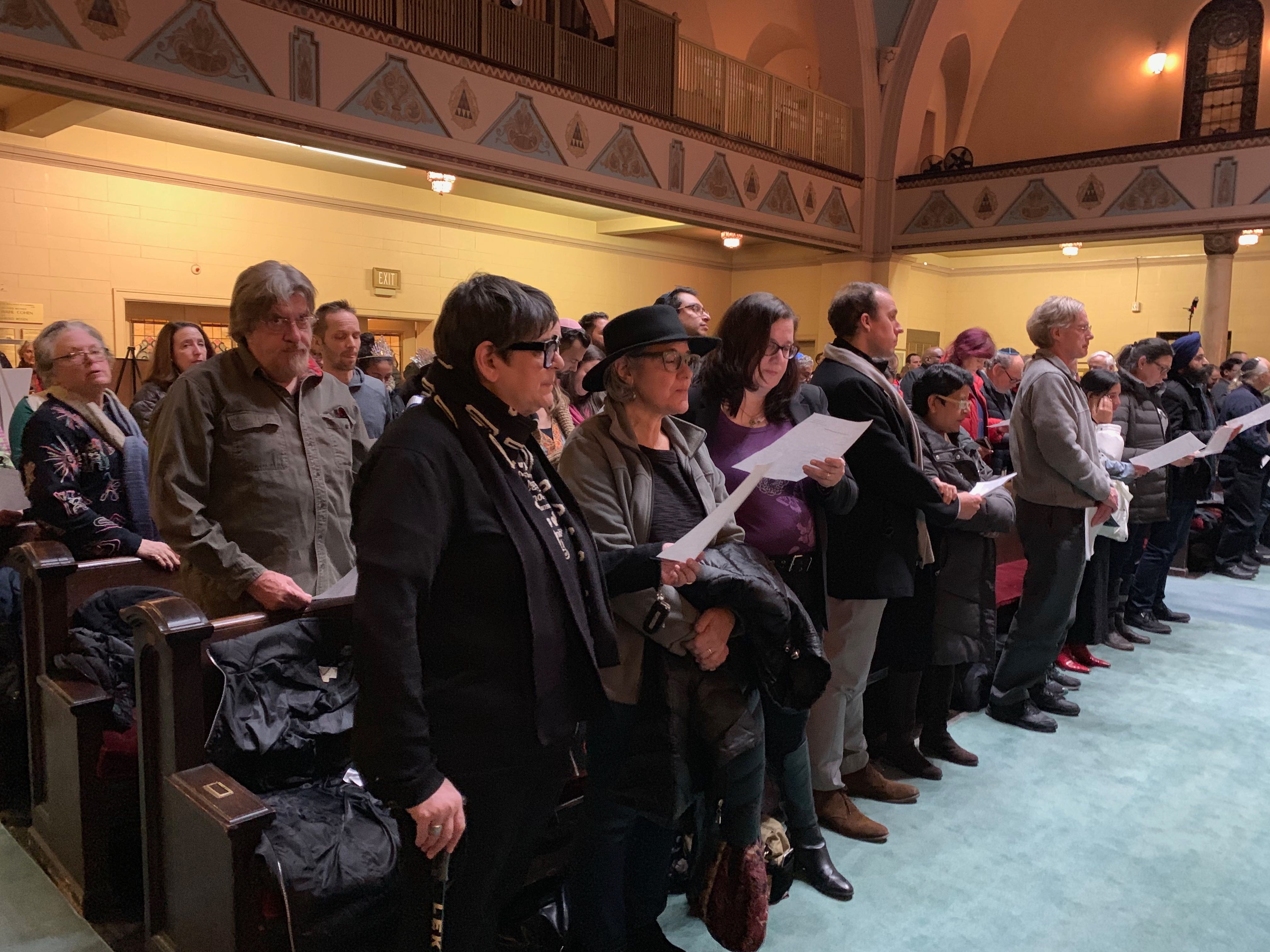 Craig Carpenito, U.S. Attorney for the District of New Jersey, said at a news conference Thursday that investigators would treat the matter “as a domestic terrorist event with a hate crime bent,” and said “the motivations appear to clearly be both a bias towards the Jewish community and law enforcement.”

The state’s attorney general, Gurbir Grewal, concurred, adding, “We continue to gather evidence regarding the motives of the shooters; we have identified a number of social media accounts that we believe were used by the suspects, and purport to espouse certain viewpoints,” he said.

Noting that he had just spoken with members of the state’s interfaith advisory council, Grewal added, “We are committed to ensuring the safety of all religious communities in the state.”

“Something’s been unleashed, and we have to be vigilant,” Rabbi Leana Moritt, spiritual leader of Temple Beth El, told NJJN. At a press conference before the vigil, she said, “This is not our first Pharaoh.”

Andrew Gross, executive director of the New Jersey-Israel Commission, spoke at the vigil on behalf of Governor Phil Murphy, who was not in attendance. He received a standing ovation when he thanked members of law enforcement for putting themselves in harm’s way. The officer killed in the attack was Detective Joseph Seals, 39, a 15-year veteran of the Jersey City Police Department and a married father of five. 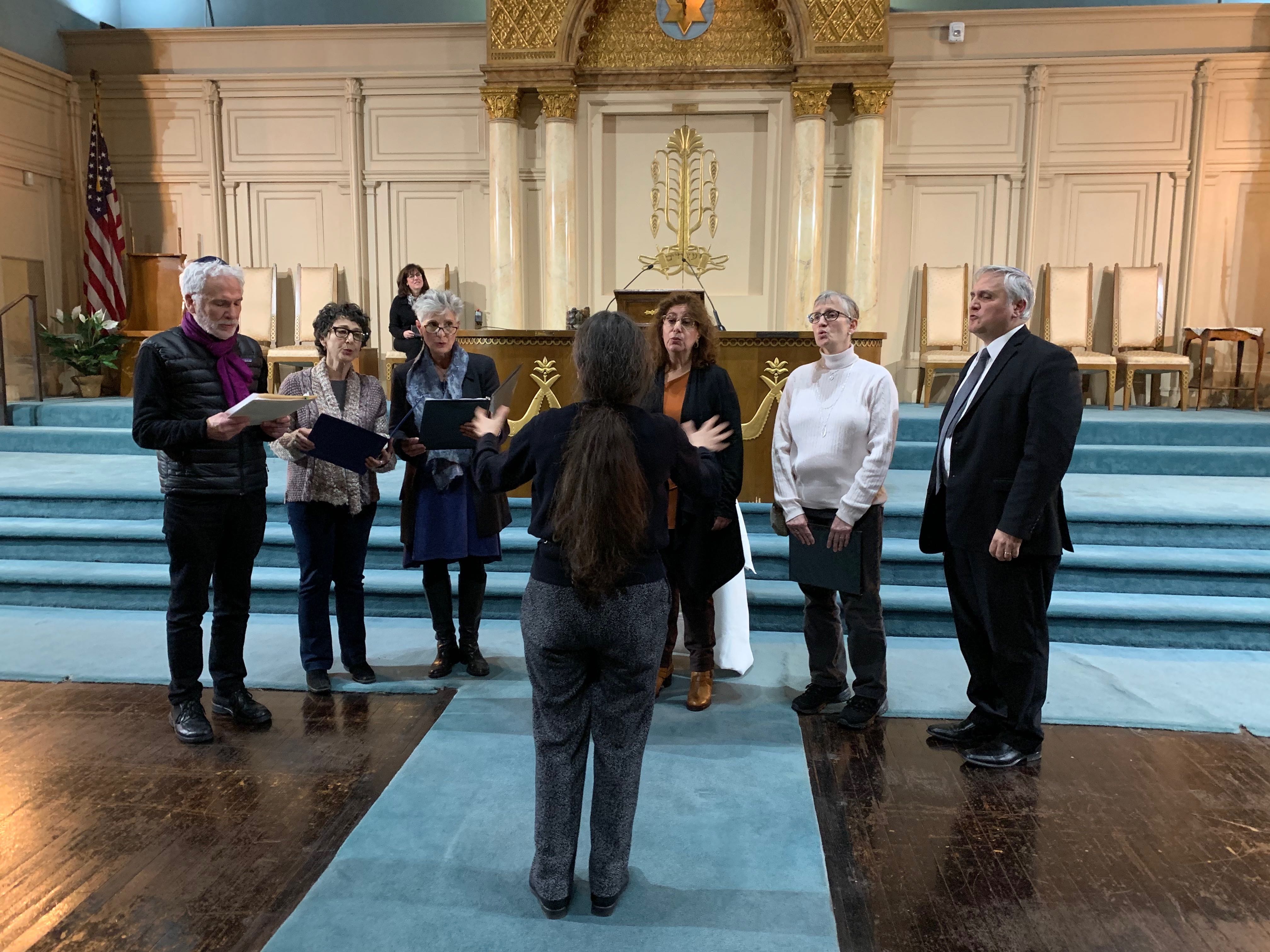 The choir from United Synagogue of Hoboken sang verses from the Declaration of Independence as well as Eili, Eili, from a poem by Hannah Senesh, set to music by David Zahavi. Johanna Ginsberg/NJJN

There was overriding shock that an apparent anti-Semitic attack could happen in Jersey City.

“For it to happen in a location where everyone is from different backgrounds, different cultures, it’s devastating,” Jessica Berrocal, chairwoman of the Muslim Caucus of the Democratic State Committee and a Jersey City resident, told NJJN.

Jasmine McTague, a former Miss Jersey City, told NJJN, “This is our community. We need to stand together in solidarity. There’s no place for what has happened.” McTague came with her daughters, Farid Wahby, 12, and Yasmina Wahby, 13, and husband James McTague. 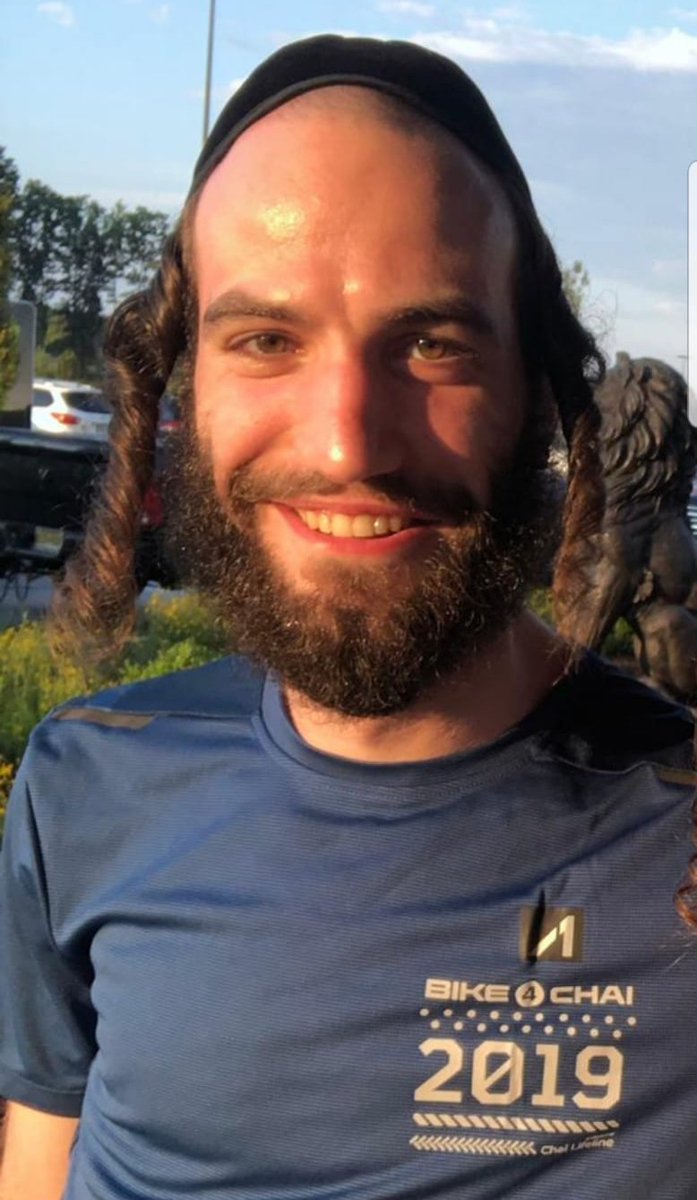 Moshe Hersh Deutsch was killed in the shooting. Courtesy of Chai Lifeline

“These times call for community coming together,” said Mr. Sing, a Sikh who requested his first name not be used because he was concerned about his safety, having been targeted in the past. “We’re all part of this city called Jersey City.” He added that while hate-based violence is becoming more prevalent, “out here, in our own neighborhood, it’s even more tragic.”

Most of the Jewish residents of the Jersey City area NJJN spoke with said they couldn’t remember overt anti-Semitism in recent years. However, Beth El president Tom Rosensweet said that flyers were posted around town just a few weeks ago claiming that “78 percent of [American] slave owners were ethnic Jews,” and that “only 0.35% of white Americans owned slaves.” The latter claim has been widely circulated by white supremacists but, according to historians, is grossly inaccurate. Rosensweet wondered whether the posters and the shooting were related.

A few people who know the neighborhood well suggested that the incident reflected a general undercurrent of resentment rather than anti-Semitism per se. More than 100 Satmar families have moved into the once largely African-American Greenville neighborhood in recent years, in part in search of affordable housing.

Felix, who did not provide his last name, is an Uber driver from Harrison who also works at Eppes Essen, a kosher-style deli in Livingston. He acknowledged that the attack seemed to target the kosher market, but he said it might not be anti-Semitism as much as “resentment toward anyone able to move their lives forward.” 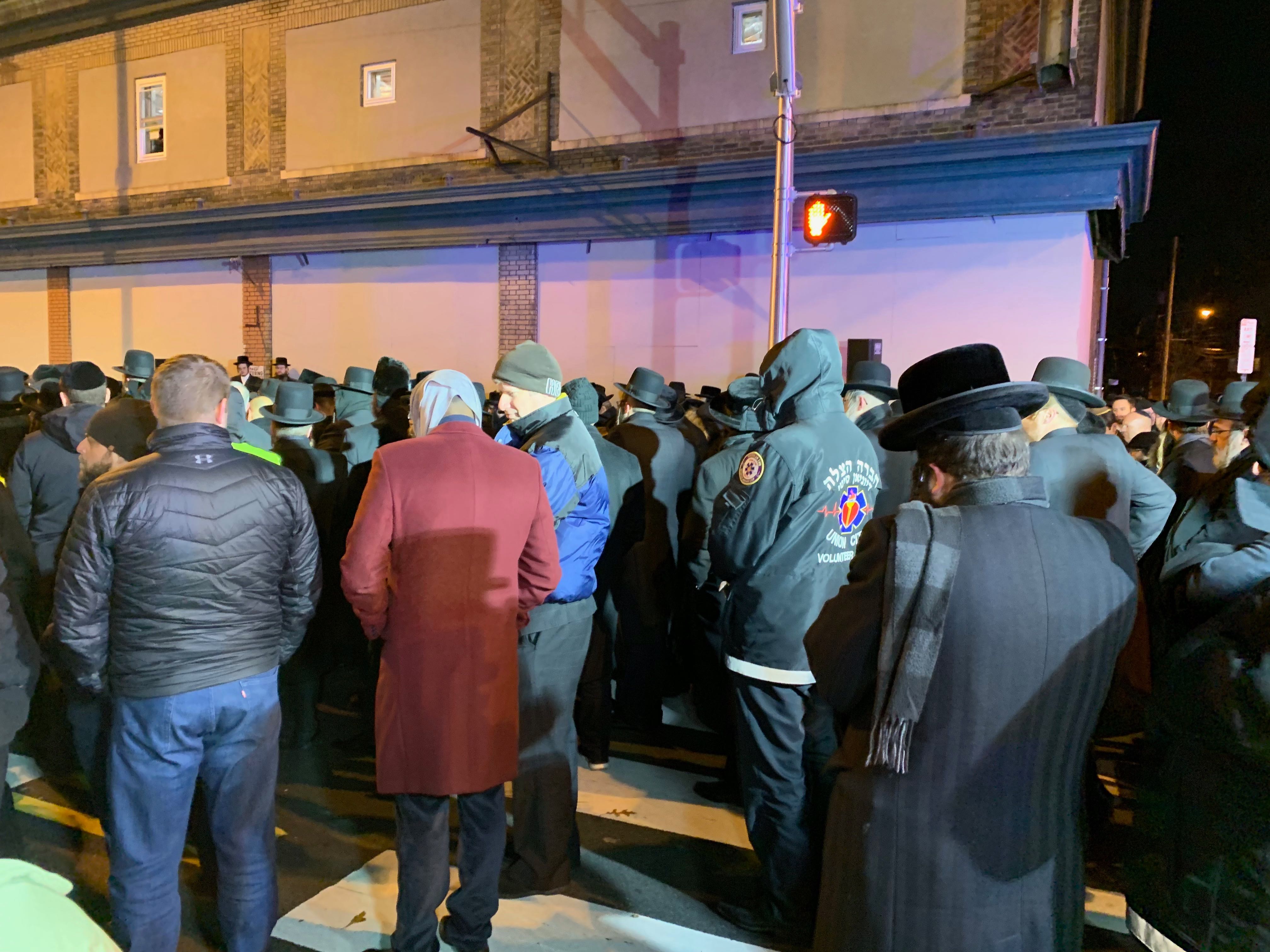 Mourners, mostly from the Satmar Hasidic community, were joined by other members of the community at the funeral.Johanna Ginsberg/NJJN

Along those lines, Kay Magilavy of Union City, a past president of Beth El, said, “There’s concern that any group coming in is going to price current residents out of the area.”

In his remarks, Dani Dayan, consul general of Israel in New York, raised the specter of the Holocaust. “We know what happens if we do not erase anti-Semitism immediately when it appears,” he said.

Moritt sang, “Open the gates of righteousness for me” in Hebrew, and invited people to shake hands with someone nearby, to “look into their eyes and see their humanity.” Strangers embraced. 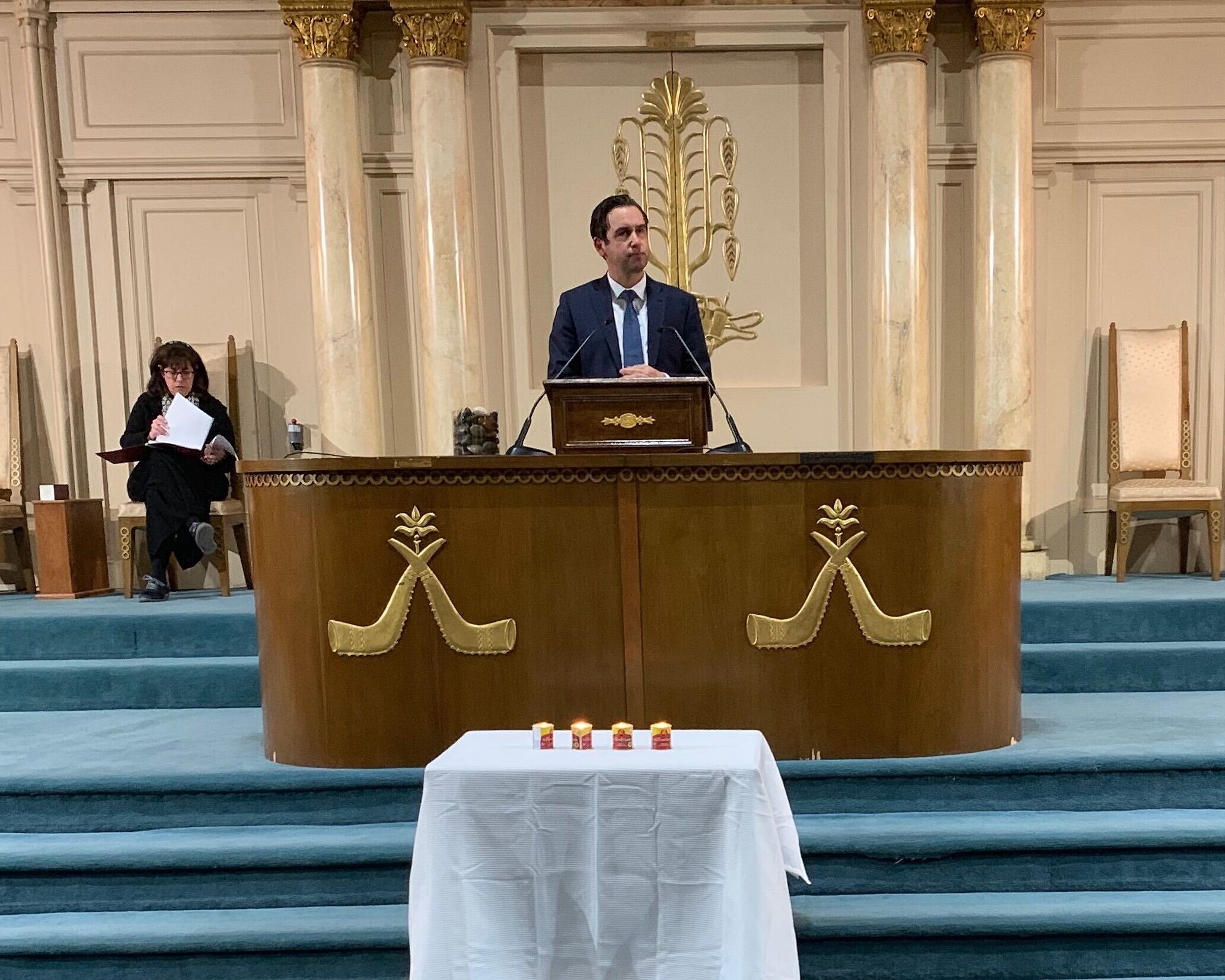 “An attack on one of us is an attack on all of us,” said Mohammed Ali Chaudry, co-founder of the NJ Interfaith Coalition.

Among the Jewish attendees were many who had not been to a synagogue in several years, or in some cases, decades. “After yesterday, I wanted to reconnect with my Jewish heritage,” said Rebecca Schwarz, 29, an attorney and Jersey City resident. “I was upset,” she said, but that was before she realized the attack had targeted a kosher market. Now, “it’s just shocking.”

Gary Greenberg, a lifelong resident of Jersey City, said that if what happened the day before “doesn’t get me to shul, nothing will. I’m just sad and upset and disgusted by what happened. I thought it was a good time to come and share with everybody…. I guess there’s resentment that I wasn’t aware of.”

Mayabea Schechner, a Jersey City resident who grew up in Short Hills and is a member of Oheb Shalom Congregation in South Orange, has shopped at the kosher market from time to time. “It never occurred to me it would happen right in my own backyard,” she said. 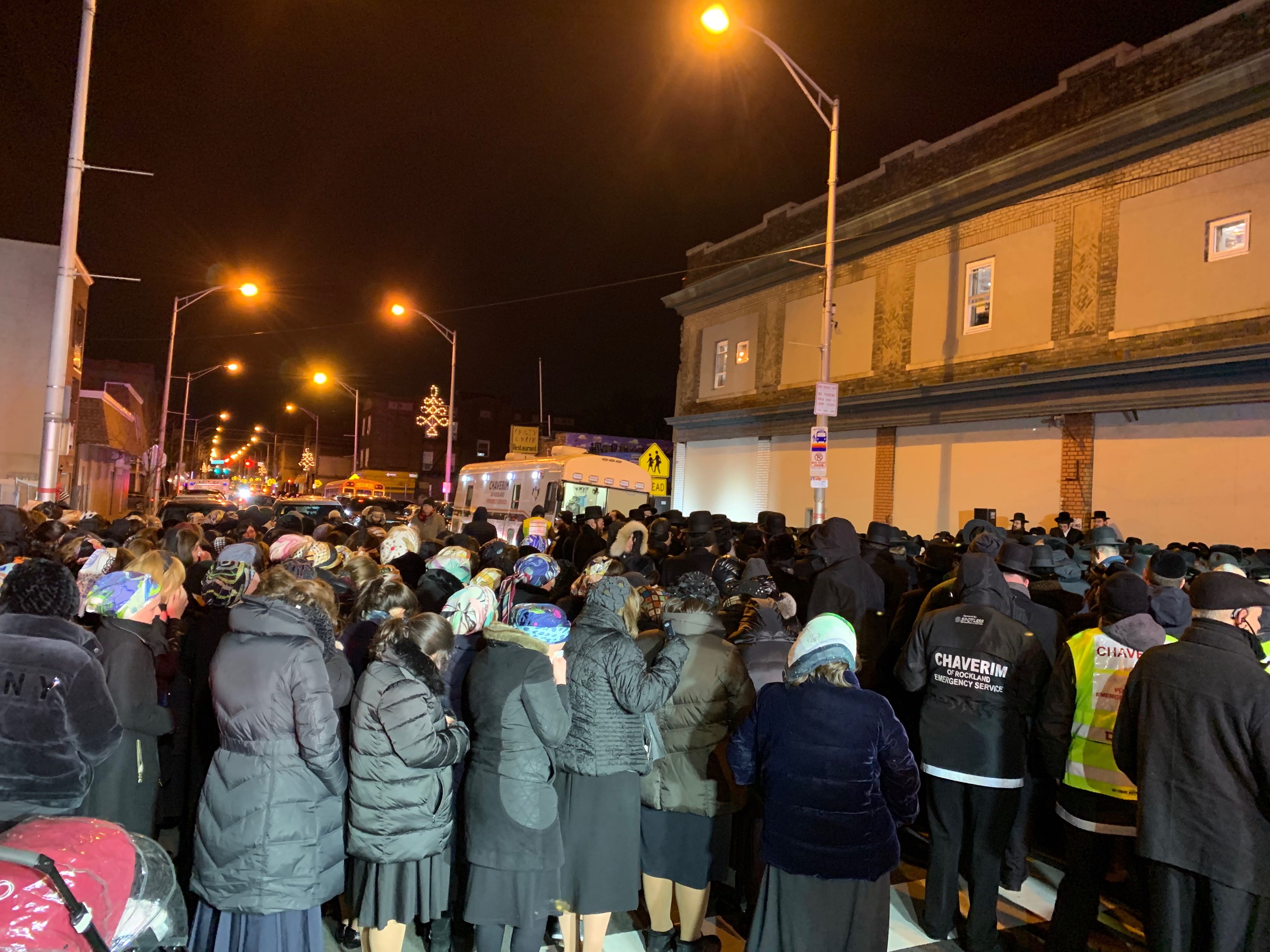 Her father, Michael Schechner of Short Hills, was there as well. “I came to be with the whole community, the Jewish community and the Jersey City community,” he said. “I knew I had to be here tonight to show my support. What I’ll do tomorrow to help I’m not yet sure.”

Leslie Dannin Rosenthal, immediate past president of Jewish Federation of Greater MetroWest NJ, said, “This is our family. It was important to be here and stand with Jersey City.” She found the sense of solidarity that brought out the whole community moving. “I really didn’t expect that.”

Sheryl Hoffman of Jersey City, a former president of Congregation Beth El in South Orange, where she used to live, came with her husband Marty. She called the event “very frightening and very scary.”

The granddaughter of Holocaust survivors, she said, “When is this going to end? What are we going to do?” She added, “It’s great to be comforted by everyone but my grandmother would be rolling in her grave … We have to fix this for our children.” She was unaware until the incident of the kosher market in town. Now, she said, “I’m going to start shopping there.”

No one from the chasidic community attended the vigil. Moritt said she had reached out, leaving a message for the group’s rabbi, but did not expect them to enter a Reform synagogue.

The timing of the Beth El vigil coincided with the outdoor funeral a few blocks away of Leah Ferencz, a mother of three. Men and women huddled in separate groups in the cold evening to hear the eulogies in Yiddish over a loudspeaker. Women dabbed their eyes with tissues and wailed softly at times; the voice of the speaker was wrenched with emotion.

Since the shooting, Dov Ben-Shimon, CEO and executive director of Jewish Federation of Greater MetroWest New Jersey, has issued statements underscoring federation’s continued contact with law enforcement and community leaders, and he offered assurances from Grewal regarding the safety of the Jewish community. Ben-Shimon emphasized that “There is no known threat against the Jewish community.”

Robert Wilson, federation’s chief security officer, said he is working to reach out to Jewish businesses to ensure they have proper safety protocols in place. To that end, he said that business owners who would like to discuss security with him should reach out at 973-929-2921 or rwilson@jfedgmw.org.

In addition, federation has established a donation webpage where all collections will go to an established 501c3 that will provide services and support to the victims’ families. Visit jfnnj.org/supportjerseycity.