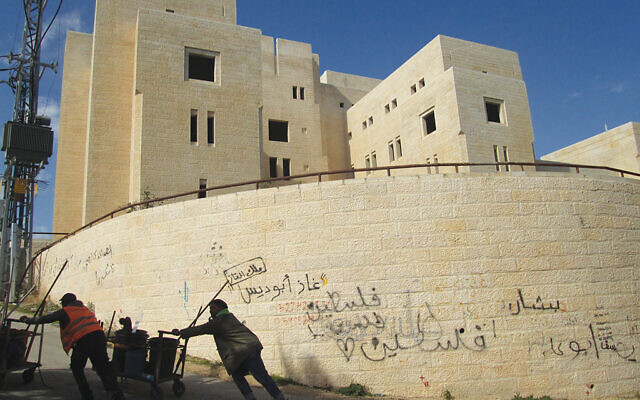 The large stone building in Abu Dis that — according to the never-adopted Beilin-Abu Mazen peace plan of the 1950s — was supposed to be used as the Palestinian parliament is empty, its walls covered in graffiti. Photos by Michele Chabin

The one that bothers him most: that the capital of any future Palestinian state would be headquartered in this dusty, neglected town just beyond the towering security wall Israel built at the tail end of the second intifada to prevent terrorists from entering Israel.

The wall has done what it was supposed to do, but its presence has left Palestinians on the other side feeling hopeless.

“From what we’re hearing, the plan says this will be the capital and that Israel will have sovereignty over virtually all of east Jerusalem,” said Abu Mustafa, a 34-year-old taxi driver who doesn’t have an Israeli I.D. card, and therefore can’t enter Jerusalem without a nearly impossible-to-obtain permit from Israel.

The father of three called Trump’s plan, unveiled on Jan. 28, “ridiculous” and “immoral,” and said he and his fellow Palestinians will never accept it.

“In addition to being utterly impractical — I mean, look at this place,” Abu Mustafa said of Abu Dis, whose narrow, potholed streets can barely sustain the residents and university students already living and studying here.

“Every meter of east Jerusalem belongs to Palestinians. We’re not going to agree to any capital that doesn’t include the Old City and every Arab town and village,” he said in a determined voice.

The U.S. peace plan, which was drafted in coordination with Prime Minister Benjamin Netanyahu’s right-wing government with no input from Palestinians, has rattled both Palestinians and Israelis.

Under the plan, Israel will be allowed to annex all West Bank settlements, but must freeze settlement construction for four years. The plan also foresees the creation of a Palestinian homeland, with tunnels connecting the West Bank to Gaza.

One of the Palestinians’ most fervent demands — that refugees and their descendants be repatriated to what is now Israel — isn’t addressed.

According to the plan, the Palestinian capital will be comprised of a hodgepodge of east Jerusalem and West Bank villages and towns, including Abu Dis, and the squalid Shuafat refugee camp.

Whether Abu Dis lies in east Jerusalem or the West Bank depends on whom you ask.

“I grew up in east Jerusalem, and for us, Abu Dis and these other villages were suburbs of Jerusalem,” said Khaled Abu Toameh, an Arab-Israeli lecturer, filmmaker, and journalist. “They’re outside the municipal boundaries of Jerusalem, according to Israel. They’re artificial boundaries, but that’s another discussion.”

Regardless of their current status, Abu Toameh said, Palestinians don’t want a capital in some backwater.

“It’s like telling Israel, we’ll give you a capital in south Tel Aviv,” a down-on-its-luck area in the shadow of Israel’s thriving cultural capital.

This isn’t the first time peace negotiators have floated the Abu Dis-as-capital idea.

In a plan authored by Israeli negotiator Yossi Beilin and Abu Mazen (Mahmoud Abbas, who is now the Palestinian president) in the mid-1990s, Abu Dis was to serve as the capital, but the Palestinians would be in control of Arab areas of east Jerusalem.

The plan was never adopted, of course, and the Palestinians have long since rejected it.

The large stone building that was supposed to be used as the Palestinian parliament is empty, its yard filled with litter.

Standing on the roof of his in-laws’ house, which affords a panoramic view of east Jerusalem and the Al Aqsa mosque beyond the security wall in their backyard, Abu Dis Mayor Ahmad Abu Hilal said his town could never serve as the capital.

“We have no room to expand, except for a small part in the east, because we’re surrounded by settlements and the wall.”

Abu Hilal said the wall has ruined the lives of many of the town’s residents.

“All our hospitals are in Jerusalem, our holy mosque is in Jerusalem. If you don’t have an entry permit you can’t get there at all.”

Before the wall was built, residents could drive to the Old City in about 10 minutes. Now, due to the circuitous route and the checkpoint, it takes 35 to 45 minutes.

Issam Faroun, the mayor of adjoining Aizaria-Betheny, which would also be incorporated into the Palestinian capital, said the wall has “completely isolated” the town of 40,000 from central Jerusalem. That has led to widespread unemployment, he said.

“Imagine living right next to Paris, but being isolated from Paris,” Faroun said. “Our lives since the wall are upside down. It was like a tsunami hit us. Suddenly our pregnant women got stuck at the checkpoints on their way to the hospital in Jerusalem.” 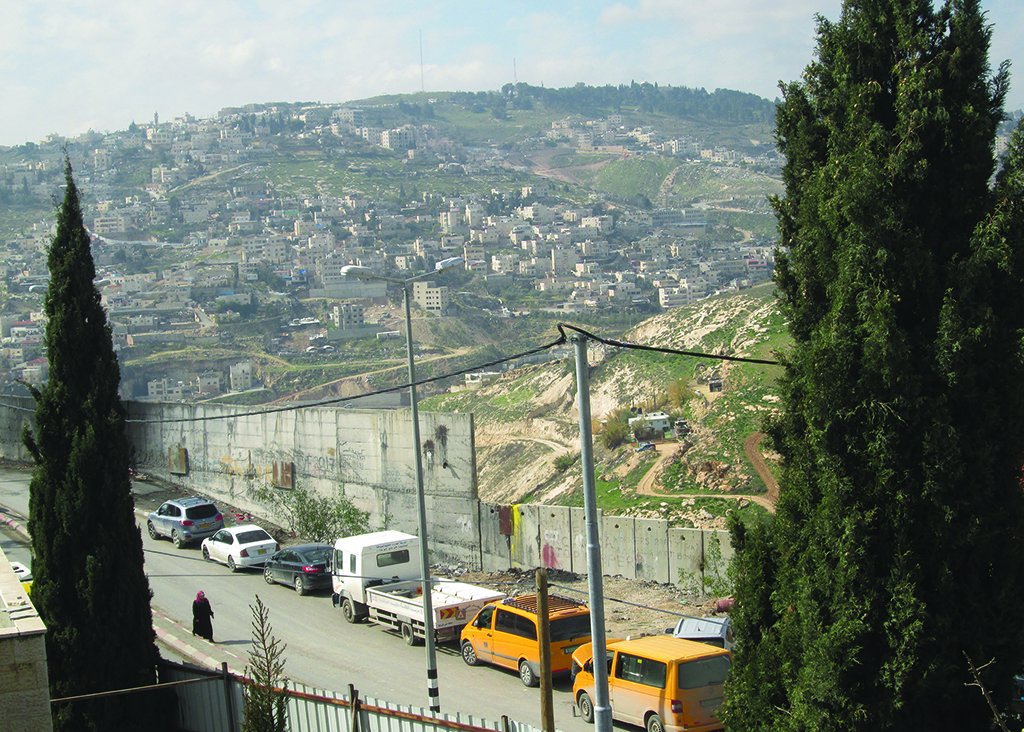 The security wall Israel built to keep out terrorists more than a decade ago has done just that, but has cut off access for hundreds of thousands of Palestinians.

Seated in his office in the municipality, Faroun laughed at the notion that Aizaria-Betheny could serve as part of the capital.

“The only thing that is important about us is our location, but without Jerusalem we are nothing. How can we be a capital if we have sewage problems, infrastructure problems? We don’t have anything.”

Faroun said the only thing keeping him from despair are the hundreds of thousands of Christian pilgrims who visit his town’s holy sites.

“When I see the tourists here I feel less isolated and more optimistic.”

The mayor said the area’s young people are desperate to escape the confines of the wall.

“They want to build a life, a home. Those with an Israeli ID card move to the other side. Those that don’t, want to emigrate,” he said.

Unlike the intifada years, most young Palestinians want to spend time at a university and not in the streets, both mayors said.

Perhaps this is the reason there have been few protests against the Trump plan, at least for now.

Khaled Al Daher, deputy head of the Fatah movement in Aizaria-Betheny, believes there is another reason for the low-key response.

“People will react only when or if the plan is implemented on the ground. Until then, it’s just talk,” Al Daher said in a room filled with the smell of stale cigarettes and a huge painting of the Al Aqsa mosque.

The Fatah activist said his faction learned of Trump’s plan before it was announced, and that “it would be one-sided.”

“No Palestinian leader will ever agree to a state that isn’t according to the ’67 borders,” Al Daher declared.

Since the Trump plan was unveiled, some Palestinian officials have rejected anything short of a Palestine that extends “from the river to the sea.” In other words, a state that replaces Israel.

Asked by NJJN whether Palestinians regret not accepting the United Nations’ plan that would have created a Palestinian state along these very borders, Al Daher grew thoughtful.

“Personally, speaking personally, yes, I regret we didn’t accept what we were offered back then.”