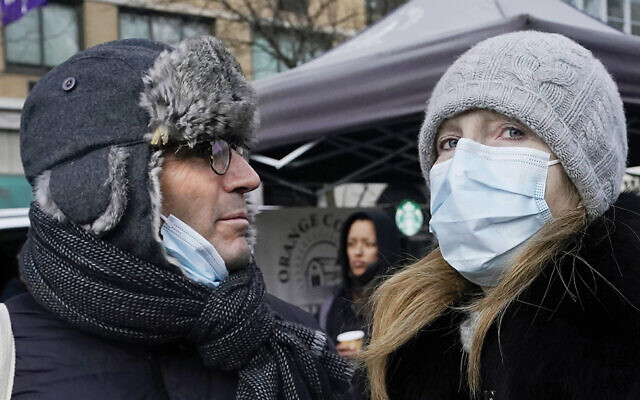 Tourists wearing masks amid fears of the coronavirus and a global pandemic. Photo by TIMOTHY A. CLARY/AFP via Getty Images

Welcome to the age of coronavirus where kissing mezuzot and prayer books is out and air kissing the Torah is in, shaking hands is eschewed in favor of elbow bumping, and attending services is replaced by live streaming.

Synagogues around New Jersey are reevaluating everyday activities and building protocols to minimize the spread of germs. This past Shabbat numerous synagogues were closed until further notice. Others curtailed social activities, such as East Brunswick Jewish Center which is holding services, recommending that congregants sit at least six feet apart, but canceling kiddush and other programs through March 31. One congregation closed for a day to conduct a deep cleaning, and another is asking congregants to leave borrowed tallitot on pews for cleaning and inviting them to keep borrowed kippot. Another synagogue suspended a long-held practice of holding hands at the end of services.

When handling food many synagogues have moved to prevent unnecessary contact — challah is pre-sliced and handed out by individuals wearing gloves, food is served by staff or volunteers at kiddushes, communal bowls of snacks are out, and disposable gloves are provided for taking serving utensils.

Most have placed plenty of hand sanitizer and disinfecting wipes in heavily trafficked areas and a number of them have cancelled programs involving large crowds and close quarters. A few synagogues cancelled their Purim carnivals altogether while others dropped individual activities such as face painting or bounce houses. And, of course, congregants are being asked to wash hands frequently, cough into their arms or, preferably, a tissue, and stay home if they show any signs of illness.

While some synagogues have formed special committees with physicians and other specialists to determine how to react to the crisis, others are leaving such decisions to their executive committees, presidents, executive directors, and rabbis in consultation with doctors, Centers for Disease Control and Prevention (CDC) guidelines, and local health departments.

One particularly surprising measure — even in light of the crisis — to hit the Garden State Jewish community came on March 12 when the Orthodox rabbinical association in Bergen County ordered its affiliated shuls to close for all religious services and classes beginning last Friday.

The Rabbinical Council of Bergen County announced the “difficult decision” in an email, saying its leaders had met with local government and three area hospitals and agreed the measures were necessary to slow the spread of the coronavirus “before their resources are overwhelmed.”

“Please daven at home, individually,” said the council, which represents synagogues in Teaneck, Englewood, and other communities with large Orthodox populations.

The council also said there should be no public celebrations, shiva visits should be replaced by phone and video calls, funerals should be restricted to small groups of family members and a minyan of worshippers, and kosher restaurants should not seat customers. Ritual baths, or mikvaot, will remain open, but will bar women under quarantine or who are showing symptoms of illness.

“These measures are adopted as a reflection of our overarching commitment to the sanctity of human life, and we pray that these will be very temporary measures,” the statement read.

The Jewish Federation in the Heart of New Jersey is deferring to guidance from the CDC. On March 12 Executive Director Susan Antman sent a community-wide email announcing that, “at this time,” it was postponing all events scheduled through April 24.

“Jewish life is best lived together. In fact, many of our traditions and rituals command us to gather with others,” she wrote. “At a time when Coronavirus (COVID-19) concerns are sweeping our community and world, we are reminded of pikuach nefesh —  ‘saving a life’ — the principle in Jewish law that the preservation of human life overrides virtually any other religious rule.”

Even so, Antman wrote that federation will continue to monitor the “fluid situation” and “we do not anticipate cancelling events altogether.” For now, at least, federation’s Women’s Philanthropy Main Event with Israeli chef Adeena Sussman is still scheduled for May 13 at the Marlboro Jewish Center.

In a blog on the Rutgers Hillel website, Executive Director Andrew Getraer wrote that the organization would be instituting its own preventative measures following last week’s announcement by Rutgers University in New Brunswick that students are to vacate residence halls as of spring break and for a few weeks afterward when classes will resume remotely. Rutgers Hillel is “dedicated to providing support for our students to the greatest extent possible under current campus conditions,” Getraer wrote.

The Eva and Arie Halpern Hillel House, including The College Ave Café, will be closed to the public through April 15, and the Alternative Spring Break trip to Colombia has been cancelled. However, he wrote, Hillel staff will be available to meet with students by appointment, and even though they will not host full Shabbat dinners, they are “developing alternative Shabbat experiences” that adhere to the various health restrictions. Getraer added that the staff is “assessing alternative ways to address Passover, services, classes, etc.”

The chair of March of the Living, which brings thousands of young people to Poland each year to give them an up-close view of the Holocaust, announced, “with a heavy heart,” that this year’s march has been canceled.

The Jewish Week Media Group, NJJN’s parent company, postponed its Grand Wine Tasting event, which had been scheduled for March 16 in New York City, and hopes to reschedule it a few weeks prior to the High Holidays. “We deeply regret this, but this health concern is most significant and the need to be responsible and not put anyone at risk is paramount,” wrote publisher Rich Waloff in a statement.

Last week New Jersey joined several other states in declaring a State of Emergency to help contain the spread of coronavirus. It came a day before health officials announced the state’s first death attributed to the virus. At press time there were 29 positive cases of coronavirus in New Jersey and one death.

“The State of New Jersey is committed to deploying every available resource, across all levels of government, to help respond to the spread of COVID-19 and keep our residents informed,” said Gov. Phil Murphy.

The declared State of Emergency is a required step to open assistance from the federal government and allows the New Jersey Office of Emergency Management to act on behalf of the governor to utilize resources and tap into other sources of funding to aid localities. In addition, the declaration safeguards consumers by prohibiting excessive price increases and expedites the delivery of goods and services necessary for preparedness and response efforts.

“Our executive order declaration will allow us to stay ahead of this, and we will get through this together,” said Lt. Gov. Sheila Oliver at a March 10 press conference. Two days later Murphy recommended that all public events of more than 250 people be cancelled immediately. Also on that day, New York City Mayor Bill de Blasio declared a State of Emergency, and New York Gov. Andrew Cuomo banned gatherings of 500 or more people for the next month, which includes all Broadway shows.

The Jewish Educational Center (JEC, Bruriah, and Rav Teitz Mesivta Academy) in Elizabeth and Golda Och Academy (GOA) in West Orange, which students from Middlesex and Monmouth Counties attend, announced that they are temporarily suspending classes — GOA will be closed through Passover break and JEC “until further notice,” according to a letter sent by Rabbi Pinchas Shapiro, JEC executive vice president.

The Joseph Kushner Hebrew Academy/Rae Kushner Yeshiva High School (JHKA/RKYHS) in Livingston, another day school with local students, announced on the same day that it would move to an online “learning format” until March 20, and hopes to resume in-person classes on Monday, March 23.

GOA had faculty and students in self-quarantine last week. Nineteen students and two faculty members at GOA were told to stay home from school March 5 and 6 after participating in the Jewish Canadian Youth Model UN because a group from SAR high school in Riverdale — members of at least one family in the school have tested positive for the virus — was in attendance. The GOA students returned to school on Monday, March 9, after confirmation that the SAR students who attended the Model UN had no symptoms following their potential exposure.

Shapiro sent out an email on March 6 informing the school community that two JEC faculty members were in self-quarantine after “the New York State Department of Health revised their self-quarantine guidance to include all those present” for a Feb. 29 funeral at the Young Israel of New Rochelle, “due to a newly confirmed case of COVID-19” of someone who was in attendance.

As of press time, none of the students or faculty from GOA and JEC in self-quarantine were reported to have displayed any symptoms.