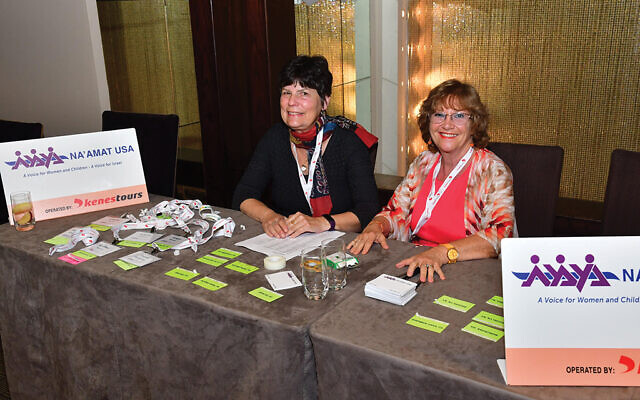 Janet Gurvitch, the new president of NA’AMAT USA, first learned about the Zionist women’s organization, then called Pioneer Women, from her grandmothers. Now her daughter-in-law and granddaughter are also members, making her, she told NJJN, “the third of five generations of members of NA’AMAT.”

Gurvitch, of East Windsor, was elected on Nov. 7 at NA’AMAT USA’s 43rd convention, in Israel.

Founded in New York City in 1925, Pioneer Women drew its members from the Eastern European immigrant generation who were committed to Zionist ideals. The organization’s mission was set: to provide social welfare services for women and children in prestate Israel, help immigrants acclimate to their new life there, and encourage American-Jewish women to play a greater role in Israel and Jewish community affairs.

The idea behind Pioneer Women, known since 1981 as NA’AMAT, was to “be equal partners in building the State of Israel,” Gurvitch said. Her own family lived out this ideal. One of her grandmothers, who owned an egg farm in Toms River, exported turkey chicks to Israel to help in the creation of the turkey industry there.

The members of NA’AMAT USA partner with 300,000 counterparts in NA’AMAT Israel to support social services for women and children in Israel. For example, its daycare centers serve 17,000 children; students who do not do well in traditional academic settings often thrive in the organization’s 17 technological high schools; and 200 NA’AMAT scholarships enable qualified women to pursue graduate and post-graduate work in science, technology, engineering, and mathematics.

At the November convention, Gurvitch said, delegates were taken to many of the organization’s projects and installations. Among other sites, they visited NA’AMAT’s Kanot Youth Village, near Gedera, a residential high school for disadvantaged, challenged, and at-risk teens; the Glickman Center, a new shelter for battered women and their families in Sderot; and the Golda Meir daycare center in Tel Aviv.

In the States, NA’AMAT USA advocates for legislation advancing women’s rights, child welfare, and educational initiatives. Its membership is organized among four areas across the country, with each encompassing councils and, within them, local clubs. The national office is in Canoga Park, Calif.

With about 7,500 members today, representing a drop from its highest level of about 50,000 around 1980, NA’AMAT USA is taking a more proactive approach as it looks to the future, Gurvitch said.

“Even in our heyday, we felt we were the best-kept secret; we focused on the work we did and very little on promotion,” she said. “But we are now looking to have events and draw people to join us via social media.” These events range from speakers to “shopping for a cause” in support of women and children in Israel, to networking and promoting greater support for the State of Israel. NA’AMAT is also looking to format its activities in a way more conducive to women in today’s world “who are not looking to volunteer in clubs”; for example, formal meetings may be held just a few times a year.

NA’AMAT USA is also planning an observance of International Women’s Day on March 8. This global event both celebrates the social, economic, cultural, and political achievements of women and is a call to action for accelerating gender parity. Because the day has received little support in the United States, even from major women’s organizations, Gurvitch said, “NA’AMAT feels it is important to join our sisters worldwide in making people aware of International Women’s Day.”

In recent years, she said, NA’AMAT celebrated the day “by highlighting its support for scholarships for young women in Israel who are looking to obtain degrees in law and STEM studies.” NA’AMAT scholarships have been named in honor of Ruth Bader Ginsburg, Rona Ramon (widow of Israeli astronaut Ilan Ramon, who died in the Columbia space shuttle disaster), and the late Nechama Rivlin, researcher, science secretary, and First Lady of Israel.

Gurvitch also expressed concern about the rise of anti-Semitism and said that “anti-Zionism is another form of anti-Semitism, and we have to get people to be aware of that.”

Active at the local levels of NA’AMAT when she lived in New York, Gurvitch became involved in the Brooklyn Council. She was part of a club that created a “teddy bear patrol” to provide stuffed animals for children visiting the Brooklyn District Attorney’s office with a mother who had suffered abuse. Members also collected personal items for women’s shelters and wrote letters and attended demonstrations in support of NA’AMAT’s national advocacy on such issues as a woman’s right to choose, paternity and maternity leave, and the right to a living wage.

Gurvitch’s rise to higher levels of NA’AMAT was nourished by the organization’s commitment to encouraging women to become leaders. After national officers recognized her for her service at the council level — where she chaired luncheons and fashion shows, created programming for holiday celebrations, and offered fund-raising workshops — she was invited to attend leadership training workshops. To enable her to learn about the national body, the organization sponsored her attendance at a NA’AMAT convention. She was also sent to a leadership seminar in Israel because, Gurvitch said, she was seen “as someone who might have the potential to be a national leader.”

Her first national role was as chair of the membership portfolio. Next she was named director of the Eastern Area, a position that, she said, “was part leadership, part networking and getting to know people and imbuing them with the spirit and passion for the work we do.” To forward those goals she created a women’s retreat in the Catskill Mountains.

As national co-vice president of fund-raising for the last six years, Gurvitch started a program for b’nei mitzvah students to raise money for NA’AMAT projects in Israel; Tech for Teens provides equipment for NA’AMAT’s technological high schools, and Teens for Tots supports its daycare programs.

Gurvitch, who has lived in New Jersey since 2001, has three sons and four grandchildren. She is a member of three congregations: Beth El Synagogue in East Windsor, Beit Shalom in Monroe, and the synagogue her sister belongs to in Omer, Israel. As a child, besides attending religious school, Gurvitch went to the Labor Zionist summer camp Kinderwelt in upstate New York.

Gurvitch’s volunteer activities with NA’AMAT have benefited her personal development, she said. “Being a volunteer…has been very supportive of my growing confidence and the skills I’ve attained through NA’AMAT — whether speaking skills or getting out of my comfort zone,” she said.

Being a NA’AMAT leader “has been empowering for me and gotten me to try new things for myself personally,” Gurvitch said. She attributes her willingness to start a new career as a financial planner at age 50 — almost 20 years ago — to her “early experience as a volunteer, to try things and not be afraid of failing.”