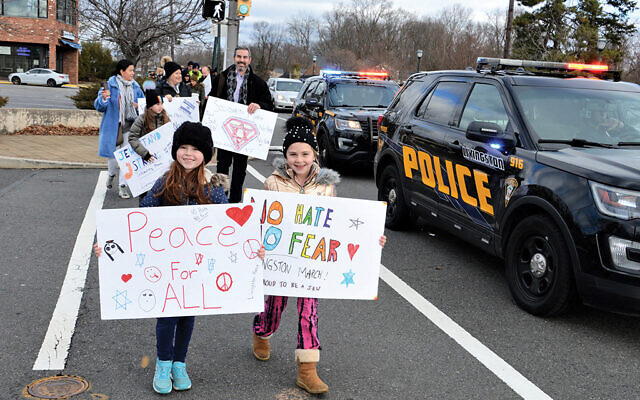 A march against anti-Semitism in Livingston, organized by Brandon Minde (center, second row) on social media. Photo by Jerry Siskind

Not everyone protesting anti-Semitism on Sunday was crossing the Brooklyn Bridge.

Over 200 people marched from the Starbucks on Mt. Pleasant Avenue to the Livingston Oval rather than the much, much larger rally across the Hudson. The goal? “To do something. To defeat evil. To provide an opportunity for those who wanted to march in solidarity against anti-Semitism, but could not get to New York City that morning,” said Brandon Minde of Livingston, who organized the local event with his wife, Claudia.

They had considered heading to the main Solidarity march, but didn’t think it would be practical with their three young children. Instead, just 48 hours in advance they posted on Facebook that they’d be showing support in their own way in Livingston, and assumed they’d be on their own. “We were shocked when over 200 people showed up Sunday morning to rally against anti-Semitism with us,” said Minde. “This seemed to fill a need.”

The group gathered at Starbucks to make posters and then marched from there. At the oval, four speakers addressed the crowd: Brandon and Claudia Minde, Livingston High School junior and president of the Livingston girls’ chapter of B’nai B’rith Youth Organization Ellie Barshad, and Ilyse Shainbrown, a Livingston resident and director of Holocaust education at Jewish Federation of Greater MetroWest NJ.

It was also a much shorter affair than its sister march over the river, lasting a total of about 90 minutes. But the messages were similar. “Now is the time to be proud and loud Jews,” said Brandon Minde.

A “Rally Against Hate” will be held Thursday, Jan. 9, at 5 p.m. at the Gottesman RTW Academy, 146 Dover Chester Road, Randolph, sponsored by the Morris County Board of Chosen Freeholders. It is open to all Morris County residents.

A “Unity Vigil” will be held Sunday, Jan. 12, at 7 p.m. at Adath Shalom,
841 Mountain Way, Morris Plains, sponsored by the Sisterhood of Salaam Shalom.