Michael Kaufman autographs one of his books about the adventures of “Fox & Camel” at a publishing launch party last September. Photo courtesy Michael Kaufman

As a young child growing up in Hungary, Michael “Mickey” Kaufman loved his collection of American stamps. But he was forced to leave them behind after the 1956 Hungarian Revolution when he was 8 and his family fled the country and immigrated to the United States.

“As a child I owned literally nothing except those stamps,” said the East Brunswick resident.

Years later, to help make up for the loss, Kaufman’s younger sister gave him a pair of cufflinks engraved with images of American stamps. That experience became the basis of “The Stamp Collection,” one of seven books in Kaufman’s “Fox & Camel” series, each about the adventures of the eponymous protagonists — along with a life lesson for young kids. (The books are on sale at foxncamel.com and amazon.com.)

In this particular book, Kaufman told NJJN, Camel is sad because he has to leave his stamp collection behind in Arabia. His little sister and Fox come up with a solution to make him feel better because, as it says on the website, “Fox and Camel like to share, and that is what makes them such good friends.”

Kaufman said he wrote the books for his two grandsons and two granddaughters, but he originally made up the stories featuring the two animal pals to amuse the youngest of his three children, Andrea, on family vacations and outings. He assumed that as Andrea got older — she’s 23 now — she would lose interest, but instead she kept on requesting more stories well into her teens.

“I would go to the library in the morning to get ideas and then make up something — sometimes based on my experiences — memorize it, then tell her the story when we went on a trip,” said Kaufman.

Eventually, Andrea suggested that her father write a book of those stories she so loved as a child, but his job as a corporate attorney for Johnson & Johnson left little time for such pursuits. Finally, after retiring in 2016, Kaufman took Andrea up on her suggestion. 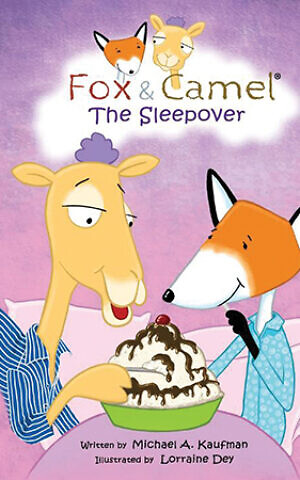 “Originally I thought I’d write about 20 books, but that turned out to be a bit ambitious,” said Kaufman, so he finally settled on the seven he’s written with illustrator Lorraine Dey, an artist and children’s book author who operates from her studio in Toms River. To maintain control of the publishing process, he decided that rather than send his work to established publishers, the books would be produced by BookBaby, a self-publishing operation that Dey engaged.

Although the books, written for children ages 3-7, don’t include specific Jewish content, they convey moral themes, Kaufman said, that spring from his Jewish values. The books “all have something to say about growing up that children need to learn — like how to get along with people, share, have patience,” said Kaufman. “These are things they need to learn to have a happy life.”

Kaufman has a roster of service to the community. He has served as president of the Solomon Schechter Day School of Raritan Valley in East Brunswick (which closed in 2013) and the East Brunswick Public Library Foundation, and is immediate past president of the Oscar and Ella Wilf Campus for Senior Living in Somerset, a Jewish complex of residences and services, where he is now chair of the nominating committee.

Educators at East Brunswick Jewish Center, where Kaufman is also a past president, read the series, which had been issued in a “very limited” hardcover edition. They liked the stories so much that he was invited to read two of the books to children being entertained in the synagogue while their parents were in Rosh Hashanah services last year. 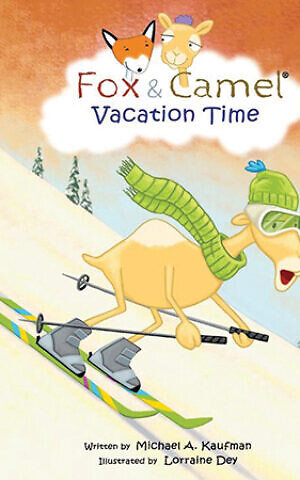 One of the books, “The Ice Cream Cone,” is loosely based on an incident that occurred when the author was 6 or 7. He and his cousin went to get ice cream; when she finished her cone first, she asked for some of his, and he obligingly gave her half.

“The younger kids especially love ‘The Ice Cream Cone,’” Kaufman said. He had the story translated into Hungarian and sent the book to that cousin, still in Hungary. “She didn’t even remember the incident,” he said.

In “The Track Meet,” Fox and Camel devise a plan to help Camel win a track race; in the process, they learn that honesty is the best policy. The book is based on the experiences of his son, Alex, now 38, who was on the track teams at East Brunswick High School and the University of Pennsylvania.

“My two grandsons really love that book about their father,” said Kaufman.

Kaufman and his wife, Sherryl, who is former president of the Southern New Jersey region of Hadassah, also have another daughter, Amanda, 37.

“It’s a funny thing to write a book and another whole production to get it published,” said Kaufman. “But writing children’s fiction is a nice change from lawyering.”