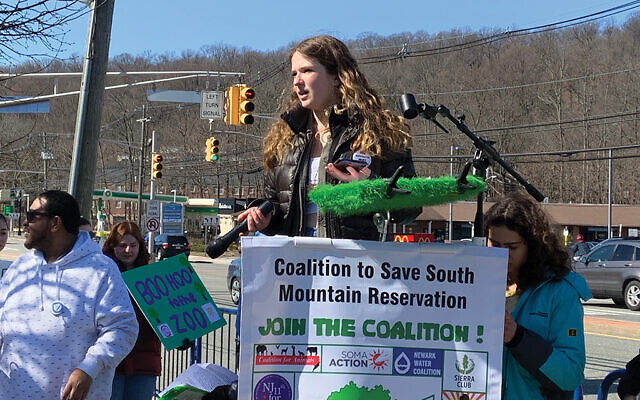 Zoe Newman, 17, loves drama and dancing and she’s been consumed by rehearsals for Columbia High School’s upcoming production of “Matilda.” She smiles easily and plays with her long brown hair when she speaks. But when it comes to social action, Zoe, a member of Temple Sharey Tefilo-Israel in South Orange, is anything but a typical teen.

“With the coalition I’m doing what I believe in,” Zoe told NJJN during an interview near the reservation. Zoe is head of her high school’s Students for Justice Club.

“I’ve always wanted to help people and care for the environment, which [is] integral to Judaism,” she said. And she’s not all talk, no action; her bat mitzvah project was making blankets for children with cancer. She also appreciates the “challenge” of being a student activist while “managing school, what I am doing with the coalition, being part of our school play, and planning for college.”

The hot button issue is Essex County’s authorization of $8.6 million to build a 500-seat outdoor amphitheater for educational programs at the Turtle Back Zoo on what is now open land. On March 13, the county’s Board of Chosen Freeholders is expected to put the project out for public bid.

“With this project, the reservation will lose about one-and-a-half acres of trees,” Zoe said. “It does nothing for conservation. All this building on land like this is what brings about climate change.”

The Turtle Back Zoo, which first opened in 1963, has undergone extensive renovations and updates and is a popular regional destination, attracting some one million visitors annually who are drawn to the Treetop Adventure Course, miniature golf, playground, hiking trails, and more.

Zoe said her family, residents of Maplewood, have been enjoying the reservation for years. They bring their dog to the reservation’s dog park and hike the miles of trails. Zoe is the daughter of Brad and Jackie Newman.

The amphitheater was included several years ago in a master plan for the area. Newman and her friends first became aware of the project during a heated discussion in school about climate change.

The conversation prompted them to attend a town hall meeting in Maplewood, where they learned more about the proposed zoo expansion from Joyce Rudin, the Coalition chairwoman. Working with Rudin they organized a March 1 rally and  Zoe was one of the featured speakers. “We had a lot of different groups of residents and students, about 350 in all,” she said, adding that more student-led rallies are in the works.

She said the $8.6 million allocated toward building the amphitheater can be put to better use. “Look at the water crisis in Newark,” she said. “Just think if those millions were used to help those people in Newark, many of them children, instead of taking more land for an amphitheater we feel is not needed. This money needs to be used to help the environment, not take away from it.”

In the meantime, the Coalition is working on getting protected status for South Mountain Reservation. “Our goal is to first stop the expansion, then try to get legislation that would make the reservation protected land and not just a county park,” she said.

Zoe encourages residents to speak up to their legislators and the governor. “I am learning, as citizens, we must stand up for what we believe in.”

She plans to study social justice and political science in college — Occidental College in Los Angeles and Bard College in Annandale-On-Hudson, N.Y., are among her early favorites, both of which have programs on the environment and climate change.

“This reservation is a beautiful natural resource that really needs to be protected,” Zoe said. “And climate change is a such a big issue that is affecting us already…. destroying more of a natural resource is just unnecessary.”