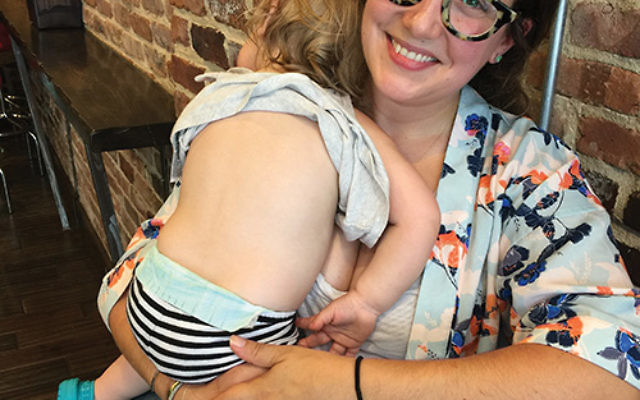 Shannon Sarna, 35, of South Orange has baked new life into old standards, and she’s got me believing in the power of resurrection when it comes to Jewish carbohydrates.

If you swoon over the buttery cream cheese dough of rugelach; if your babka lives or dies on the quality of its cinnamon; if you think prune, apricot, and raspberry are unfaithful to hamantaschen’s first spouse, the poppy seed, you may not like the newfangled delicacies wrought by Sarna from your bubbe’s traditional holiday treats. Harissa and goat cheese rugelach, pull-apart challah with spinach-artichoke dip, and brie and herb hamantaschen are now on the menu, with her new cookbook, “Modern Jewish Baker: Challah, Babka, Bagels & More,” to be released in September by The Countryman Press.

Of course, no one will force you to make S’mores Babka. But don’t you want to try it, along with her Balsamic Apple Date Challah, for Rosh HaShanah?

The goal of the book is not only to break out of conventional baking boxes, but to give users the tools to create what they like. “I wanted the home baker to be able to master the basic recipes,” Sarna told NJJN at Coffee Mill Roasters in Millburn, where we were joined by her 18-month-old daughter, Billie. Sarna’s family — including husband Jonathan Goldberg and daughter Ella, who is about to start kindergarten at Golda Och Academy in West Orange — belongs to Congregation Beth El in South Orange.

As Billie munched on the mac and cheese her mother had whipped up at home using sweet potatoes, yogurt, and cheese, Sarna added, “It’s a ‘Bake Your Own Adventure’ guide, where you take this filling and you take this topping — or maybe you don’t.” There’s nothing Sarna loves more, she said, than people sending her their own riffs on her recipes, once they’ve gotten the hang of the basics. “That’s what I want,” she said, as she nursed Billie.

That’s why you won’t find one recipe for challah, you will find an entire section. It opens with the basics: what flour to use, how the dough should feel, how to let it rise, and different ways to braid the loaves. These are the tricks and techniques she developed by trial and error over the decades since she started baking the traditional Shabbat loaves in high school.

Once you’ve got the hang of it, Sarna wants you to have some fun with stuffings and toppings, both sweet and savory — not just hers but whatever you can think of or happen to have in your pantry or fridge.

The book follows the same pattern for babka, rugelach, hamantaschen, bagels, pita, and even matzah. Thought matzah was supposed to taste like Styrofoam? Not if it’s Sarna’s homemade truffle oil matzah. Or how about turmeric matzah? You might even consider eating matzah year-round, which her mother did — minus the turmeric and the home-made part. Yes, her mother apparently did like the taste of Styrofoam.

With “Modern Jewish Baker,” Sarna has taken what she’s been doing the last seven years as editor of the food blog, “The Nosher,” which appears on 70 Faces Media, and elevated it to more than just a recipe du jour.

She has thought of everything, including serving suggestions, and with plenty of recipes to boot. Sloppy Joe on an onion challah roll, anyone?

Her work places her squarely within the new Jewish food movement, infusing Old World traditional foods with new flavors and techniques, and providing a millennial take on some culinary taboos and timeless questions like: What makes food Jewish?

“I believe that not all kosher food is Jewish, and not all Jewish food is kosher,” she said, asking, “Is kosher sushi Jewish? And if Zak The Baker [a kosher café and deli in Miami] makes a kosher sourdough, is it Jewish?” She then turned it around, pointing to new Jewish delis that are often not kosher and yet decidedly Jewish.

The new Jewish food movement has a “back to the land” ethos that began as a marriage of kashrut with sustainable farming and food justice. Its early voice was the Jewish environmental organization Hazon, which first articulated its vision through the blog “The Jew and the Carrot,” launched in November 2006. More recently, Summit native Jeff Yoskowitz launched in 2012 the Gefilteria — purveyor of a new iteration of that traditional chopped fish loaf — and coauthored, with business partner Liz Alpern, “The Gefilte Manifesto,” a 2016 cookbook reclaiming Ashkenazi slow foods. (Yoskowitz is also a graduate of Solomon Schechter Day School of Essex and Union — now Golda Och Academy — in West Orange.) Of course, the new Jewish food movement mirrored contemporaneous secular movements fueled by books like Michael Pollan’s “The Omnivore’s Dilemma” and the rising popularity of Community Supported Agriculture co-ops.

For Sarna, a millennial with a mashed-up background (Italian-Catholic mother, Jewish father), it’s all about embracing Jewish food as a portal into Jewish culture, but “without the muscle memory to know what hamantaschen are supposed to taste like.” That freed her up to play.

It makes sense that the book opens with challah, that most iconic of Jewish foods, both ritual and cultural. Challah is where her own journey into Jewish cuisine began, while she was still in high school, after her mother died from non-Hodgkin’s lymphoma. “Grief does funny things to people,” she said. She had learned to bake banana bread with her mother, and she was trying to figure out her own connection to Judaism. “I thought, ‘Oh, I’m going to bake challah.’ It came out of nowhere.”

She started baking with her siblings on Thursday nights, and she kept going until she got it right.

And then she just moved on to other Jewish specialties, giving them her own twist.

Meanwhile, she graduated from Smith College, eventually found her way into the Jewish not-for-profit world, and then started a food blog “as a writing exercise,” she said. It got noticed. My Jewish Learning brought her on to start “The Nosher” seven years ago, and she’s been working on it ever since. She is also food guru and spokesperson for Every Bite Counts: Hadassah’s Nutrition Program, and her work has been featured in Edible Brooklyn, Parade, Tablet, and BuzzFeed.

Even if it’s all meant to be fun, Sarna, with Billie fast asleep in her arms, took a moment to strike a serious note. “There are a lot of children of interfaith families like me,” she said, who don’t have those Jewish food associations. “But barbecue babka speaks to a millennial food sense and could be a point of connection.”

Of course, you don’t have to be a millennial to appreciate her cookbook. But perhaps someone could explain the recipes for leftovers — because seriously, if you make a double layer caramel and chocolate babka, do you really think there will be enough left over to make babka French toast?

For the dough: In a small bowl, place the yeast, ½ tsp. sugar, and lukewarm water. Stir gently to mix. Allow to sit five to 10 minutes, until it becomes foamy on top.

In a large bowl or stand mixer fitted with the whisk attachment, mix together 1 ½ cups of the flour, salt, and ½ cup plus 2 Tbsp. sugar. Add the water-yeast mixture, oil, dried rosemary, and minced garlic to flour. Mix thoroughly.

Add another cup of the flour and 2 eggs and mix until smooth. Switch to the dough hook attachment if you are using a stand mixer.

Add another 1 ½ to 2 cups of flour, mix thoroughly, then remove from the bowl and place on a floured surface. Knead the remaining ½ cup flour into dough, continuing to knead for about five minutes.

Place dough in a greased bowl and cover with a damp towel. Allow to rise at least three hours.

Divide the dough in two and braid the challahs into desired shape.

Place braided challah on a baking sheet lined with parchment paper or silicone baking mat. Allow the challah to rise another 45 to 60 minutes, or until you can see the size has grown and the challah seems light. This step is very important to ensure a light and fluffy challah. Preheat oven to 375 F while the dough rises.

For the topping: In a small bowl beat 2 egg yolks with 1 tsp. water. Brush the egg wash liberally over the challah. Sprinkle with the additional dried rosemary, minced garlic flakes, and coarse sea salt. If using whole, fresh rosemary sprigs, run them under cold water briefly and pat dry gently. For a particularly artful presentation, place the whole rosemary sprigs on top of the glazed challah.