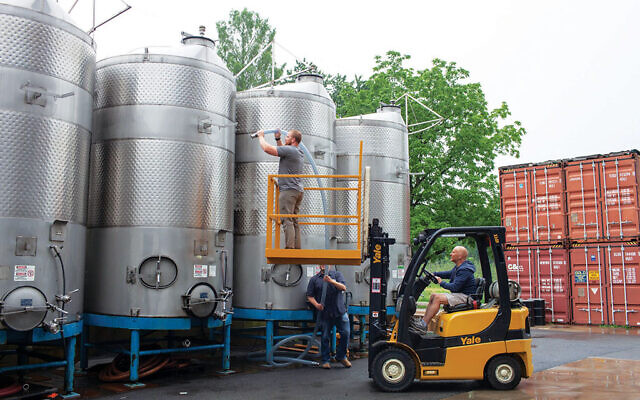 Chances are that even if you haven’t heard of Charles Rosen, you’re familiar with some of the products and projects he’s been involved with. More than likely you’ve had a sip (or more) of Mike’s Hard Lemonade, bought a pint of Ben and Jerry’s ice cream, or been to an event in Madison Square Garden, all former advertising clients.

The 52-year-old Montclair resident — listed by the Newark Star-Ledger as one of the state’s 20 people to watch in 2020 — has an extensive resume, which includes a career in law and an unsuccessful run for Congress. But his newest endeavor is producing hard cider, with a dash of tikkun olam, on a farm near the village of Asbury in rural Hunterdon County.

“This is 108 acres of my wanting to help people and bring people together, along with healing this land,” said Rosen, a member of Rabbi Elliott Tepperman’s Wednesday afternoon meditation group at Bnai Keshet in Montclair. “I have produced movies, spent 14 years in advertising, created a successful advertising firm — Amalgamated — and had a taste of politics. Now I want to be a big part of helping people.” Rosen credits Tepperman with helping to make his Judaism “more fulfilling.”

In 2012, Rosen started another business, first in Newark, to produce hard cider out of Harrison apples native to the area. At the same time the business would assist ex-convicts in getting their lives together and immigrants in establishing themselves, by giving them work and paying a decent wage. Rosen named the business New Ark Farms.

“I was told about cider made with a famous apple that grew around Harrison,” said Rosen. “George Washington enjoyed it all through his military and political career. That pointed me toward a direction, but I came to learn that to produce a hard cider in New Jersey, you have to have a cider winery license and produce the cider where you have the orchard.”

There were other requirements that made it difficult to run the business, so he decided to move their primary operation out of Newark. In the winter of 2015 Rosen purchased a piece of snow-covered land in Hunterdon County just south of Interstate 78, which was once home to the Kings Road Winery. He renamed it Ironbound Farm, the eventual home of Ironbound Hard Cider.

“There was a winery here and the owner was an incredibly wealthy guy,” said Rosen. “He invented the nozzle on the aerosol can and later got in a fight with his winemaker, who poisoned all of the grapes with Roundup [the weed-killer]. That left the land, which had laid fallow for a few years, in very bad shape.”

Along with a dozen workers, Rosen began rehabilitating the land with the goal of producing hard cider using Harrison apples. “A Jewish guy from Montclair, with 12 ex-cons from Newark working on this land in Hunterdon County? People didn’t know what was going on,” he said with a chuckle.

Rosen pays each of his employees at least $15 an hour and provides full health-care benefits, no matter their background. “I want them all to have a chance to better themselves,” he said. “A living wage and health care are steps toward that.”

After researching Harrison apples, Rosen found a man named Tom Buford who had preserved Harrison apple stock in his North Garden, Va., orchards. Buford offered Rosen 100 trees. “It was the best thing that could have happened for us,” said Rosen. 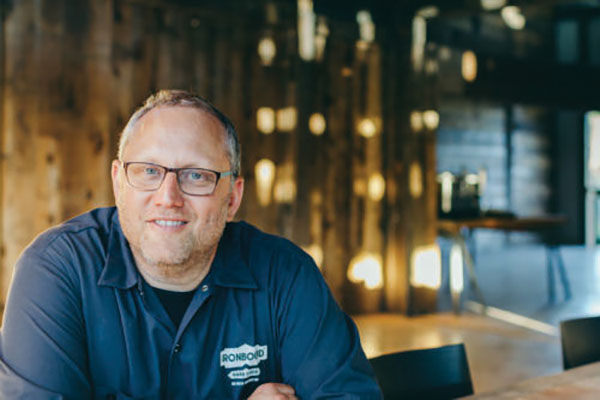 One of Charles Rosen’s goals with the Ironbound Farm, in addition to making cider, is to help workers in difficult circumstances. Photo by Stephen Johnson

It took a few plantings until the soil, which Rosen said is “amazing,” achieved the natural balance for his apple trees to thrive. He and his staff also created an agricultural balance, adding livestock essential to integrated farming (a system in which the farming components support each other), from pest management (via chickens, turkeys, geese) to invasive weed eradication (courtesy of sheep, cattle) to waste management (pigs) to pollination (bees) to help his apples and other fruits and vegetables grow without chemicals.

“Transforming the land allowed us to come up with this concept for fully integrated agriculture that nobody has ever done on the east.”

Rosen and Ironbound Farm received $788,000 from the New Jersey Highlands Council in January 2019 in support of not converting the land to housing or other non-agricultural use.

“This is a model of proving to commercial orchards that we can remain fully regenerative, [certified] organic, and be a high-density commercially viable orchard,” said Rosen. “We’re experimenting with a lot of different kinds of agriculture that, unfortunately, most farmers don’t have the luxury of doing because they’re tied to companies that are just growing food for high yield at low costs. My whole model is how to create viability along the entire food system for farmers.

“The average farmer in New Jersey, or in our country, only makes 14 cents on every food dollar,” he said. “The farmers can’t survive on that. What I’m trying to do is try different models as a proof of concept to show that farmers actually can be viable.”

His end result is locally made ciders named Ironbound Original, Pinelands Rosé, and Highlands Farmhouse. There are other special ciders with infusions that include ginger and various berries that are served on weekends in the farm’s tasting room. All ciders are gluten-free and have no added sugar.

Rosen said that 100 percent of the apples Ironbound Farm buys to supplement what he grows locally for its cider production are made from fresh-pressed fruit from partner growers in New Jersey, New York, and Pennsylvania, as opposed to foreign ones. Doing so puts money back into the region, an example of his efforts toward tikkun olam, a concept he learned as a child in Kingston, Ontario.

“There was one main synagogue in Kingston, and it was an Orthodox synagogue where everyone could participate,” said Rosen. “My father was from there and he married my mom when she was 18. She was from the Bronx first, then Scarsdale. She always jokes that where she grew up everybody was Jewish, and if they weren’t, they certainly wanted to be.

“In this small town in Canada, my parents created a powerful platform for me, as they were tremendous philanthropists and went beyond just philanthropy,” he said. “They were what my mom referred to as being a ‘communitarian,’ and [his mother] was a huge Canadian activist both within the Jewish community and the general population throughout Canada…. so I always had this influence of helping people.”