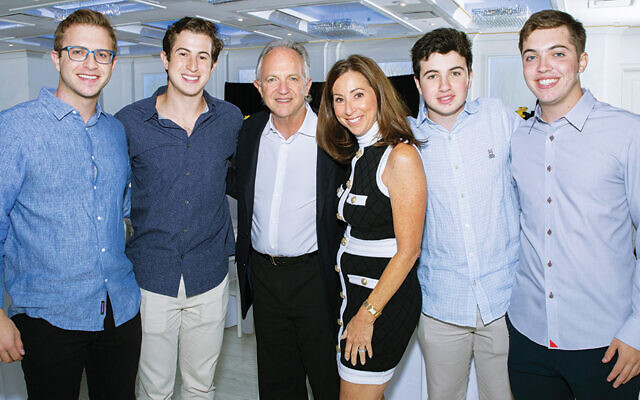 Deborah and Wayne Zuckerman and their sons, Andrew, David, Michael, and Jacob, of Livingston will be honored by Manhattan’s Museum of Jewish Heritage — A Living Memorial to the Holocaust at its annual Generation to Generation benefit. The in-person dinner is at the museum on November 30, at 6 p.m., and it will be streamed online as well.

Lawrence O’Donnell, host of MSNBC’s “The Last Word,” will present the Zuckerman family with the Rosa Strygler Lifetime Achievement award. Dr. Ruth Westheimer and Marion Wiesel have been honored with that award as well.

Evelyn and Harry Goldfeier of Closter, Ruth and Steven Katz of Short Hills, Rita G. Lerner and Cliff Salm of Englewood Cliffs, Ann Oster and Marilyn Rosen, both of Englewood, Ann and Bernard Sklar of Livingston, and Elyse and Howard Butnick of New York are the evening’s cochairs.

Wayne is a partner of Sterling Properties; he graduated from Boston University and is on the board of the school’s Hillel, as well as the Auschwitz Jewish Center Foundation board. Deborah graduated from Georgetown University, is a board member of Daughters of Israel, and is on the Women’s Philanthropy board at the Jewish Federation of Greater MetroWest.

Both Deborah and Wayne are board members of the Joseph Kushner Hebrew Academy/Rae Kushner Yeshiva High School and are active members of the U.S. Holocaust Memorial Museum and of Congregation Etz Chaim. They have been active supporters of the Museum of Jewish Heritage for more than 30 years and have been involved with the Generation to Generation dinner since its inception.

Generation to Generation is made possible by its presenting sponsors, Deborah and Wayne Zuckerman and their children; and by founding sponsors Gladys Halpern, Sharon and David Halpern, Cheryl and Fred Halpern, MorAnn and Jack Halpern, Batsheva and Murray Halpern and families, Ruth and Steven Katz of Short Hills, and Ann and Bernard Sklar and their families, mostly from Livingston.

The annual L’dor V’dor, Generation to Generation dinner has brought together survivors and their families and friends to commemorate those who were lost and to look toward a future of hope and renewal. The benefit supports the museum’s mission to fight bigotry and anti-Semitism through lessons of the Holocaust.

For more information, go to mjhnyc.org/gentogen.