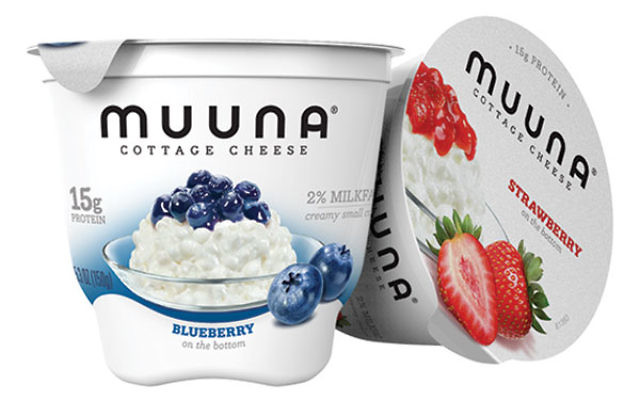 Muuna adds fruit to some varieties of cottage cheese to appeal to the American palate.

About a year ago, a recruiter contacted Gerard Meyer of Princeton to explore his interest in developing a U.S. brand for Tnuva, the largest Israeli food company. Meyer already had experience with Israeli companies — he built the U.S. business of SodaStream, which sells seltzer makers and has an annual revenue of $200 million.

The 90-year-old Tnuva still had much of its yearly $2 billion revenue coming from Israel, and, Meyer said, “they decided they wanted to spread their wings to grow.”

Together, Tnuva and Meyer determined that cottage cheese, which they saw as a neglected category in the U.S. dairy market, should be their focus.

In August 2016 Meyer launched the Tnuva subsidiary, Muuna, to sell Israeli-style, creamy cottage cheese in the United States. Headquartered in Princeton with 10 employees, Muuna’s cottage cheese is made in Minnesota.

Compared to the yogurt market, he said, cottage cheese comes up short. Whereas yogurt has several distinctive brands — such as Dannon, Chobani, and Fage — cottage cheese has less recognizable brands like Breakstone, which is under Kraft Foods and also includes butter and sour cream. Breakstone’s packaging, Meyer added, looks the same as it did 40 years ago.

Also, in the yogurt market, convenience reigns, with single-serve containers and “fruits of all shapes, sizes, and forms. Plain, big tubs are less than 1/10 of the category,” he said.

Meyer, a Harvard Business School graduate, thinks he can turn around the cottage cheese market in the United States. “I think I know why it has declined and how it can increase and improve and do well,” he said.

With this in mind, Meyer and Tnuva started to reimagine and rebuild the cottage cheese category. First, it created the Muuna name for its new product, which, Meyer said in an e-mail, “evokes dairy (‘moo’) and evokes delicious (‘mmm’).”

Then it hired Chobani’s designer to create an attractive package. “We made a unique shape and a nice look,” Meyer said. “People buy things with their eyes first.”

Meyer’s mother is French and his father was German, and his parents’ families escaped from Europe in the late 1930s, ending up in Argentina, where he was born. The Meyers moved to Plainfield when he was two, and he grew up largely in Westfield. He moved to Princeton in 1998 with his wife Sherry, and they are members of The Jewish Center in Princeton.

Although Meyer had visited Israel only once before starting his work for SodaStream, he estimates that he’s been there 50 times in the last dozen years. “It’s nice to be able to get to go to Israel as often as I do, and I get to work with a pretty good cross-section of Israelis; you see it from a different perspective than you would as a tourist,” he said. One thing that has impressed him about Israelis is their ability to compartmentalize — when they are doing business it is as if the current politics of the Middle East do not exist.

Meyer has now worked on what have been essentially two start-ups in cooperation with companies in Israel. He disagreed with the notion that he is a “real entrepreneur” in Israel, saying that title should be reserved for “someone who has no money, no way to get paid, no backers, and is willing to live on the street.” Starting a business takes resilience and persistence, he said, and “Israelis by their nature, know ‘I’m going to find a way.’”