“This is the day the Lord has made,” Governor Phil Murphy said, quoting from Psalm 118.

The governor was speaking at the Calvary Baptist Church in Paterson, the date was June 18, and the occasion was the signing of the Fair Chance in Housing Act — a law that generally bars landlords from asking potential renters about their criminal history on housing applications. Advocates of the measure successfully argued that letting landlords refuse to rent to people with criminal convictions makes it exceedingly difficult for ex-prisoners to reenter society, leading to homelessness and recidivism.

“I thank the sponsors and advocates for their tireless commitment to making this bill a reality and ensuring that New Jersey is a fairer place to live,” Mr. Murphy said.

He then acknowledged four advocacy groups: The New Jersey chapter of the NAACP, the Latino Action Network, the Fair Share Housing Center, and the Religious Action Center of Reform Judaism, New Jersey.

And as Mr. Murphy went through a box of pens for the ceremonial signing, he made sure to give one to Sarah Blaine, RAC-NJ’s lead organizer.

The signing of the bill marked the success of RAC-NJ’s first lobbying effort — not a bad result for an organization that is barely a year old.

“It’s a wonderful way to start off. It’s great for the endorphins and the morale,” Jessica Schachter of Montclair, a member of the RAC core team, said.

RAC-NJ is the eighth, and newest, state-based branch of the Washington D.C.-based Religious Action Center of Reform Judaism, which has been the hub of Reform Judaism’s social action work for more than 60 years. Most famously, its conference room was the site where civil rights leaders drafted the 1964 Civil Rights Act and the 1965 Voting Rights Act.

RAC-NJ is an evolution of the Reform Jewish Voice of New Jersey, an all-volunteer advocacy group that traces its origin to a call from State Senator Loretta Weinberg of Teaneck. “I need you to show up in Trenton,” she told a group of New Jersey Reform Jews at the 2006 Biennial of the Union of Reform Judaism.

With RAC-NJ, however, local advocates have the support of a professional organizer. Ms. Blaine, who lives in Montclair, is an employee of the RAC main office in Washington; her position is funded in part by the Texas-based Michael and Alice Kuhn Foundation, as well as by local contributions. (Teaneck’s Temple Emeth, for example, raised money for RAC-NJ as part of its 2019 High Holiday appeal.) 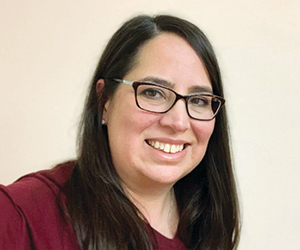 Ms. Blaine came on board in February 2020. She grew up in Milburn and Short Hills. Her family were members of Temple B’nai Abraham in Livingston; in high school, as she got involved in the Reform NFTY youth group, she went to Temple Sharey-Tefilo in South Orange. She taught high school and then worked as a lawyer for seven years. She was back at school studying for a masters in history, with the thought of returning to teaching as a high school history teacher, when she saw the listing for the RAC-NJ position. “It was everything I cared about,” she said.

RAC-NJ started up formally last August. “We launched with two mandates,” Ms. Blaine said. “To do nonpartisan civic engagement as part of the Reform movement’s 2020 civic engagement campaign, and to figure out an issue we wanted to work on to address racial and economic injustice in New Jersey.”

For the civic engagement campaign, Ms. Blaine prepared materials that many of New Jersey’s 45 Reform congregations used. Given the unique conditions of the 2020 elections, “we spent a lot of time teaching people how to vote and what all the rules were around voting,” she said.

That included explaining the intricacies of the New Jersey mail ballot, for which the presentation she prepared provided a Jewish analogy: The ballot, which was wrapped in an inner envelope and an outer envelope, was like the Torah, the Torah cover, and the ark.

“We presented it at congregations across the state,” she said. “We were training leaders so they could call every member of their congregations. In addition, there was a lot of sending postcards to voters, encouraging them to vote, and outreach to young voters.”

After the election came the question: What to lobby for?

A team of 22 people researched the issues. “We heard about many different campaigns people were working on, and narrowed it down to two finalists, reflective of Reform movement policies,” Ms. Blaine said.

One was a campaign for same-day voter registration, being spearheaded by the New Jersey Institute for Social Justice in Newark.

The other was the campaign for the Fair Chance in Housing Act, led by the Fair Share Housing Center in Cherry Hill.

During Passover, RAC-NJ held two town halls that drew a couple hundred people from congregations across the state to help choose which issue to prioritize. Both ideas were popular and were evenly balanced when it came to a vote; in the end, RAC decided to focus on housing.

Fair Share Housing launched its push for the bill in April, and RAC-NJ was on board. 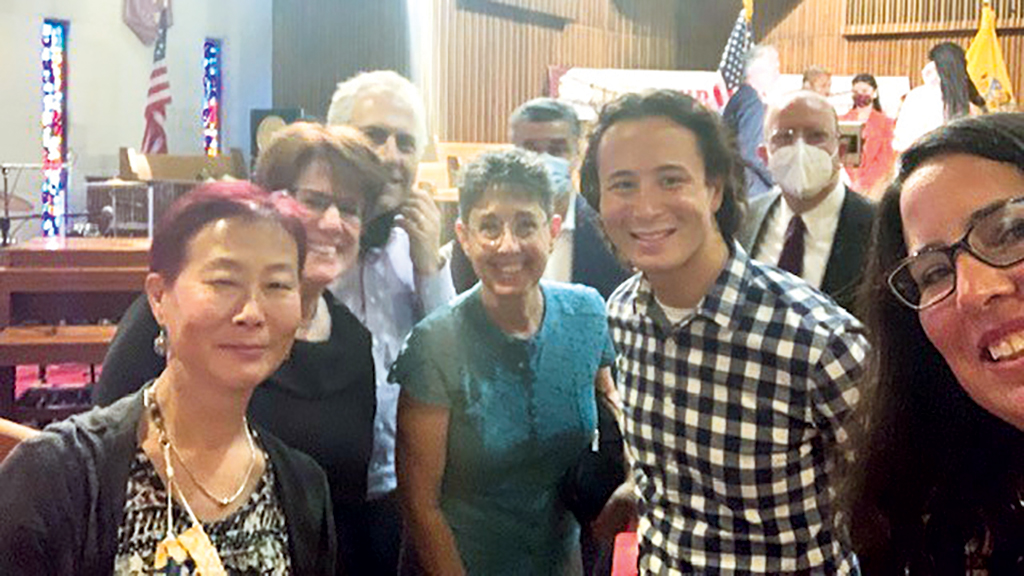 Members of the RAC-NJ team pose at the signing ceremony.

The organization has an active partnership with groups at 26 of the state’s Reform congregations. “A few more are still forming,” Ms. Blaine said.

RAC-NJ educated its members about the issue, and guided them on approaching their legislators in Trenton.

“We heard a lot of stories,” Ms. Blaine said.

Cantor Menaker told of her experience trying to find a place to live with her former husband, who had a felony conviction. “We had somebody in one of our congregations who is a nurse, who told how she would see people cycle in and out of prison because they didn’t have access to housing,” she said.

Her group posed the question: “How do we live the idea of teshuva if we keep holding people’s criminal record against them?”

“As Jews, we believe in repairing the world and we believe in the Fair Chance in Housing Act” was the headline of an op-ed written for NJ.com by three members of the RAC-NJ team: Rabbi Benjamin David of Adath Emanu-El in Mount Laurel, retired state Superior Court judge Peter Buschbaum of Pennington, and Nilene Evans of Washington Township.

Ms. Evans has been chair of the social justice committee at Temple Avodat Shalom in River Edge. Working with the statewide RAC-NJ “has been an amazing experience,” she said. “You have a big voice. Most of our Reform congregations in New Jersey are small. With a couple hundred or three or four hundred members, you can’t have as big an impact as you can with the 15,000 members of the Reform movement in New Jersey. It amplifies our voice and makes us a force to be reckoned with.

“It is rare for a new social justice group to win their first campaign but it is remarkable energizing to do that,” she said.

As it happened, the success of RAC-NJ’s first legislative priority was not unprecedented.

“Four our state projects have had big wins in the last few weeks,” Ms. Blaine said. Besides her New Jersey group, RAC Texas had success in fighting voter suppression in the legislature; RAC New York worked on the “less is more” campaign to eliminate the practice of incarcerating people for technical parole violations, and RAC Illinois scored a win on an immigration-related issue.

“When we do this justice work, we really bring added value to a coalition,” Ms. Blaine said. “We have this reach in largely suburban districts that a lot of the more traditional advocates don’t always have the same access to. That’s been the experience in many states. Working together and pushing our community to work for justice means we can really help, because a lot of those justice-related fights are fought in the suburbs.”

With its first lobbying campaign a success, RAC NJ will pivot back to civic engagement until the November state elections.

It is planning candidate forums and creating election toolkits. It has posed a challenge to its congregations to double their impact.

“In the last gubernatorial elections in 2017, statewide voting turnout was 39 percent,” Ms. Blaine said. “We’re challenging our congregations to ensure that at least 78 percent of their eligible voters vote this November,” Ms. Blaine said. She said the group also will try to find people willing and able to serve as poll workers. This year, for the first time, New Jersey will have early voting, and so the need for poll workers will expand.

“I run into a lot of Jews who do different kinds of work on justice and politics. What’s really inspiring for me is to do it as Jews together, and let our values be the key to driving this work.”