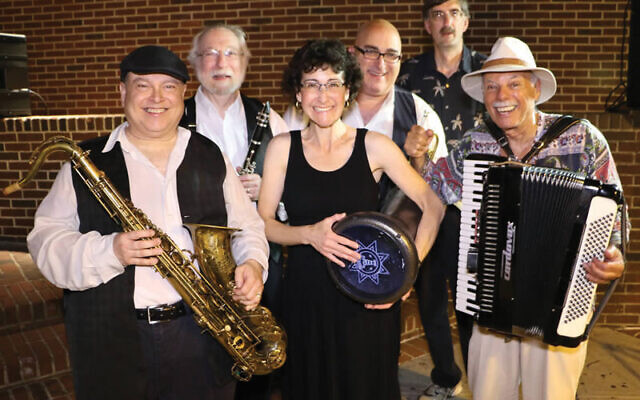 Ed Goldberg remembers the humble beginnings of the Odessa Klezmer Band in 1984 in New Brunswick.

“It was just a bunch of local guys playing local gigs,” Goldberg told NJJN at his home in Columbus, located in Burlington County. “As time went by, most of the band members found different situations and I became the leader. Since then, 35 years ago, I’ve never looked back.”

Goldberg’s group, which has produced four recordings that have either been nominated for or won Grammy Awards, will perform in a Chanukah celebration at B’nai Shalom in West Orange on Dec. 25.

The band plays a variety of musical genres. “We do polkas, Russian music, many European themes, and even Ladino,” Goldberg said. “We perform all over the United States and were invited to play all over Israel a few years ago. They wanted to see how an American group played klezmer.”

While klezmer is closely tied to the Jewish Eastern Europe of the past, countries with Jewish populations such as Turkey, Romania, Bulgaria, and Germany — and the Lower East Side of New York City — contribute slightly different rhythms and sounds to the music. “We delve into all klezmer and want the audiences to really enjoy the mixture of what we present,” said Goldberg, who grew up in the Elmora neighborhood of Elizabeth.

An electrical engineer by trade, Goldberg leads his band with a MIDI accordion that can produce synthesized or digitally sampled sounds of several instruments, which can then accompany any instrument in the band; it almost makes the accordion sound like a one-person band.

“The only problem I have with the accordion is if one of the key elements breaks or fails, there are less and less people who seem to be available to fix the type of instrument I have,” he said.

Goldberg and his band have made over 160 recordings of klezmer, Israeli, Polish, Ukrainian, and country music. His key musicians also hail from the Garden State.

“We put a lot of energy into our performances,” said vocalist Miriam Libove of West Orange. “Ed is a remarkable musician and a lot of fun to work with.”

In addition to Libove and Ed’s wife Ellen Goldberg, who plays percussion, members of the Odessa Klezmer Band include Steve Kaplan of Ewing on saxophone, Bob Mehlman of Princeton on the clarinet, Dennis Ionata of Columbus on trumpet, and Joel Pecchioli of Toms River on drums.

“That’s my full core band,” said Goldberg. “During this time of the year, with all the holidays, I often have to substitute with other musicians that I know. I’ll be in West Orange, but we might have some different names — all of which are excellent — at that appearance.”

Goldberg broke into music playing piano with the Jimmy Sturr band, a noted polka group that began in Warwick, N.Y., and eventually toured the world and won 18 Grammy Awards. While in the band he learned to play bass.

“I love the accordion, but my first musical love is the piano,” he said. His parents started him on lessons when he was 10, and he picked up the accordion in high school with the marching band as a “way to get into the [football games] free.”

Goldberg said Walt Lesniak, a member of the Jimmy Sturr band, recognized some of the klezmer tunes he was playing on both the piano and bass during side sessions and encouraged his interest in the genre. “Walt gave me the confidence I could make it playing klezmer.”

Before going into music full time, Goldberg oversaw the New Brunswick school system’s computer operations for many years. He was also an adjunct computer professor at TCNJ and in Burlington and Middlesex Community Colleges.

“All the time I was doing that, the Odessa Klezmer Band was becoming more and more popular,” he said. “I was still working as an adjunct professor and doing gigs. Four years ago, I decided Odessa would be my full-time job. It’s worked out well.”

Goldberg credits “Fiddler on the Roof” with bringing klezmer into vogue with many who had no idea what it was. “Everybody knows ‘Sunrise Sunset’ today,” he said. “Over the last 20 years, we can see how it all developed through the demand for our band. We couldn’t be happier.”

The Odessa Klezmer Band’s album, “Who Stole the Kishka,” received a 2009 second-place award for Best Klezmer Album by Just Plain Folks, a community of over 50,000 songwriters, recording artists, and music industry professionals.

Goldberg has performed in venues such as Carnegie Hall, and at prestigious events such as the Kutztown Folk Festival. “There are several days we have two gigs,” said Goldberg. “Not all are klezmer.”

At a recent gathering in South Orange, Goldberg said many of the clients sang along. Then “a whole group began doing line dancing.”