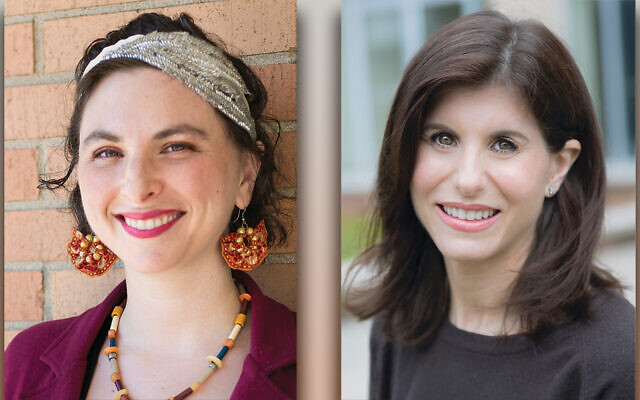 In asking her how it felt to be part of an all-female clergy team, I was indeed assuming that there is a default position: male clergy. Would I be asking that kind of question to a male cantor, hired to work with a male rabbi?

“We have to ask ourselves where the question is coming from,” she said.

Cantor Kissner, who grew up in South Orange, graduated from the Jewish Theological Seminary’s cantorial school in 2021 and knew from the start where she wanted to work. In 2019, “very pregnant” with her second child but also seeking a job, “I saw a listing for a student cantor at Oheb Shalom,” she said. With her parents living in South Orange — and therefore able to provide “built-in babysitting and food” for the weekend — she seized the opportunity.

“I thought it would be supercool,” she said. While she had attended Congregation Beth-El as a child — it was “the other Conservative shul” in town, she said — she had visited Oheb Shalom Congregation often, singing in a children’s choir, tutoring youngsters in Torah trope, and “being groomed at a young age by Cantor Lippitz,” the longtime chazzan of the congregation.

Indeed, she pointed out, Cantor Lippitz was recruited immediately by the synagogue upon her 1987 graduation from the Jewish Theological Seminary as one of the first two female cantors in the United States.

As the cantorial intern morphs into the shul’s cantor on July 1, she comes not only with her husband, Noah Ginsburg, and their two children, daughter Ma’ayan, 3 l/2, and son Raz, 1, but with a commitment to “create a musical culture emphasizing creativity and the arts; that honors the traditional liturgy of Oheb Shalom but is not afraid to innovate and try things that seem radical and wild.

“The congregation honors tradition,” she said, but with the clergy change and the pandemic experience, “they’re up for anything. There’s an openness,” which paves the way for new things, such as outdoor Jewish rituals.

“I really love working with people of all ages,” she said. “I feel strongly about the empowerment of elders,” and she mentioned a book “From Age-ing to Sage-ing” by Zalman Schachter-Shalomi, that discusses this issue. But she also is looking forward to working with b’nai mitzvah and participating in adult education. “My desire is to integrate people at different points of their lives with this Jewish community,” she said.

In addition, she said, she brings to her position “an appreciation for different types of Jewish music” and will incorporate many styles into her services. Acknowledging that congregants have different preferences in terms of their musical aesthetic, she said her goal is to “integrate and balance.”

The synagogue itself is a model of diversity, she said, “affirming and embracing different types of Jews,” whether interfaith, queer, or Jews of color. “We affirm and embrace where they are.

“I’m really excited about working with Rabbi Treu,” she said. “I’ve admired her for a long time. There’s an atmosphere of collaboration and love in the clergy team.” Being part of an all-female team offers both challenges and benefits, she added, calling it exciting to be part of something that would not have been possible 30 years ago.

“When Cantor Lippitz arrived, she was one of first two women to be invested as a cantor at JTS,” Cantor Kissner said. “It was a huge thing. In one generation, there’s a hugely different picture.”

One challenge lies in the fact that “you want people to feel they can come to you and feel closer to you and to have models of leadership. For Jews of color, nonbinary Jews, men, to not have someone physically represent them is a challenge. You need to make sure they feel seen and affirmed.

“It’s an exciting time to be a cantor,” she continued. “For a while I tried to make it as a performer, doing auditions and shows, but not enjoying it. I realized over the years that all of the things a cantor does, I love doing. It combines all of those things under one title. There’s been an evolution in the role; it’s more of a clergy, a holistic role. There’s an opportunity to do more exciting and innovative things.”

On June 30, Oheb Shalom will hold a ceremony at which Rabbi Mark Cantor will pass the Torah to Rabbi Abigail Treu as she begins her spiritual leadership of the congregation. The title of the ceremony, “Dor L’Dor: Celebration of Clergy Transition,” acknowledges the importance of the event, which is being marked with “a ritual of transition.” Rabbi Cooper has been with the congregation since 1998, and soon will become its rabbi emeritus.

Rabbi Treu will become the synagogue’s rabbi on July 1. She is the former director of the Center for Jewish Living and the David H. Sonabend Center for Israel at the Marlene Mayerson Jewish Community Center in Manhattan, and she spent the last year as interim rabbi at Agudas Achim Congregation in Columbus, Ohio, helping to guide it through the pandemic.

Her “pandemic gig” — leading the Ohio congregation mainly over Zoom, since in-person services were shut down — “was one of the weirdest rabbi gigs ever,” she said, adding, however, that it was the situation, not the shul, that was weird. She loved the congregation.

Nevertheless, from this experience, “I learned how badly we are all in need of connection,” even if it be over Zoom or by telephone, she said. And from Zoom, she learned that connection with some of the most vulnerable and isolated members of the community can be maintained, even when they cannot attend services physically. She intends to keep that in mind.

Oheb Shalom describes itself as an egalitarian, inclusive, diverse, and multi-generational community. What drew Rabbi Treu here? All this plus “love,” she said. “It is the most warm and welcoming congregation.” The weekend before we spoke, some 300 people turned out at a picnic to welcome her. And while she already knew the congregation’s reputation for warmth, “I’ve been surprised by its vibrancy, the number of involved, super-active, and committed members. And the number of programs — I’m blown away.

“My role at Oheb Shalom is to bring all people together with unbounded love, energy, and creativity, to ensure that anyone who experiences our congregation feels embraced. Everyone is welcome to find a home at Oheb Shalom.”

The South Orange congregation, which was founded in Newark, is more than 160 years old and serves some 350 families. “Some family members have been there for 50 years — or their whole lives,” Rabbi Treu said.

As senior rabbi, Rabbi Treu will take on a mix of pastoral duties and will teach, lead services, “and walk through life with this community.” She said the intergenerational community includes a preschool, Hebrew school, young family program, and offerings for lifelong learning. It will now also include her own family — with her husband, Pavel Vaynshtok, and her three children, Jonah, Naomi, and Eloise, adding to the mix.

What is her role here?

Reticent about listing her own positive attributes, she said, “I have a big heart full of love for all people, for those who are still trying to figure it out, for those who love Judaism and those who don’t.” Growth occurs through connection, she said, and she will “bring love to people and help them find ways to connect.”

As for being part of an all-female clergy team, Rabbi Treu said, “just as all males have to find a way to make sure women are seen and heard,” so too will her team need to do this, but in reverse.

“Being a great spiritual leader does not depend on gender,” she said. “I don’t want anyone to view me as a female rabbi, but simply a rabbi who recognizes that we all hunger for connection, no matter our age, race, income, gender, marital status, denomination, or other belief system.”

Rabbi Treu is looking forward to the June 30 celebration, at which the departing clergy team “will have a chance to feel the love of the community, while the community itself will be able to mark the transition to new leadership.”

The fact that both of Oheb Shalom’s new clergy members are female is not an issue for synagogue president Paul Schechner. “We are delighted to welcome Rabbi Treu and Cantor Kissner following an extensive search for the most well-qualified clergy,” he said. “We chose Rabbi Treu and Cantor Kissner because both have the requisite temperament and spiritual conviction to build upon our legacy of social justice and inclusivity.

“When we convened our search for new clergy, we were not seeking female clergy specifically, only a rabbi and cantor who exemplified our mission and values. We were most fortunate to find Rabbi Treu and Cantor Kissner, who so exquisitely embody the whole of the congregation’s vision for the future while remaining rooted in our Conservative faith tradition.”