New Jersey Orthodox synagogues that hosted National Conference of Synagogue Youth events during the 1970s and ’80s, and the youth group’s professional and volunteer advisers at that time, are at potential legal risk from a lawsuit filed last week by five plaintiffs seeking damages for sexual assaults allegedly committed by Rabbi Baruch Lanner, who was director of the New Jersey region of the National Conference of Synagogue Youth from 1970 through 1999.

The five plaintiffs, who are not named in the suit, all were minors at the time of the alleged assaults.

Lanner has been charged, tried, found guilty, and imprisoned on similar criminal counts. This new suit, unlike the first, is a civil action, primarily targeting Lanner and his employers: NCSY and its New Jersey region; NCSY’s parent organization, the Orthodox Union; and the Hillel Yeshiva High School in Ocean Township, where Lanner was principal in the mid-1990s.

The suit alleges that the prominent institutions knowingly allowed the rabbi’s predatory behavior at NCSY and Hillel High School to continue, despite many long-standing complaints that he physically and emotionally abused some of the girls and boys in his charge. It claims that the organizations that employed Lanner, either directly or indirectly, were negligent in failing to supervise Lanner, and in failing to follow up on repeated reports of Lanner’s allegedly abusive, inappropriate, and criminal activities. According to the suit, one plaintiff reported Lanner’s conduct to NCSY’s national director as early as 1974.

And it also includes unnamed synagogues and other institutions “who were responsible for the safety of children who attended schools, programs, facilities, trips or events wherein Defendant Lanner committed the horrific acts of child sexual, physical and emotional abuse and harassment complained of herein.”

The lawsuit does not specify where the alleged abuse took place, though the plaintiff identified as Jane Doe #1 alleges that she was groped as a 13-year-old “approximately twenty or more times at weekend NCSY events in New Jersey over the course of two and a half years.”

Several Orthodox synagogues in northern New Jersey and Essex County hosted NCSY Shabbaton weekends in the school year 1977-1978 according to a former NCSYer of that era who refreshed his memory by consulting New Jersey NCSY yearbooks in his possession.

Lanner’s career as an NCSY leader ended in 2000, following an expose in the New York Jewish Week by its then editor, Gary Rosenblatt. Lanner resigned days afterward. The next year, the Orthodox Union’s executive vice president, Rabbi Raphael Butler, who had headed NCSY before taking the OU job, resigned under pressure following an investigation conducted for the Orthodox Union by Richard Joel, then head of Hillel International and later president of Yeshiva University.

The Jewish Week report also led one of Lanner’s victims at the Hillel Yeshiva High School to tell her parents of the abuse she had suffered in Lanner’s office and at Shabbatonim years before. She then filed a criminal complaint against Lanner, which led to the rabbi’s arrest. In 2002, he was convicted of sexual abusing her and another Hillel student. He was sentenced to seven years in prison, served nearly three years, and was released on parole in early 2008.

The current lawsuit was filed in Superior Court in Middlesex County in the final days of a two-year “lookback” window during which sexual abuse victims could come forward and sue their alleged abusers. Until then, a statute of limitations in New Jersey had inhibited any civil suits against the organizations that employed Lanner. The window closed at midnight November 30. The first four plaintiffs filed on November 29; the fifth joined the suit the following day, after reading the initial report on the case Mr. Rosenblatt wrote for the Jewish Telegraphic Agency.

The lawsuit seeks unspecified financial damages to be determined at trial.

In response to the lawsuit, three top executives of the OU and NCSY sent a letter to their board members around the country. In the letter, which the Jewish Telegraphic Agency obtained, the three rabbis say their leadership “shares deep regret for the suffering caused by past abuses” and is “firmly committed to operating in a manner that is consistent with the highest Torah and legal standards to ensure the wellbeing of our youth.” 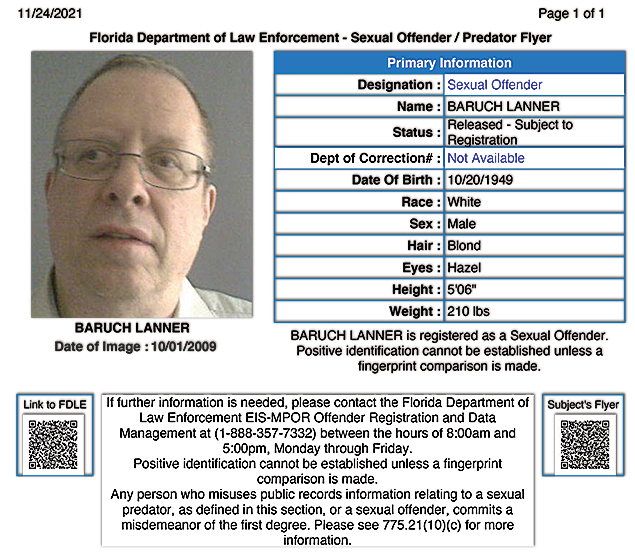 A flyer from the Florida Department of Law Enforcement’s sexual offender registry lists Baruch Lanner’s status as “Subject to Registration.” Lanner was convicted of sexually abusing two teenage girls who were students in the 1990s when he was principal at the Hillel Yeshiva High School in Deal. (FDLE)

In their letter, the heads of the OU and NSCY said “the resurfacing” of the Lanner scandal “reminds us of the ongoing pain suffered by his victims and of our tremendous responsibility to be vigilant and proactive in ensuring the physical, sexual and emotional safety of every participant in our programs. We may not permit the failures that allowed for the abuses committed by Lanner to be repeated.”

Their letter reiterated their organizations’ commitment to the “physical and mental safety of youth,” and noted that “strong policies and procedures … to prevent abuse” were put in place following the reports of the Lanner abuse two decades ago and have been “enhanced and expanded on multiple occasions over the years” and will continue to be reviewed going forward.

Several of the plaintiffs in the case, who suffered abuse from Lanner in their teens, told the Jewish Telegraphic Agency they felt that the OU and NCSY failed to reach out to them at the time to offer an apology or assistance.

“Our clients are going to finally hold Baruch Lanner accountable for his deplorable and abusive conduct, and the Orthodox Union accountable for giving a known offender decades of access to vulnerable children who he terrorized and victimized,” Boz Tchividjian, one of the attorneys for the plaintiffs, said. “By filing this lawsuit, these bold women are reclaiming the power that was taken from them by a perpetrator and the organization that employed him and empowered him.”

The women bringing the lawsuits say they believe the problem persists, and that despite impressive written policies and standards, systemic cultural change still is required at the OU and NCSY as well as at other institutions.

“What’s needed is for organizations to protect their members, not just protect their organizations,” said one of the plaintiffs in an interview with The Jewish Telegraphic Agency. She also said that neither she nor the other Lanner victims she knows were ever approached by the OU or NCSY with apologies or offers of assistance after their experiences became known through the Jewish Week report in 2000.

According to the lawsuit, when Lanner chose one of the plaintiffs, described in the court filing as Jane Doe #2, to be regional president of NCSY, she agreed on the condition that he not molest her. If he tried, she told him, she would report him to Rabbi Pinchas Stolper, NCSY’s founding director.

In response, Lanner laughed and told her she “wouldn’t be telling him anything he hasn’t known for years,” according to the lawsuit. In the 2000 Jewish Week article, Rabbi Stolper acknowledged that there had been several complaints many years earlier from young women about Lanner’s improper behavior, but he said he found no real substance to the charges.

Attempts by the Jewish Telegraphic Agency to reach both Lanner and Rabbi Stolper were unsuccessful.

During her time as president, Jane Doe #2 said she “witnessed Lanner prey on multiple 14- and 15-year-old girls,” according to the lawsuit.

The plaintiff identified as Jane Doe #4 was 12 when she was active in NCSY. According to the lawsuit, Lanner insisted on driving her home from a Shabbaton one Saturday night. He pulled over to a deserted parking lot, she said, told her to take off her shirt, and tried to kiss her.

“For me it closed the door for religion,” she told the Jewish Telegraphic Agency. “I feel that he took advantage of an innocent soul, and you can never get that innocence back.”

The two women who spoke to the Jewish Telegraphic Agency recently emphasized that their primary motive for filing a lawsuit almost a half-century after some of these painful incidents was not for financial gain or revenge, and that it was a difficult decision to wade into a legal battle against two large, prominent institutions.

“It always bothered me that the OU was never really accountable,” one of them said. “I do want my day in court because I want to see real change. I wouldn’t mind people seeing that a few women can change the way things are.”

The other echoed the sentiment, asserting that she wants “to see the culture change around sexual safety in Orthodox institutions.

“No real guilt was admitted. There was no true reckoning. The process of teshuva means acknowledging one’s mistakes, facing the hard truth.”

She said she was “delighted to see” that NCSY released a new Conduct, Policy and Behavioral Standards Manual on September 17, which includes guidelines on reporting “grooming behavior,” “boundary violations” and “inappropriate behavior with minors.” “Whether it was because they knew a lawsuit was coming or just a coincidence, it’s a very positive move,” she said.

She added that she hoped the lawsuit will be “an important catalyst.”

Mostly, she holds out the hope that when it comes to safety for all, the actions of the OU and NCSY will be “grounded in Jewish ethics and sources — not because someone is watching these organizations or suing them but because it is what God and our religion demands of us.”

Gary Rosenblatt of the Jewish Telegraphic Agency contributed to this story.