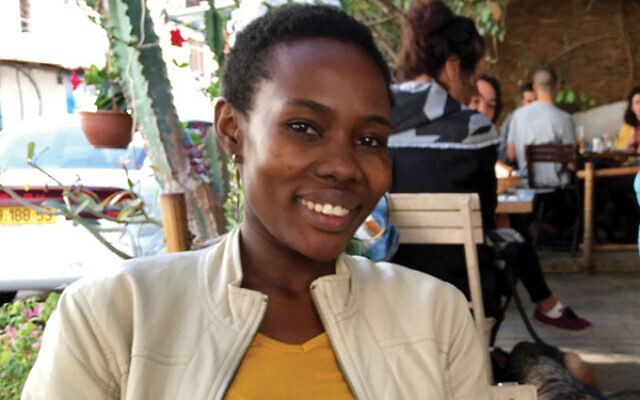 Shoshanna Nambi will discuss her journey to become a rabbi at Oheb Shalom Congregation on Dec. 13. Photo courtesy Shoshanna Nambi

Shoshanna Nambi always wanted to be a rabbi. She grew up in Uganda — in Mbale, one of the eight towns that make up the community of Abayudaya Jews. She walked to synagogue every Shabbat morning, kept kosher, studied in the Hebrew school there. As she grew up, she participated in youth groups and continued her education. She loved being part of the community, and, she said, “I enjoyed studying.”

But when she got older, she wasn’t so sure becoming a rabbi was a realistic goal; she had no idea where to begin. Instead, she studied business administration at the University of Kampala (a five-hour bus ride away) and got a certificate in HIV education. She worked in a variety of industries, for an agricultural company, and in health care.

Now 31, she is in New York City, in her second year of rabbinical studies at the Hebrew Union College-Jewish Institute of Religion (HUC-JIR), the Reform movement’s seminary.

On Friday, Dec. 13, she will discuss the Jewish community in Uganda and her journey to become a rabbi, during kabbalat Shabbat services at Oheb Shalom Congregation in South Orange. The evening will also include music from the Abayudaya community, led by Cantor Erica Lippitz.

The visiting cantors (Lippitz could not participate) recorded some of the community’s music; their recording — and numerous other examples of Abayudaya music — can be found on YouTube. Musicians — including Moriyah Webster on djembe, Dave Davis on piano, Jordan Aronson on clarinet, and Ellen Leavitt on flute — will play live at the service.

The Abayudaya do not claim to be a lost tribe; rather, they date their acceptance of Judaism to 100 years ago. British missionaries converted Uganda military leader Semei Kakungulu to Christianity in the 1880s, but he later soured on British imperialism and Christianity and elected instead to embrace the non-Christian parts of the Bible. He began to observe what is basically Torah Judaism and brought along members of his tribe.

As mission member Cantor David Lipp, president of the Cantors Assembly and hazzan at Congregation Adath Jeshurun in Louisville, Ky., wrote following the visit, “He guided his followers to observe the laws of Moses, and an organic Judaism was born.”

By the 1960s and ’70s, the Abayudaya’s numbers had dwindled to about 300, but they began to more frequently interact with Jewish communities throughout the world, and their numbers began to grow. Today there are an estimated 2,000 members of the community.

Jewish organizations like Kulanu and Be’chol Lashon, which seek to engage often isolated Jewish communities around the globe, have been working with the Abayudaya for several decades, helping arrange visits to the community and facilitating fund-raising.

As Nambi pointed out, it is not uncommon for Abayudaya students with the requisite educational background to receive scholarships to attend university, thanks to the generosity of outside Jewish communities.

Although the Abayudaya always considered themselves Jewish, the community underwent a Conservative conversion as a formality in 2002. Today there are five main synagogues, including a growing Jewish population in Kampala, according to Nambi.

Most of the community is led by Rabbi Gershom Sizomu, who received rabbinic ordination from the Conservative movement’s Ziegler School of Rabbinic Studies at the American Jewish University in Los Angeles. There are a few villagers who identify as Orthodox; they have been visited by Orthodox Rabbi Shlomo Riskin of Efrat, among others.

Nambi describes her home community as rural. “It’s a hilly area, very green,” she said. Many of the people are farmers. It includes Jews but also Christians and Muslims.

“We share celebrations in common,” she said. And she appreciates the diversity of beliefs. “On Sunday, the Christians go to church, on Shabbat the Jews go to synagogue, and the same for Muslims,” she said. “It’s a beautiful area to live in and form your identity.”

The community is facing serious challenges, from unemployment and lack of education to difficulty accessing clean water and exposure to diseases like malaria and typhoid. Many of the young people are leaving for the cities, where there are more opportunities, according to Nambi.

People within her village typically speak seven-eight languages, and even within the Jewish community they belong to different tribes and clans. “We all have different dances and different foods that add to the beauty and diversity of the community,” she said. (Uganda has two official languages, Swahili and English, but some 40 languages are spoken across the country.)

Nambi loves that her fellow Jews don’t take being Jewish for granted. “There’s no persuading people to come to shul; people just want to be there,” she said.

Because of their many decades interacting with Western Jews, the Abayudaya have incorporated some of the liturgy and melodies of Ashkenazi and Sephardi Jews into their practices. But some prayers, like L’cha Dodi and Adon Olam, have been set to compositions with African rhythms and drumming.

This year does not mark Nambi’s first interaction with American Judaism. (HUC-JIR rabbinical students spend their first year in Israel.) She previously spent three summers at URJ-Camp Coleman in Georgia. “There I met so many rabbis and I told them I had wanted to study to be one,” she said. They not only encouraged her, she said, they also contacted HUC-JIR to see if it would be a possibility. That paved the way for her, although she got a rocky start. Rejected on her first try, Nambi said she accepted it as a recommendation to undertake a year of learning, which she did in Israel at the Pardes Institute of Jewish Studies. She learned Jewish history and for the first time studied Talmud and Mishna.

She applied a second time to HUC-JIR and was accepted.

But after having lived for a time in Israel, she acknowledged it was a difficult place for her. “It was really frustrating to be in a place you really want to be because you think you have so much in common with everybody, but you are not valued,” she said. The Abayudaya, she said, “are not thought of as ‘part of’ even when you think of yourself as being ‘part of.’”

She found the treatment of African refugees there challenging, based on government action as well as comments from the public. “It was very nice on a day-to-day basis on the streets and with the people that I knew and the people that I lived with,” she said, “but it was really, really challenging and very frustrating and hard to live there.”

By contrast, she is finding her time in New York highly rewarding. She finds all the reading and writing “challenging,” she said, but she’s enjoying her studies and finding her way in the Reform movement. She’s even done some teaching: lessons on the Holocaust to seventh-grade students at the religious school at B’nai Jeshurun in Manhattan.

She pointed out that “It’s as if I’m also studying [the Shoah]” because students in Uganda do not learn about the Holocaust.

As for being among very few people of color at the seminary, she acknowledged, “I would love it if there were more people who look like me But I don’t think being a black person is a challenge at JIR-HUC.”

Looking ahead, Nambi said she hopes to return to Uganda and work. But she’s concerned. “I don’t think they are capable of sustaining a rabbi,” she said. (Sizomu makes his living as a member of parliament, not as the community rabbi.) She’s hoping to find an organization that might be able to help her return to Uganda, but if she can’t, she said, she might work here in the United States and find other ways to stay connected with Uganda.

In the meantime, she’s soaking up the experience along with her 10-year-old daughter, Emunah, a student at the Reform Rodeph Sholom School in Manhattan, where, her mother said, she seems to have integrated well and now plays on the soccer team and the basketball team. “She loves going to school.”

Nambi might be speaking for herself when she says of her daughter, “I think she just enjoys the adventure.”