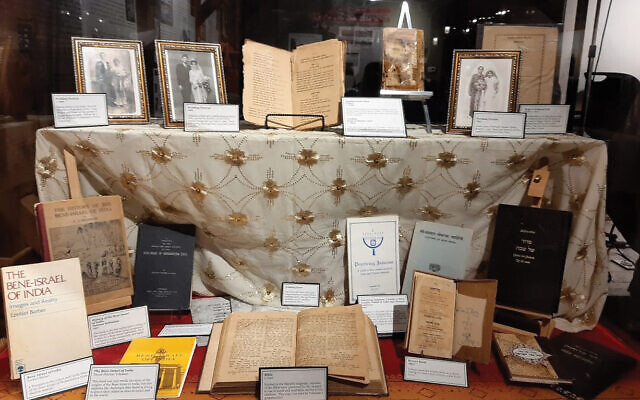 The fabric in this display on the Bene Israel, the largest of the Jewish communities in India, is Sophie Perry of Manalapan’s wedding gown and the Bible, bottom center, is more than 100 years old. Photo by Debra Rubin

As a child in Bombay — now Mumbai — Yochanan Perry’s Chanukah celebration included fried sweets, special tunes to the traditional blessings, and menorahs unique to each family or village.

The Jewish community of India — which some believe goes back 3,000 years and is one of the 10 lost tribes of Israel — traces its roots to before the destruction of the Second Temple. The first Jews to arrive in India were the Cochin, who came to the southern coast in what is now the city of Kochi.

“I realized many American Jews knew very little about the Jews of India,” Perry said. He spoke with NJJN in a phone interview after his appearance at the Dec. 15 opening of “Jews of India: The History and Practices of the Bene Israel, Cochin, and Baghdadi Jews” at the Jewish Heritage Museum of Monmouth County in Freehold. “People need to hear about our community because we are here, we live with them, and we are just as Jewish as they are.”

Perry, who lives in Manalapan, launched the exhibit more than a year ago when he offered to donate ritual objects and books.

Gila Rosenblatt of Matawan, one of several people who spoke at the opening, said her Cochin community believes it has been in India since the time of King Solomon, and that the people remained observant even while it developed Indian culinary traditions. “If [the non-Jewish residents] used milk or yogurt, we used coconut milk,” Rosenblatt said. “We had Jewish versions of Indian food.” 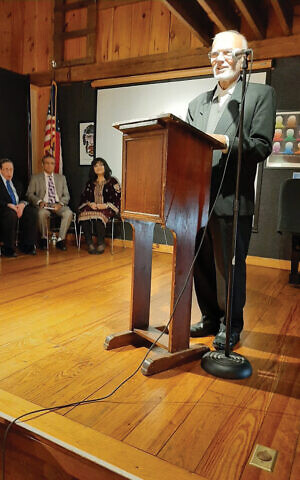 Sherona Varulkar, vice president of the International Organization of Bene Israel, another presenter, said the group has held onto its traditions over many centuries, including its belief that Elijah is the guardian prophet of the community.

“We blended in with the population as much as possible, but kept our customs,” said Varulkar, a native of Mumbai who now lives in Port Jefferson, N.Y. “We kept the traditions of Eliyahu HaNavi.” The Bene Israel are the largest of the Jewish communities in India.

Legend has it that the community began when a small group of Jews fled persecution in the Middle East and were shipwrecked on the Konkan coast anywhere from the eighth century BCE to the sixth century CE.

“Seven men and seven women survived and that was the start of the Bene Israel community,” said Varulkar, who was dressed in a colorful orange and bright blue sari with rows of bracelets hanging from her arms. “Every Bene Israel child knows this story.”

In an effort to mix into Indian society while keeping their Jewish identity, the community took Hebrew first names and Indian last names, but many added “kar” at the end of those surnames, said, and exemplified by, Varulkar.

The exhibit, which is expected to be loaned to other museums across the country, runs through August and includes ritual objects, artifacts, and photographs of Jewish life in India. Ritual items include a mezuzah and a handi, a fixture hung on the wall featuring two glass jars filled with water and oil. Each jar is lit at the start of the Sabbath. 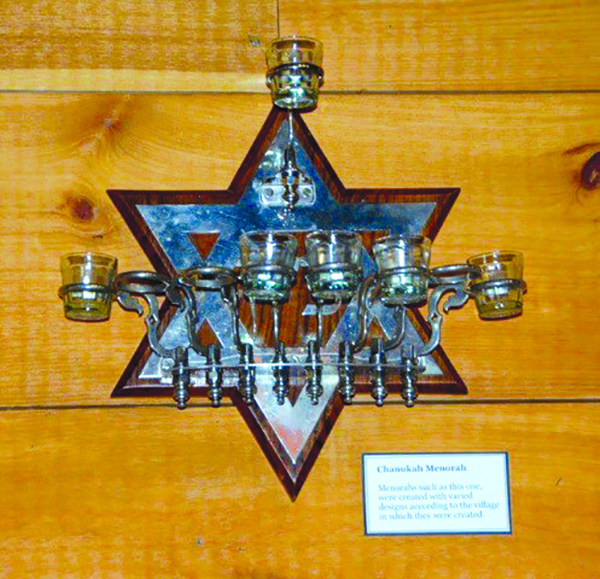 A Chanukah menorah whose design was unique to the village it came from. Photo courtesy of Jewish Heritage Museum of Monmouth County

A zumbar, which hangs from the ceiling, also contains glasses filled with water and oil and is decorated with flowers. The zumbar was used by the Bene Israel on holidays; on Rosh HaShanah and Simchat Torah the water would be colored, and on Yom Kippur it would be clear.

Some books on display are more than a century old, such as a Bible written in Marathi, a language spoken in Western India, from which Perry’s grandmother used to tell him stories.

The white and gold traditional Indian wedding gown of Sophie Perry, Yochanan’s wife, is draped inside a display case with books and photos of their wedding in India.

Approximately 60 people attended the opening, which featured several speakers and David Galsurkar, an Indian cantor from Brooklyn, who performed some of the songs of the Indian-Jewish community. Traditional Indian-Jewish desserts were served, such as a malida platter, comprised of sweetened rice mixed with coconut flakes, cardamom, almonds, and pistachios, and surrounded by fruit. The platter is served as part of a malida ceremony celebrated at weddings and other festive occasions and is also called the Eliyahu HaNavi because of the community’s legendary connection to Elijah.

In his remarks, Perry spoke about the modern state of India and called it a “strong ally” and trading partner of Israel. Perry, a retired journalist, was posted to Tel Aviv by the English-language daily Indian Express. He came to the U.S. with his wife and two sons after his paper reassigned him to cover the United Nations. In 1992 foreign minister Shimon Peres invited him to join the Israeli team that went to New Delhi to establish diplomatic relations with India. 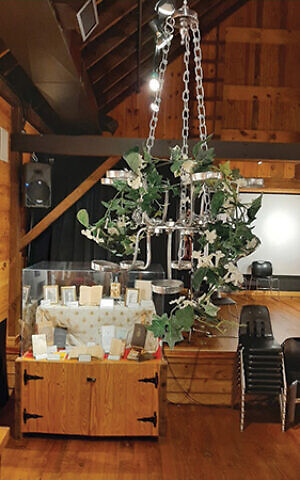 Hanging from the ceiling is a zumbar, which is lit on Jewish holidays. Photo by Debra Rubin

“The Jews of India never suffered from anti-Semitism due to the teachings of the Hindu religion, which centers around the virtue of tolerance,” said Perry, adding that the Muslim population also accepted their Jewish neighbors.

Today only about 3,000 Jews remain in India, according to Perry. More than 120,000 Jews of Indian descent live in Israel and several thousand more are scattered around the globe in countries that include the U.S., Canada, and Great Britain.

Two upcoming programs associated with the exhibit include a talk by Rosenblatt on the Jews of Cochin and a screening of “Shalom Bollywood: The Untold Story of Indian Cinema.” The 2018 documentary highlights the role Jewish actresses played in the first decades of the Indian film industry, which began a century ago at a time when it was taboo for Hindu and Muslim women to appear on film and most female stars were Jewish. The exhibit includes a display highlighting the little-known work of these Jewish actresses.

For information on the exhibit and related programming, visit jhmomc.org or call 732-252-6990