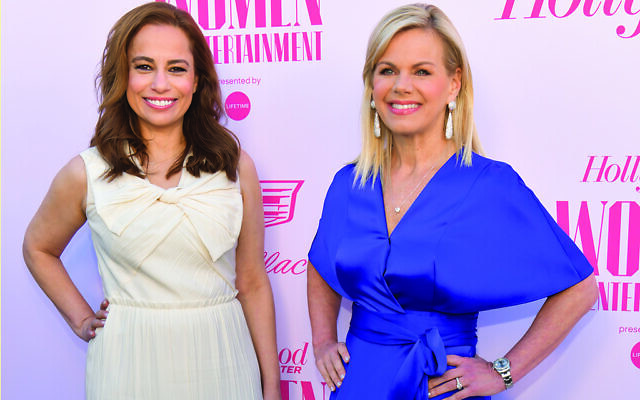 Political activist and Democratic strategist Julie Roginsky, the former Fox News Channel cohost who was also a contributor at CNBC and whose columns have appeared in Politico, Forbes, and The Star-Ledger, said her approach to life today owes something to her experience as the child of Soviet-Jewish dissidents.

“I was born in Moscow and raised initially by my grandparents,” said Roginsky, 46, in a phone interview with NJJN. “My parents were not my primary caregivers until we were told we could leave the Soviet Union on Feb. 18, 1980….” Her grandparents, who were denied exit visits and became Refuseniks, she said, “were forced to stay there until 1990. I was taken away from those who raised me until I was 7. After that, nothing else scares you.”

She certainly said fear did not prevent her from filing her 2017 sexual harassment lawsuit against Fox News, its former chair and CEO Roger Ailes, and its copresident Bill Shine, which was settled in December of that year. “I went through that with Gretchen Carlson” — the broadcast journalist who left Fox News in 2017 and also filed a lawsuit again Ailes. “What I went through when I was young has helped me focus.”

Roginsky said life wasn’t easy after she and her parents, Abram and Tanya, departed the Soviet Union — they left with $90 — as the three worked their way through Vienna, Rome and New York before settling in Plainsboro.

“My parents were both educated people, but in the United States, they had to take menial jobs to start,” she said. “I was able to attend a private school, Princeton Day School, as a scholarship kid, but that didn’t stop me from being bullied and called a ‘commie.’”

She overcame the obstacles and went on to earn both her bachelor’s and master’s degrees at Boston University and was hired by EMILY’s List — a political action committee whose mission is to help elect pro-choice Democratic female candidates to office — to work on a campaign in Maine. She entered New Jersey politics for the first time in 1998, helping U.S. Rep. Frank Pallone (D-Dist. 6) defeat Republican challenger Mike Ferguson.

In 1999, Roginsky ran the Democratic coordinated campaign in New Jersey — the first woman to hold the position; in 2001, newly elected Sen. Jon Corzine (D-N.J.) appointed her as his Washington-based communications chief.

In 2003, she formed the Comprehensive Communications Group, a political consulting and public relations firm located in Hoboken that is Roginsky’s base of operations. Clients have included elected officials, such as New Jersey Sen. Cory Booker and the late Sen. Frank Lautenberg, as well as nonprofit organizations and Fortune 500 companies. New Jersey Democratic campaigns over the last 20 years have sought her advice and she became an in-demand political commentator from the Democratic side.

In addition, since 2005 Roginsky has served on the board of directors for the Women’s Campaign School at Yale University, a nonpartisan leadership program whose aim is to increase the number of women in elected and appointed office.

“I’ve been very blessed in life and been able to build an incredible career after really coming from nothing,” she said. “Today, I want to be the one who speaks up for those who are unable. I have been quite upset, through my whole experience, with the toxic attitudes I have seen toward women in inner political circles. I feel it’s the same playbook as I saw before with television.”

Because of this, Roginsky believes many women are declining to work on New Jersey campaigns.

“In 1997, when Jim McGreevey ran unsuccessfully for governor his first time, his team’s makeup was 50-50 women and men. Today, I’m the only woman in the room because I guess I’m used to it. Most women working on political campaigns in New Jersey got fed up. The reason I survived is I kept my mouth shut for many years. Not now.”

That has brought Roginsky, this past December, to a partnership with Carlson and Diana Falzone, another Fox News alumnus, in creating “Lift Our Voices,” an online initiative to put an end to non-disclosure agreements, which they believe are forced on women in sexual harassment settlements.

“Women just want to work and be appreciated for what they do,” said Roginsky, who lives with her son, Zachary, 7, in New York City. “We need to continue to speak. It’s important no other women go through what Gretchen and I and so many others out of the spotlight did. It’s a big part of my work now.”