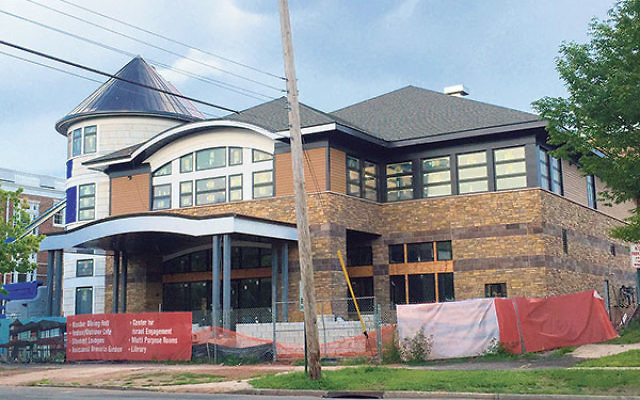 The Eva and Arie Halpern Hillel House is nearing completion and is expected to open in about two months.

Executive director Andrew Getraer said the donations to Hillel’s capital and endowment campaign have brought the total raised to $15.3 million as of Aug. 29.

The opening of the 40,000-square-foot building on College Avenue in New Brunswick, originally scheduled for this month, has been postponed about two months by construction delays. Hillel staff operations will be moving in gradually through the end of October.

The three donated “major spaces” are the Betty and Arthur Roswell Reform Sanctuary; the Ruth and Leonard Cole Tribute Hall, honoring the “pillars of modern Israel”; and the Littman Family Wellness Center, endowed by Barbara and Leonard Littman.

The arrival of the gifts “means so much to us,” said Getraer in a phone interview with NJJN. “This is representative of the confidence felt by the major leadership of the Jewish community that Hillel is a good place to invest in the Jewish future to ensure a vibrant Jewish community.”

Among the features of the new Hillel house will be a 400-seat dining hall that will serve Shabbat and holiday meals and will be designed to easily convert for programs, films, and cultural presentations. Getraer said that, with the new building, Rutgers will share honors with the University of Wisconsin for having the largest Hillel facility in the country.

The Littmans, residents of Highland Park, are longtime supporters of the Jewish Federation in the Heart of NJ, the Rutgers athletics department, and the Herbert & Leonard Littman Families Holocaust Resource Center at the university’s Allen and Joan Bildner Center for the Study of Jewish Life.

Leonard is the retired president and CEO of Littman Jewelers; Barbara is an interior designer, architect, and adjunct professor of design at the New Jersey Institute of Technology in Newark.

Barbara Littman said the general idea of a wellness center to provide psychological and substance abuse counseling had been broached by Hillel officials.

“It just hit home with me,” said Littman. Active in drug and alcohol addiction recovery issues for 30 years, she sits on the boards of the Hazelden Betty Ford Foundation Council in New York, the Adult Substance Abuse Program (ASAP) at the Middlesex County Adult Correction Center in North Brunswick, and the Ronald McDonald Houses of Long Branch and New Brunswick.

“I think it’s very important to create an atmosphere at Hillel for people who are troubled and need help to be able to come and get immediate assistance because sometimes these things take a very long time at universities,” said Littman. She said she envisions the center’s being staffed with counselors, including clinical professionals, to direct troubled students to resources for recovery.

Dr. Leonard and Ruth Cole, of Ridgewood, have been active in Jewish life and supporters of Israel for decades. They sit on the NJ-Israel Commission, and Leonard served as national chair and Ruth as vice chair of the national Jewish Council for Public Affairs.

He also served as chair of the Birthright Israel Committee of Jewish Federations of North America.

Ruth, an educator and counselor, is a past president of the NJ State Association of Jewish Federations, and has held many leadership positions with Hadassah, currently serving as its main representative to the United Nations.

While Leonard, director of the terror medicine and security program at Rutgers New Jersey Medical School, said he was “dazzled” by the success of Birthright Israel — which brings Jewish youth on free trips to Israel — he knew it wasn’t “a magic bullet” to ensure Jewish continuity and connection to the Jewish state.

Noting that anti-Israel activity on campuses has grown, he said that “Hillel is a major stalwart in support of Israel.” He said that during visits to the new building under construction, he and his wife were so impressed, “whatever figure we had in mind was multiplied.”

Cole said the tribute hall will feature displays focusing on leaders — half American and half Israeli — who played a pivotal role in Israel’s founding and growth, as a means to foster students’ Jewish and Israel engagement.

The Roswells of Bridgewater, members and leaders of the Reform congregation Temple Beth-El in Hillsborough, previously gave Hillel a challenge grant to fund a Reform outreach rabbi or leader at Hillel.

Arthur Roswell told NJJN that prior to making the grant, the couple had made small donations. However, while meeting with some students, Betty asked what being a Reform Jew meant to them. She and her husband were dismayed, she said, to hear answers like not having to keep kosher or observe Shabbat.

“Both we and the Hillel people realized they were doing a pretty poor job of educating these kids on Reform Judaism,” Arthur said, resulting in the decision to make the matching grant.

In making the latest grant, he said, the couple hopes the new building “will bring more Jewish people together socially and to participate in community service projects together.”

“We hope it will educate young people about their heritage,” he said. “We also very much hope they will develop a relationship with the Jewish world outside Rutgers, and not just Israel.”

Both Roswells have served on the board of the SHW federation — he is a former president — and are on the boards of the American Jewish Committee’s Jacob Blaustein Institute for the Advancement of Human Rights and the Shimon and Sara Birnbaum JCC in Bridgewater. She is currently a board member of the Reform movement’s Hebrew Union College-Jewish Institute of Religion.

Arthur, who holds a doctorate in metallurgic engineering, worked in management for several engineering firms. He has served as vice president of the Central New Jersey Jewish Home for the Aged, now the Wilf Campus for Senior Living, and is on the board of its Stein Hospice.