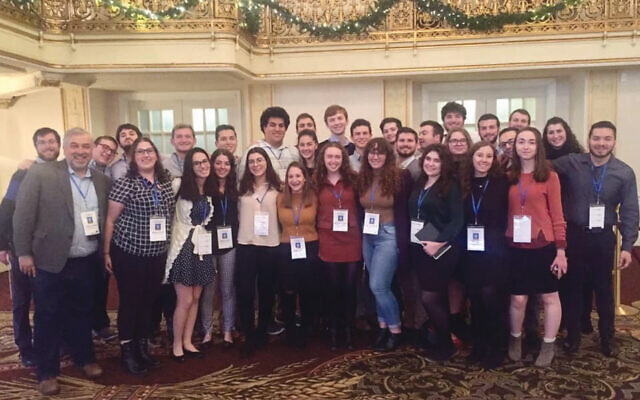 As Rutgers student Benjamin Nechmad stood in front of the Tree of Life synagogue in Pittsburgh, he realized something startling. “It was very scary to think about,” he said, “but I never associated that in my country, America, anti-Semitism could happen this way.”

“It was very emotional,” said Nechmad, cochair of the Orthodox community at Rutgers Hillel, describing his visit to the scene of the deadliest anti-Semitic attack in U.S. history. “But here it was, a real place, and we were standing in front of a typical synagogue that looked like my synagogue. I was not expecting such a familiar site in such a terrible context,” said the 23-year-old urban planning and design student from Sharon, Mass.

Nechmad was part of a delegation of 30 Rutgers Hillel students, the largest contingent at a Nov. 24 conference focusing on anti-Semitism on college campuses. The gathering, at the Omni William Penn Hotel in Pittsburgh, drew about 300 students from across the country.

Though the stop at the synagogue — where, on Shabbat, Oct. 27, 2018, a gunman shot and killed 11 congregants and wounded seven — lasted only several minutes, it had a powerful impact on Rutgers Hillel president Brooke Getter.

“I didn’t expect to feel as much as I did,” said the 21-year-old junior, an engineering major from Fair Lawn. “I said Kaddish, as did some others. Then I had to get back on the bus, where some of us broke down. We were able to get through our feelings by kind of holding each other. It gave meaning to what we did at the conference.”

The Rutgers students had spent Shabbat the day before the conference at the Jewish University Center, which serves the University of Pittsburgh, Duquesne University, and Carnegie Mellon University.

“I think the subject of anti-Semitism is obviously in the minds of everybody in the Jewish community,” said Hillel executive director Andrew Getraer. The Rutgers participants, he said, “felt it was important to head to the conference to learn and understand the issues and hopefully bring back ideas we can use on campus — and be prepared for anything that might happen in our midst.”

Rutgers “thankfully” has had no major issues with anti-Semitism on its New Brunswick campus, Getraer said.

“Our Rutgers [Jewish] community is very strong and well-organized and has a very strong voice on campus,” he said. “That is not the case at a lot of campus communities.”

The conference was sponsored by IACT (Inspired, Active, Committed, Transformed), a 12-year-old national initiative that began in Boston to build on the success of Birthright — the program that offers free trips to Israel to young Jews — and now has a presence on 30 campuses throughout the United States.

The Rutgers students attended as part of its Hillel’s #StandUp AgainstHate program, a yearlong initiative largely funded through the Jewish Federation in the Heart of NJ.

Nechmad said he was particularly taken by two of the speakers, both of whom had undergone — as a result of education and personal experiences — a transformation and demonstrated that it is possible for people to evolve and change.

One of those speakers was Frank Meeink, a former neo-Nazi skinhead gang member who, while serving time in prison, had befriended people of different races and ethnicities. He now lectures nationally about his transformation.

Another was Egyptian-born Hussein Aboubakr Mansour, who spoke about the rise of anti-Semitism in the Arab world. Curious about Israel and the Jewish people, he sought information from outside sources. He was jailed as a “Zionist agent” and underwent torture. After his release, he was granted political asylum in the United States.

“Some people just happen to be in circumstances, through no fault of their own, where anti-Semitism is institutional,” said Nechmad. “These people are filled with a lot of anger and sadness, and Jewish people often get the brunt of that anger and sadness.”

In his remarks Meeink spoke of his violent and abusive childhood in south Philadelphia; as a teen he was recruited to join a gang by members who offered him support and friendship — and who indoctrinated him in their racist and anti-Semitic ideas.

Mansour explained to the gathering that Egyptians are fed a diet of lies about Jews and Zionism by official sources and had no easy access to facts to mitigate their hatred.

“It really struck me that people everywhere are human beings,” said Nechmad. “These people are filled with pure hatred and have no understanding of why they feel this hatred.”

Getter said the conference was “an amazing experience.” She was impressed by her fellow student leaders and the efforts they organize on their campuses. She said she would return to Rutgers armed with resources and organizations to turn to should they be needed.

Some of the stories of egregious instances of anti-Semitism she heard from the other students and speakers, Getter said, “blew my mind. To think we are in the 21st century, and this type of thing still happens….”

However, like Nechmad, she came back with the new perspective that even those “who have gone off the deep end” can change and turn away from the rage and hatred that have poisoned their lives.

“I heard a lot of perspectives from different speakers, and each resonated differently,” said Getter. “I have a lot to reflect on.”