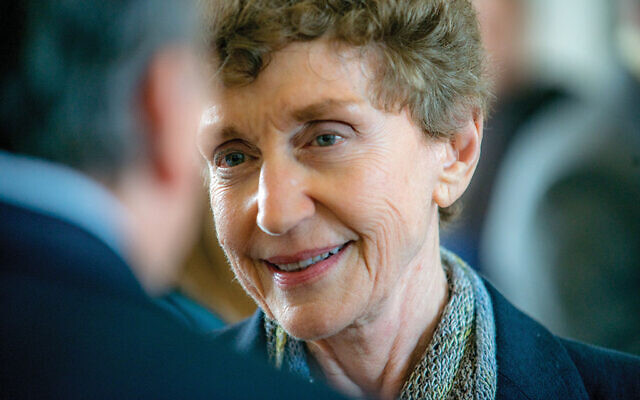 Soon after she started teaching English at Rutgers University in the early 1970s, Dr. Ruth Mandel heard rumblings about the formation of an academic center focused on women and politics. She jumped at the opportunity to volunteer and soon became the founding director of the Center for American Women and Politics (CAWP), serving and was at the helm from 1971-1994.

“Ruth really created a culture where there wasn’t one,” said Debbie Walsh, the CAWP director since 2001. “She wanted to make democracy better, and both increase and make others aware of women’s roles in it.” CAWP is part of the Eagleton Institute of Politics, a more-than-60-year-old institution at Rutgers University which, according to its website, explores state and national politics through research, education, and public service.

Mandel, a leader in her field, died April 11 of complications from ovarian cancer. She was 81.

Her daughter said Mandel’s childhood experiences of fleeing Austria and becoming a refugee led to her deep devotion to politics.

“The whole experience shaped my mother’s impression of the United States and made her aware of the power of democracy all her life,” said Maud Mandel, president of Williams College in Williamstown, Mass., in a telephone interview with NJJN.

Ruth Mandel was born in Vienna in 1938. Her parents, Mechel and Lea (Schmelzer) Blumenstock, fled Nazi persecution in Austria on the S.S. St. Louis with 9-month-old Ruth. Cuba and the United States denied entry to the more than 900 passengers and the ship eventually returned to Europe, but the Blumenstock family was among 288 people rescued by Great Britain. The family were refugees in England for nine years before gaining entry to the U.S. in 1947. Maud Mandel said her mother’s family appreciated their good fortune, as 254 of the passengers who returned to Germany were murdered in the Shoah.

“My mother had no direct memories of the St. Louis, but it shaped our family history,” she said.

Maud spent 20 years as a history and Judaic studies professor at Brown University in Providence, R.I., but her mother’s professional life was focused on women in politics.

“She spent her whole career creating a political process for women,” said Maud. “She was always at the center of that. She was a superstar in that area.”

Ruth Mandel earned a bachelor’s degree in English from Brooklyn College and a doctorate in American and English literature from the University of Connecticut in 1969. She met and married her first husband, Barrett Mandel, while in graduate school, and Maud was born in 1967. They lived in Brooklyn but moved to Princeton when Ruth and Barrett began teaching at Rutgers University. (They divorced in 1974).

The Mandels were members of The Jewish Center (TJC) in Princeton, a Conservative congregation.

“Judaism mattered to my mother,” said Maud, who celebrated her bat mitzvah and was married at TJC. She described her mother’s connection as “more cultural than religious.”

Ruth Mandel’s teaching evolved into several esteemed leadership positions. Walsh of CAWP credits her with building the national prominence of the center, which has held large conferences from 1983 to 1991 for women elected to state legislatures. Discussions would include weighty topics such as abortion and sexual discrimination.

“Women in office hadn’t discussed these issues in such a forum previously,” said Walsh, who joined CAWP in 1981. “This was another [example] of Ruth creating new opportunities for women in politics.”

She also established the center’s “Election Watch,” which promotes female candidates who have filed or are likely to file and run for public office. “Ruth was the person who created all of this,” said Walsh. “It didn’t exist before.”

Mandel authored numerous publications about women’s evolving political roles, including her 1981 groundbreaking book, “In the Running: The New Woman Candidate,” which was the first extended account of women’s experiences as candidates for political office.

She served as director of the Eagleton Institute from 1995 to 2019 and remained a senior scholar at CAWP until her death. From 1991-2006, Mandel held a presidential appointment to the United States Holocaust Memorial Council, the governing board of the U.S. Holocaust Memorial Museum in Washington, D.C.

And in addition to her accomplishments in academia, Maud said she was a “devoted mother and grandmother.”

“Her integrity and leadership represented the best of Rutgers,” Nancy Sinkoff, academic director of the university’s Allen and Joan Bildner Center for the Study of Jewish Life, told NJJN.