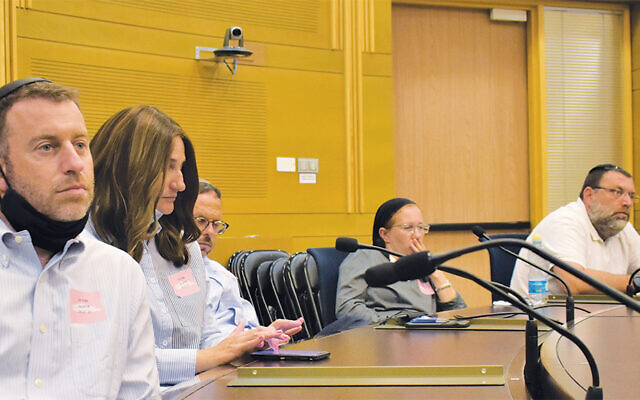 Among the local participants at this Knesset meeting were Rabbi Daniel Alter of the Moriah School in Englewood, left, and Dr. Shoshana and Rabbi Chaim Poupko of Congregation Ahavath Torah in Englewood, right.

Delegates from the recent week-long Religious Zionists of America-Mizrachi rabbinic and communal leadership mission, the first since the pandemic, returned to their home communities. Their goal is to advocate for Israel in their communities and with their local politicians.

The trip brought them to the communities hardest hit by the recent violence in Israel. There they met with victims of the violence and acts of terror, had high-level meetings with members of Israel’s recently installed government, and also met with Israel’s Ashkenazi chief rabbi, Rabbi David Lau, and other leading Israeli rabbis.

The delegation was made up of the next generation of Orthodox Jewish communal leaders, including many who either were recently installed in their leadership roles in influential shuls or who educate the leaders of tomorrow.

Local participants included Rabbi Daniel and Rivka Alter from the Moriah Day School in Englewood and Yeshiva University’s High School for Girls in Queens, N.Y., respectively; Rabbi Aaron Feigenbaum from the Irving Place Minyan in Woodmere, N.Y., who grew up in Teaneck; Rabbi Steven Miodownik from Ahavath Achim in Highland Park; Rabbi Jonathan and Dr. Yael Muskat of the Young Israel of Oceanside and Yeshiva University; and Rabbi Chaim and Dr. Shoshana Poupko of Congregation Ahavath Torah in Englewood.

The trip included a meeting with Dr. Leah Goldin, the mother of Israel Defense Forces’ Lieutenant Hadar Goldin, was presumed to be killed during the 2014 Operation Protective Edge in the Gaza Strip, when he was 23. Hamas has held onto his body ever since, along with the body of comrade Staff Sergeant Oron Shaul.

Pre-pandemic, Dr. Goldin and her family spent months advocating on behalf of their son; but meetings haven’t been possibly during the last 18 months. The RZA communal leaders on the mission promised to assume the responsibility to bring Lt. Hadar Goldin’s story back into their shuls and classrooms, and to call on their local political leaders and advocacy organizations to work to pressure Hamas to return the bodies for proper burial.

After touring the destruction in Lod, the group announced the creation of the Israel Community Fund in partnership with Mizrachi Worldwide, the National Council of Young Israel, and other U.S.-based Orthodox synagogues and communal institutions.

“Throughout our trip, we saw how painful the last 18-months has been on both ourselves and our brethren in Israel,” said Rabbi Ari Rockoff, RZA’s executive vice president. “Meeting with the families who been so traumatized by the recent violence and meeting with the Goldins left us with the motivation to do everything we can for our brothers and sisters in Israel. Our sages tell us Kol Yisrael areivim ze lazeh, and after seeing with our own eyes the needs of our brethren, we are ready to come home and act.”

For more information, go to rza.org.