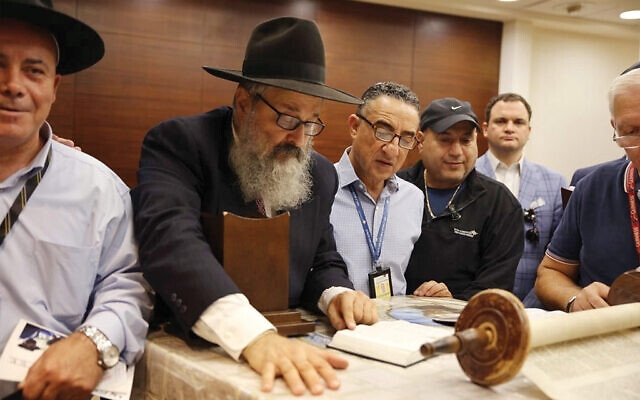 This fall, a Holocaust survivor who has given close to two dozen sifrei Torah to Jewish institutions in New York, New Jersey, and Israel gave the latest rescued scroll to the Chabad synagogue at Israel’s Ben-Gurion Airport.

Edward Mosberg, 93, survived internment in the Plaszow and Mauthausen concentration camps and lost his entire family in the Shoah. He and his wife, Cecile, an Auschwitz survivor, have been married 72 years; they have three daughters, six grandchildren, and three great-grandchildren.

By his count, Mosberg has “rescued” 23 Torah scrolls that came out of the Holocaust in Europe; he purchases them and has them checked and repaired to ensure they are kosher. “I’ve given two Torahs to Yad Vashem, one to the Israeli military, and others to different schools and synagogues in New York and New Jersey,” said the Morris Plains resident.

His latest donation “is over 200 years old, from Poland,” Mosberg, himself a Polish native, told NJJN in a phone interview.

Mosberg’s friend, Rabbi Mendy Carlebach — administrator of Rutgers Chabad in New Brunswick and codirector of Chabad of North and South Brunswick — delivered the scroll to its new home on Oct. 28. With him were his father, Rutgers Chabad executive director Rabbi Yosef Carlebach, and Mosberg’s daughter and son-in-law, Louise and Stuart Levine of Parsippany and their son Barry.

(Rutgers Chabad and Chabad of North and South Brunswick are part of Chabad of Central NJ, which is not affiliated with the Rabbinical College of America, the New Jersey headquarters of the Chabad-Lubavitch movement.) 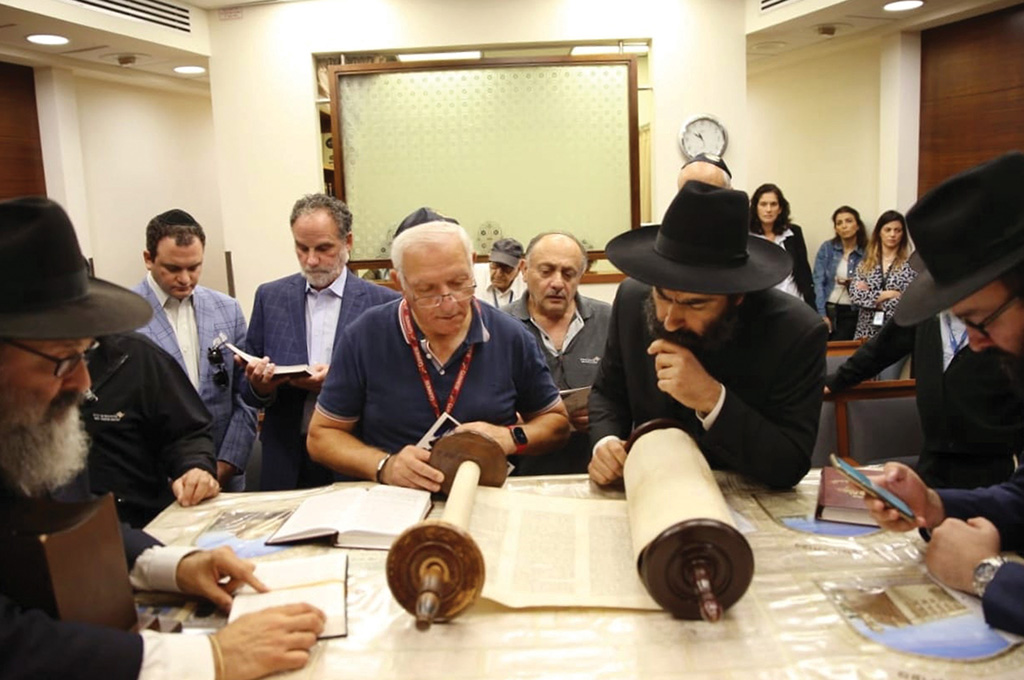 The rescued Torah scroll donated by Edward Mosberg is read for the first time in its new home, the Chabad shul at Ben-Gurion Airport.

The scroll was dedicated in memory of brothers Harry and Joseph Wilf; Harry’s wife, Judy; and Joseph’s son, Sidney. The Wilf brothers, both survivors, were the owners of Garden State Homes, a major real estate development company based in Short Hills, and they were the ones who helped Mosberg in his career in America in 1954.

“Harry and Joe took me into their business, and they were my friends,” said Mosberg. “I was their partner, and they were the best people. As long as I live, I will never forget the Wilfs.”

Mark Wilf of Livingston, the son of Joseph and Elizabeth Wilf, longtime leader of the N.J. Jewish community, and now president of Jewish Federations of North America, told NJJN, “Given our family backgrounds as survivors of the Holocaust, this was a very meaningful dedication, especially in the Land of Israel, which is so important to our family.” The dedication was particularly touching coming from Mosberg, “who has dedicated so much of his life to remembrance and speaking about his own personal journey,” said Wilf.

When Mosberg told Mendy Carlebach he wanted to donate the scroll to the airport synagogue, the rabbi assumed it would be easy to arrange. But he was informed that a tax equal to 18 percent of the scroll’s value would have to be paid, the amount to be determined by the donor and recipient. This was confirmed by the Israeli consulate in New York.

“Then I thought about it,” Carlebach said, “and realized that technically the Torah wasn’t entering the country of Israel; it was staying in the duty-free zone of the airport. The tax authority said, ‘You may have a point.’”

The Torah scroll was eventually approved to be brought to the synagogue — tax-free.