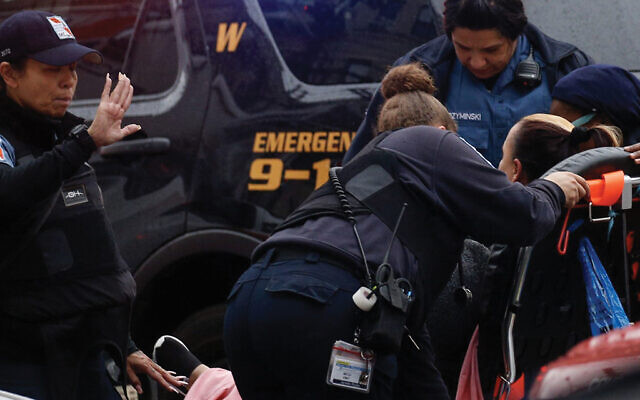 A woman receives medical assistance at the scene of a shooting in Jersey City, Dec. 10. (Kena Betancur/AFP via Getty Images

Six people — a police officer, three civilians, and two gunmen — were killed during a violent, four-hour shootout Tuesday. Police said “hundreds” of rounds of gunfire were exchanged as two gunmen fired from a Jersey City kosher grocery store located next to the Greenville Beis Midrash and a nearby yeshiva.

All area schools — both public and private — were ordered locked down.

Jersey City Police Chief Michael Kelly said during a Tuesday-evening press conference that the gunmen used high-powered rifles during their stand-off with police. Police called in assistance from other law enforcement agencies, including the FBI, the Port Authority of New York and New Jersey, and the New York City Police Department.

Kelly identified the slain officer as Detective Joseph Seals, 39, a married father of five and a 15-year veteran of the force, and said two other officers were wounded, one in the body and one in the shoulder. Both were treated and released at a local hospital.

He said there was also a stolen van “that may contain an incendiary device” that was also being examined. “There were five dead in the store,” Kelly said. “Two are bad guys and the others may be civilians.”

Asked who shot the officers and civilians, he replied: “We think this was all bad guy fire, including the victims in the store. … We have no inkling what the motive was yet.”

He said the kosher grocery store, JC Kosher Supermarket, had not been specifically selected by the gunmen, and sources said it was not a hate crime.

According to WNBC-TV, Seals had approached a stolen van near the Bay View Cemetery that had been linked to a murder in Bayonne, last weekend. At that point, the gunmen got out of the van and shot and killed Seals. Afterward they got back in the van and drove through the nearby Orthodox Jewish community. When they stopped, they ran into the grocery store, killing a civilian as they entered. An employee in the market had left the building only minutes earlier.

The gunmen were described as two young male juveniles.

Rabbi Dovid Kaplan, director of Hatzolah EMS of North Jersey, told NJJN that they were called by someone in the community at 12:45 p.m., and as of press time he had one ambulance and five volunteers on the scene.