The sanctuary of Temple Sharey Tefilo-Israel in South Orange will remain empty as High Holiday services will be livestreamed. Photo by Joy Yagid

With the increasing likelihood that the life-changing effects of the Covid-19 pandemic will extend well beyond the summer, area congregations are brainstorming potential alternatives to the usual High Holiday services. Temple Sharey Tefilo-Israel in South Orange (TSTI), however, has already decided the direction it will go: digital.

“Based on the information that is currently available to us, preparing for services that are entirely virtual is the only responsible approach,” wrote Max Weisenfeld, TSTI president, in an email conversation with NJJN. “Whatever the authorities decide, the welfare of our members comes first, and it has become clear to us that many, if not a majority, of our members would be at risk being in close quarters for many hours in September.”

The Reform congregation’s rabbis and board of directors unanimously decided that members should stay put and log on to “Home for the Holy Days: Worship, Gratitude, Forgiveness, and Community.” They’ve even designed T-shirts congregants can wear during the service, which will be open to members and non-members alike. “We wanted something light that created a smile (and a bit of communal connection) as we shared the otherwise difficult news that we won’t be together physically,” Weisenfeld wrote.

The decision to go digital, as expressed in a letter to the congregation and a May 12 Facebook post by Rabbi Daniel Cohen, was made because “The preservation of life takes precedence over all the other commandments in Judaism.”

Several other local synagogues are planning for an entirely different kind of High Holiday experience this year, but unlike TSTI, few are clear yet about what they will look like. Most believe it is too soon to call for digital-only services.

“September is a long way away,” said Farrell Borine, director of operations at Bnai Keshet, a Reconstructionist congregation in Montclair. “So much is changing on a daily and weekly basis.” He added, “We could decide after July 4 and still be fine.”

Meryl Natter, director of synagogue administration at Congregation Agudath Israel of West Essex in Caldwell (CAI), felt similarly. “It’s too pessimistic,” she said about deciding in the spring to go virtual in the fall.

Weisenfeld said TSTI considered other options but rejected them as untenable, and making the decision now gives the congregation a head start on planning. “This approach, which is the one we are taking, allows us the opportunity to reimagine worship and invites a level of creativity we don’t generally enjoy,” he said.

Other synagogues are developing frameworks for varying scenarios — depending on state and Centers for Disease Control and Prevention guidelines — that include both streaming and in-person opportunities. While they are waiting to learn how far New Jersey Gov. Phil Murphy will open the state by September, most are resigned to the idea that even if synagogues can open, capacity will be limited. (This year, Rosh HaShanah begins on the evening of Sept. 18.)

And as Audrey Napchen, executive director of Temple Sinai in Summit, pointed out, even if New Jersey is open, “does that mean people will actually come?” 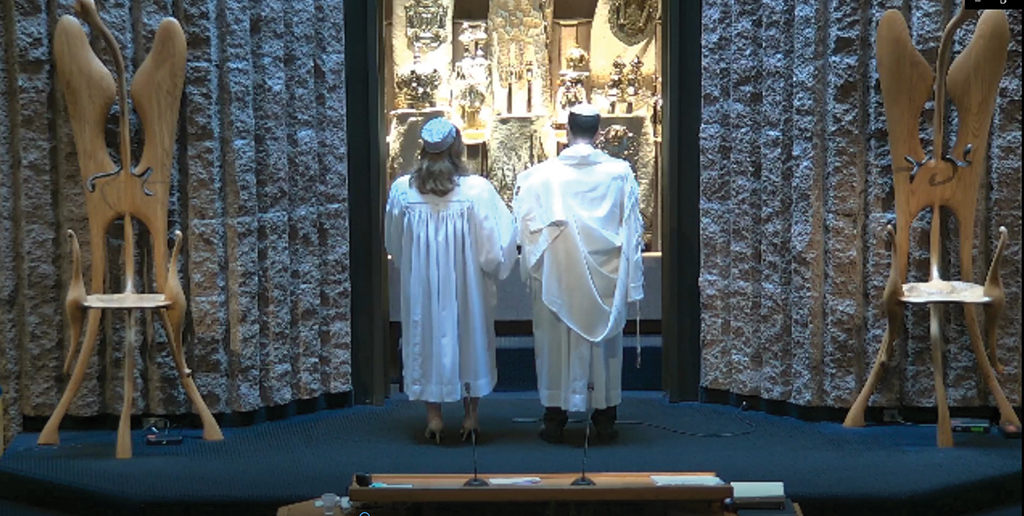 Said Natter of CAI, “We know we will be streaming something,” but beyond that she isn’t sure. “Maybe we’ll have the opportunity to do small gatherings,” she said. “Maybe some people will be in the sanctuary while some people are streaming.” The congregation is putting together a task force and will participate in webinars led by the United Synagogue for Conservative Judaism, the Conservative umbrella organization, but Natter expects to recreate, in some form, their usual array of High Holiday offerings, including services for tots, older children, and families, as well as the main sanctuary experience. “We will do what we have to do to make it amazing,” she said.

But she is realistic. “It will be sad, and there’s a loss …  especially for people who are alone and for whom coming to synagogue on the High Holidays is a huge part of the year.” And like representatives from other synagogues, Natter is concerned about hits to the bottom line, which could come from a combination of lost High Holiday ticket sales, fewer — and lower — High Holiday appeal contributions, and congregants declining to renew their memberships. “Anyone who thinks there will be no impact is being dishonest,” she said.

Gail Milchman, executive director at the independent Temple B’nai Abraham (TBA) in Livingston, envisions three potential scenarios for the High Holidays: regular services with everyone in the building, a partial opening with limited attendance and some streaming, and services that are entirely virtual. But she acknowledged that holding regular services is such a remote possibility that they are focusing on the other two options — and she’s not even sure they should bother considering a partial opening. “Even if we have permission to open [with a reduced] capacity in September, unless the numbers of deaths and hospitalizations goes down even more, I don’t think we’re going to.”

While most synagogue administrators said it was too soon to make a call about High Holiday services, Milchman feels differently. TSTI’s early decision to go virtual “gives permission to other synagogues in the area to think that way,” she said. In the meantime, she’s focusing on ways the clergy can help replicate the feeling of being in the building, from using an image of the sanctuary as a backdrop for the rabbi and cantor to creating a spiritual, though virtual, musical experience.

Matt Halpern, executive director of Congregation Beth Shalom in Livingston, is confronting a dizzying array of questions about this year’s High Holidays: How will they conduct Selichot? What will tashlich be like when throwing crumbs into a body of water with one hand and holding a phone in the other? How can they make the array of services they usually offer available online? Will any of the services be held inside the building?

But looming above it all is the million-dollar question: “How do we make observing the High Holidays a meaningful experience other than sitting in front of a device for a period of time?” Halpern asked. “We are starting to navigate our way through, but right now, there are far more questions than answers.”

Said Milchman of TBA, “We want to make the holidays as festive and as beautiful as people have come to know it,” but, she admitted, “I just don’t know if that’s going to be possible.”