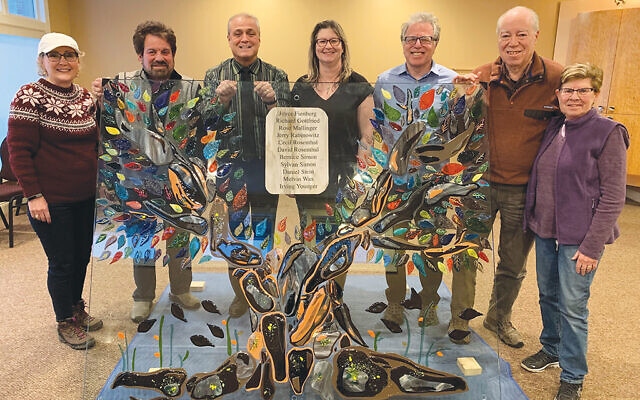 On a recent December afternoon, as snow squalls enveloped the area, artist Maggie Green of Bedminster put the finishing touches on a glass sculpture depicting a Tree of Life, its branches festooned with multi-colored foliage, but with 11 black leaves fallen below it.

Her work, installed on a wall at Temple Shalom of Succasunna, is the Reform congregation’s memorial to the victims of the shooting at the Tree of Life-Or L’Simcha Congregation in Pittsburgh on Oct. 27, 2018. The finished artwork will be unveiled at a dedication service during Shabbat Vayechi, Jan. 10-11.

“When people walk in and see the memorial, they’ll be reminded that anti-Semitism and intolerance are alive in America today,” said Howard Goodkin, a Temple Shalom board member who spearheaded both a congregational visit to the Pittsburgh synagogue and the creation of the memorial. “Every time people walk in, they’ll know who those 11 people are, and it will be a stark reminder of what’s happening in this country today.”

Green, 25, created a rendering in glass of a colorful, vibrant, though battered tree, with 11 black leaves scattered on the ground and with the names of the victims inscribed on a plaque. “I wanted it to tell a story,” said Green. “I wanted the tree to look damaged, as if hit by lightning, but still stable. I didn’t want it to look fragile. I wanted it to be a sparkling symbol of strength.”

In the aftermath of the shooting, congregants reached out to the Pittsburgh synagogue with a letter that apparently resonated with its members. Temple Shalom was invited to send a group to visit the congregation last April for Shabbat HaGadol and around 20 members went. Since then, temple members have been working to create the memorial to ensure that the incident and the victims are not forgotten.

For Goodkin, it’s all about speaking out in any way possible. “Not to be silent — that is the key,” he said. 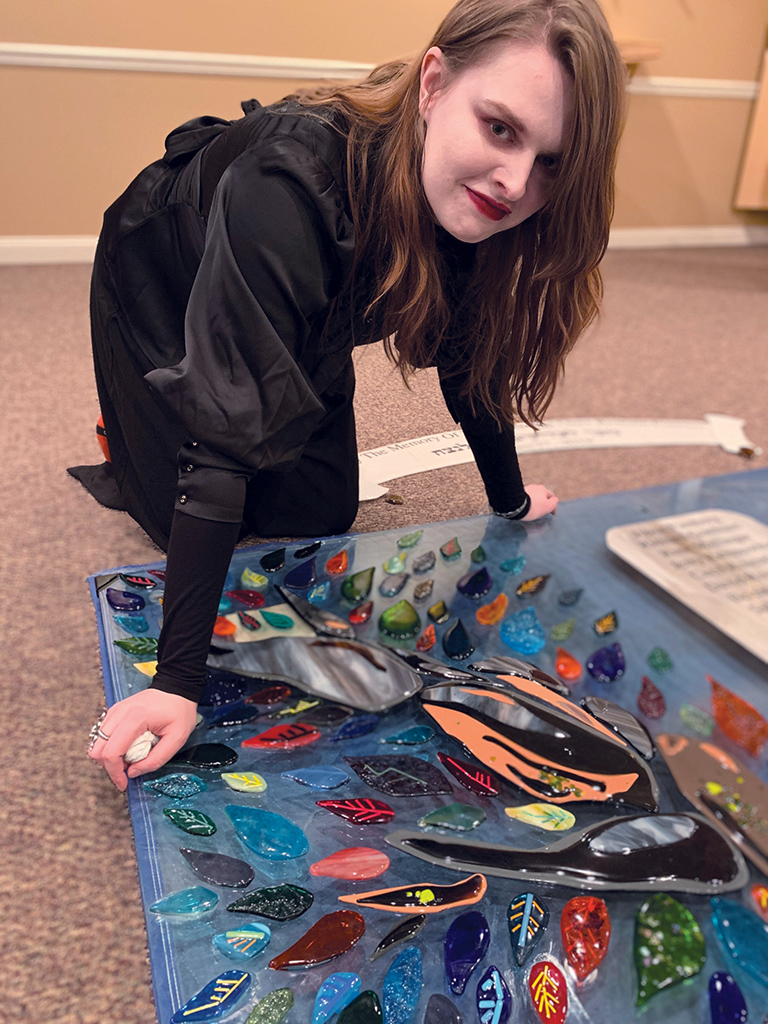 Artist Maggie Green puts the finishing touches on the Tree of Life memorial to those killed in the synagogue shooting in Pittsburgh in October 2018.

The completed artwork reflects the evolution of a design first conceived of by congregants Donna and Elliot Chalef, who envisioned a Tree of Life split in two. Their concept was one of 20 submitted to the congregation. The committee considered artists working in different media before settling on Green. It marked her first commission. “It’s the biggest thing I’ve ever done,” she said of the 6-foot-by-5-foot piece that took her five months to complete. “It was an incredible honor.” Green holds a degree in sequential art from Savannah College of Art and Design in Atlanta.

She also created a miniature version of the artwork to present to Tree of Life in Pittsburgh.

“As daunting as creating this memorial is, we are doing this to bring the community together and show our love and support for each other,” said Temple Shalom president Jeffrey Newman.

The congregation will dedicate the memorial during Shabbat services. Among the attendees will be visitors from the three congregations that share the Pittsburgh synagogue: New Light, Dor Hadash, and Tree of Life. Also expected to attend are Dani Dayan, consul general of Israel in New York; Russell Robinson, CEO of Jewish National Fund; Dov Ben-Shimon, CEO of Jewish Federation of Greater MetroWest NJ; and Rabbi David Saperstein, president of the World Union of Progressive Judaism.

“The goal of these services is to stand together as one community in the fight against bigotry regardless of our faith or race,” said Temple Shalom’s Rabbi-Cantor Inna Serebro-Litvak in a statement. “This is not only a Temple Shalom event, it is an event that we share with our whole community and hope will be seen, felt, and replicated as broadly as possible.”