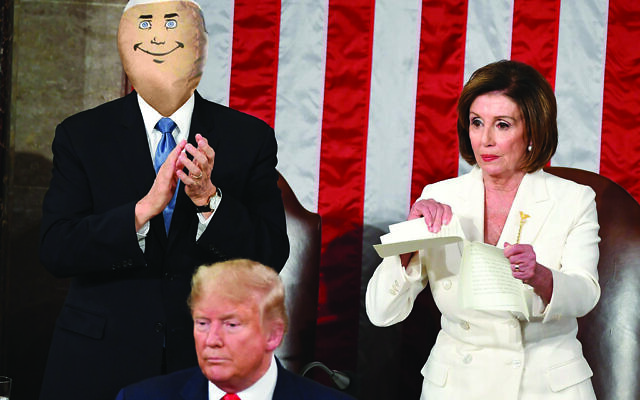 The Donald’s No. 2 Doll: A staple from Nancy Pelosi’s ripped State of the Union speech pierced what appeared to be the real Veep. Getty Images

Washington, D.C. — In a two-hour- and-37-minute impromptu press conference on the White House lawn, President Trump confirmed for the first time that Vice President Mike Pence “disappeared, sort of” more than a year ago and has not been heard from since.

In his place, the president confirmed, an inflatable rubber “VP Pence” doll has accompanied the president at cabinet meetings, campaign stops, and all other public appearances.

Observers had long commented that Pence was expressionless in public — Republican officials preferred the term “stoic.” But sharp-eyed Twitter users noted that Pence had started to look surprisingly life-like, raising suspicions it couldn’t be the real him.

The dramatic revelation first came to light at the end of the president’s most recent State of the Union speech. While most eyes were on Nancy Pelosi tearing up a copy of the president’s talk, a congressional aide heard a sharp “pop” and noticed “VP Pence” slowly deflating in its chair next to the House Speaker. One of the staples from Pelosi’s copy of the speech had apparently pierced the vice-presidential doll.

It also explains a Jan. 28 tweet by the president declaring, “There is no inflation!”

Reporters immediately peppered the president with questions about what happened to the uncannily stiff but apparently sentient former governor and congressman from Indiana.

Trump, insisting that he now be called “His Royal Donald,” and speaking without the benefit of a script, notes, coherent sentences, or adoring admirers, blurted: “Look. Annoying guy. Too religious. Wife’s not my type. Never left his side. Jeez. Said my red ties are too long. Big mistake. Huge.”

The president continued: “I’ve got no comment on that tape of the call from my office telling the Secret Service to ‘get rid of Mostly Mute Mikey.’ Wasn’t me. Sounded like me, yeah. Go check out Alec Baldwin. Lousy actor. Maybe it was him. Call was fine. It was perfect.”

Sen. Lindsey Graham, the Trumplican from South Carolina, said that if foul play was involved in Pence’s disappearance, “the Senate will make it a priority to look into this matter in the years to come.”

As the president was about to board a helicopter for his residence in Florida, he turned to the press and asserted: “And even if, say, I assigned the guy to head up a commission on voter fraud and he was never heard from again,  what’s it to you? Wanna impeach me again?”

He added: “By the way, since you guys think you’re so smart, I got the ‘VP Pence’ doll from the same place that made my ‘First Lady Melania’ doll three years ago, and you guys never even noticed.”