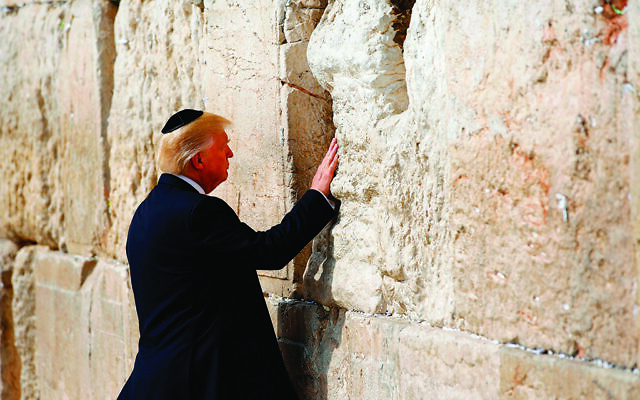 That some proud Jews hail Donald Trump as the “first Jewish president,” while others call him an anti-Semite, tells much about Trump — and even more about Jews today.

Finally, Trump’s tweet-from-the-hip “you people” rhetoric and his inexcusable “good people on both sides” comment about Charlottesville’s neo-Nazis sound like a Jew-hater’s words — or dog whistles.

This gap in perceptions shows that today’s Jews are as polarized as everybody else. Religious Jews ask, “What’s the difference between Trump and liberal Jews?,” snickering: “Only Trump has Jewish grandchildren.” Liberal Jews simply ask, “What’s the matter with them?”

This grand chasm also warns that Israel, the glue that united Jews from left to right, religious and non-religious, for decades, risks becoming another flashpoint.

Anyone who blames Trump for creating the polarization, or leftist alienation from Israel, has no memory. But anyone who doubts that Trump has made it worse has no credibility.

Jews will survive Trump’s presidency. America will, too. Yet so will the internal and external tensions that preceded — and partially created — Trump’s polarizing tenure.

Gil Troy, a Distinguished Scholar of North American History at McGill University, is the author of “The Zionist Ideas” and “The Age of Clinton: America in the 1990s.”