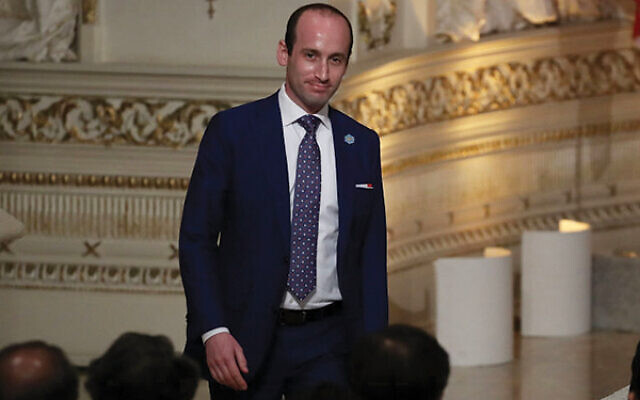 Liberal and centrist Jewish groups are calling for White House adviser Stephen Miller to resign following the disclosure of emails showing that he promoted white nationalist literature and racist immigration stories during the 2016 presidential campaign.

President Donald Trump still supports Miller, his lead strategist on immigration, despite the calls for his head by civil rights leaders, Democratic lawmakers, and religious leaders.

“Regardless of what Trump says, it is important to continue to sound the alarm that someone who is connected to white nationalists is running the administration’s immoral immigration policy,” said Rabbi Jill Jacobs, executive director of T’ruah: The Rabbinic Call for Human Rights. “He is someone who is running a policy that is introducing cruel and immoral circumstances for potential immigrants and refugees.”

The Anti-Defamation League and Rabbi Rick Jacobs, president of the Union for Reform Judaism, said their groups signed onto a letter, sent to the president on Monday from the Washington-based Leadership Conference on Civil and Human Rights, condemning Miller for representing “white supremacy, violent extremism and hate” and demanding his “removal from his position as your senior adviser.” The National Council of Jewish Women is also a signatory to the letter.

Although the American Jewish Committee did not sign the letter and until now and has remained silent on the issue, it released its own statement this week calling for Miller’s ouster.

“In this proud, principled, and supremely successful nation of immigrants, Stephen Miller’s immigrant-vilifying and white nationalist views are reprehensible,” said Jason Isaacson, the AJC’s chief policy and political affairs officer. “As the latest reports of his correspondence once again reveal, he is unsuited for the role of senior advisor to the President of the United States.”

A White House official said Miller “is not going anywhere” and that the president “has his back.” And, in defending Miller, who is Jewish, the White House said the attacks on him were “anti-Semitic.”

T’ruah is one of six liberal Jewish organizations that have started an online petition urging Miller to resign. The other groups are Bend the Arc: Jewish Action, IfNotNow, Jews Against White Nationalism, The Jewish Vote, and Never Again Action.

This is not the first time Jewish groups have called for Miller’s ouster. In February 2018, 17 Jewish groups — including the left-leaning J Street — sent an open letter to then-White House Chief of Staff John Kelly calling on him to dismiss Miller. The letter, which was spearheaded by the National Council of Jewish Women, complained that Miller “has been an obstacle to passing widely-supported, bipartisan, popular, badly-needed immigration policy changes throughout his time in the administration.”

The new campaign against Miller began after the Southern Poverty Law Center’s (SPLC) Hatewatch investigative team published more than 900 emails Miller had sent to the editors at Breitbart News while serving both as aide to former Alabama Sen. Jeff Sessions and later as an adviser to the Trump campaign.

Katie McHugh, a fired Breitbart staffer, shared the emails with the SPLC. She is said to have once supported the alt-right but later came to denounce it. The emails show that Miller had recommended stories from sites popular among white supremacists, including VDARE, a news site that says it defends “the racial and cultural identity of America” and American Renaissance, a monthly online publication published by the New Century Foundation, which describes itself as a “racist-realist, white advocacy organization.”

In their online petition, the six Jewish groups wrote that Miller is the “architect of the Trump administration’s cruel and endless attacks on immigrants. And with irrefutable proof of his deep-seated racism, xenophobia, and Islamophobia, and with evidence that he has promoted websites spreading anti-Semitic conspiracy theories, he cannot be allowed to remain a federal employee.”

They also rejected the administration’s claims that Miller’s critics are anti-Semitic.

“As American Jews, we are outraged that this administration would use the rising anti-Semitism for which it is responsible to deflect away from its embrace of white nationalists like Miller. The White House is trying to render the word ‘anti-Semitism’ meaningless, while simultaneously inciting violence against Jews. American Jews will not be spoken for. We speak for ourselves, and our demand is clear: Stephen Miller must resign.”

Left-wing and some centrist Jewish groups say Trump has emboldened white supremacists and anti-Semites by being slow to criticize far-right extremist groups, and has himself engaged in rhetoric promoting racist and anti-Semitic ideas. Trump and his supporters have denied this, and point to his support of the Israeli government and his Jewish family members.

In an earlier letter to the president, sent last Thursday, Vanita Gupta, president and CEO of The Leadership Conference on Civil and Human Rights, issued a statement calling Miller a “hate enthusiast.”

“Unless and until Trump fires Stephen Miller and all who promulgate bigotry and hate — and abandons his administration’s anti-civil rights agenda, including the Muslim ban and family separation — he will continue to be responsible for the violence fueled by that hate,” Gupta said.

Numerous Jewish groups belong to the coalition of more than 220 national organizations, although the statement came from the group’s leader.

Rabbi Jill Jacobs said she, along with 23 rabbis and Arnold Eisen, chancellor of the Conservative movement’s Jewish Theological Seminary, toured the southern border earlier this month to evaluate for themselves the conditions of migrants there. They visited overcrowded shelters and met with some of the tens of thousands of South and Central American asylum seekers sent back to Mexico to wait for an interview under a new administration policy.

She draws a straight line between the white supremacist tone of the articles and web sites recommended by Miller and the policies he has promoted inside the White House.

“Trump speaks of immigration in the most racist tones possible,” she added. “He is talking of wanting immigrants from primarily white countries like Scandinavia, and that asylum seekers trying to come across the border now are criminals when they are often families who are escaping danger in their own country. That is exactly the same reason so many of our families immigrated to this country.”

Steven Steinlight, a fellow at the Center for Immigration Studies (CIS), a think tank that has supported the Trump administration’s efforts to lower immigration, said he believes Miller “showed poor judgment regarding the groups he associated with on the issue of immigration.”

He said that CIS believes the U.S. should be a warm and welcoming country for immigrants but that the number of immigrants entering each year should be cut in half.

“The president is not going to remove Stephen Miller to satisfy a bunch of liberal Jewish hypocrites,” Steinlight told NJJN. “If I were the president, I would take Stephen Miller aside and say, ‘There are some groups that make me uncomfortable and I would appreciate it if you would not maintain ties with them or quote them. If you have these connections, I would like to see you break them.’”

He noted that in the past CIS has had “academics who came to our events, and when we found that some espoused racist views, we cut ties with them.… If I were his [Miller’s] rabbi, I would say, ‘Stay away from those who have agendas that are troubling.’”

Since publication of the emails, several Democrats — including presidential candidates Bernie Sanders and Amy Klobuchar — have called for Miller’s ouster. Both the Congressional Black Caucus and the Congressional Asian Pacific American Caucus also called for him to resign. Rep. Alexandria Ocasio-Cortez (D-N.Y.) started her own online petition that calls on the president to dismiss Miller “for his brazen white supremacy.”

“He’s a verified White Supremacist controlling US immigration policy, which has now detained over 70,000 migrant children,” she wrote. “This is not to be dismissed. People’s lives are at risk.”

Toward the end of last week, she said her petition had more than 28,000 signatures.