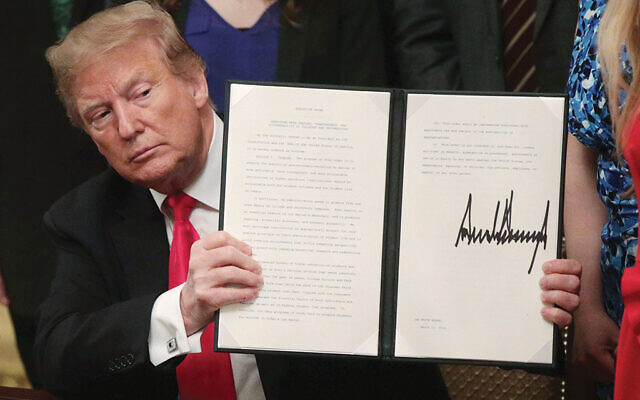 President Trump at last week’s signing ceremony for an executive order extending protections for Jewish college students under Title VI of the Civil Rights Act. The order touched off a heated debate in the Jewish community. Getty Images

Together with some of the largest Jewish organizations, Rutgers University Hillel in New Brunswick is lauding President Donald Trump’s executive order recognizing that Jews should be covered under the anti-discrimination protections of Title VI of the Civil Rights Act of 1964.

“Jews can be protected the same way every other group is,” said Rutgers Hillel director Andrew Getraer. “And that is something that we should celebrate.”

As Trump prepared to sign the order, constitutional law scholar Alan Dershowitz proclaimed it a “game changer [that] would go down in history as one of the most important events in the 2,000-year battle against anti-Semitism.”

Indeed, the vast majority of Jewish organizations and several Christian organizations praised the president for signing the order when, as the National Council of Young Israel put it in a statement, “the anti-Semitic BDS movement [is] poisoning the environment for countless Jewish students on college campuses throughout the United States.”

Some of the largest Jewish groups, including the American Jewish Committee and the Anti-Defamation League, welcomed the order as an important tool in fighting anti-Semitism in educational settings. A smaller but vocal group has objected to it, mainly on free speech grounds. They join a number of academics who argued that the order was unnecessary, has the potential of curbing free speech, and “won’t change anything.”

The president’s Combating Anti-Semitism order is meant to close a perceived gap in who is protected under Title VI, which bars discrimination in federally funded programs based on race, color, or national origin. Since Jews don’t clearly fall into any of those categories, the order says students do not lose protection “for also being a member of a group that shares common religious practices.”

“Existing federal policy has not been fully enforced and today’s order merely gives Jews what other groups have long enjoyed — the right not to be subject to a hostile environment on campus,” the AJC said in its statement.

But Jeffrey Veidlinger, director of the Frankel Center for Judaic Studies at the University of Michigan, suggested that clarification is unnecessary because the U.S. Department of Education “can already take away [federal] funding from colleges if it feels Jews are being discriminated against.”

One example is the 2011 civil rights case alleging that Rutgers created a hostile environment for Jewish students.

The charges in that case stem from an event organized by pro-Palestinian groups on campus who charged an admission fee only to attendees who appeared to be Jewish. The students contacted the Zionist Organization of America, which filed a federal lawsuit on their behalf. In 2018, the Department of Education reopened the case four years after it had been dismissed. The case is ongoing.

Such investigations have been the policy of the Department of Education since 2010 when it announced that Jews, Muslims, and Sikhs should be considered as covered under Title VI, according to Kenneth Stern, director of the Bard Center for the Study of Hate.

“In fact, I brought a case in Binghamton on behalf of some Jewish students in response to such things as ‘Kick a Jew Day’ when I was with the American Jewish Committee,” said Stern, who had served as the AJC’s director of anti-Semitism and extremism. That 2011 case was settled when the Vestal Central School District agreed to take specific steps to monitor and remedy anti-Semitic bullying.

More troubling to critics of the executive order is its adoption of the working definition of anti-Semitism formulated in 2016 by the International Holocaust Remembrance Alliance (IHRA). Included in that definition are examples of when anti-Israel rhetoric can take the form of anti-Semitism. As Livingston native Jared Kushner, the president’s son-in-law and senior adviser, put it in a New York Times op-ed defending the order, “The Remembrance Alliance definition makes clear what our administration has stated publicly and on the record: Anti-Zionism is anti-Semitism. The inclusion of this language with contemporary examples gives critical guidance to agencies enforcing Title VI provisions.”

Stern, who helped draft the IHRA definition, and others say the IHRA definition was not meant to be a legal document, and that applying it in the campus debate could stifle free speech by Israel’s critics. Congressional legislation that contained essentially identical wording as Trump’s executive order stalled, Stern said, over free speech concerns.

As the New Israel Fund put it in a statement objecting to the order: “It will be used to silence dissent and smear those who speak up for the rights of Palestinian people and a peaceful future for all, and will contribute to a dangerous chilling effect on college campuses. Protecting our fundamental freedom of speech is essential in any democracy, and that includes our right to speak out against unjust actions of governments.”

Stern worries the order would “give Jews a reputation of shutting down speech that Jews don’t like, and it would also make it risky for professors who want to teach about different issues in modern Israel because they may feel they would be transgressing the law.”

But Susan Tuchman, director of Law and Justice at the Zionist Organization of America, said she saw no reason for concern, insisting the order would not curb freedom of speech. “The way in which Title VI will be enforced will not change,” she said. “The office has respect for the First Amendment and will continue to do so.”

What it will do, she said, is cause professors to think twice.

“At Columbia University several years ago there was a professor who refused to allow a Jewish student to ask a question because he had reportedly served” in the Israel Defense Forces, she recalled. “Now, I hope that faculty member will think twice before such harassment and intimidation in the classroom.”

Asked whether she agrees that the executive order is therefore superfluous, Tuchman said: “No, because there is good reason to question whether the Title VI policy was being vigorously enforced under the Trump administration. And if someone else were to come into the Office of Civil Rights at the Department of Education, the policy could be changed. This executive order cannot be subject to change by whoever happens to be leading the Office for Civil Rights.”

Getraer believes that had the order been in effect in 2011, the Rutgers students never would have had to go to court, in part because of uncertainly without the language clarification over what constitutes anti-Semitism. Students initially took their grievance to the university administration, but it declined to investigate.

“University administrators have told us that…they are not sure what to classify as anti-Semitism,” said Getraer. “It’s a hard call for them.”

Rutgers Hillel and New Jersey federation leaders had been trying to get Rutgers to adopt this definition for several years, according to Getraer. “We believe that [the executive order] will help to clarify and define anti-Semitism in ways which have been very difficult for university administrators.” He added, “I think if this executive order existed, then the university would have taken greater care to resolve that issue in-house, before we ended up in a federal lawsuit.”

The ADL also supported the adoption of the IHRA definition.

“Under the Order, criticism of Israel can be, and often is, protected speech, but the line must be drawn when such expression becomes intentional, unlawful, discriminatory intimidation, and harassment against Jews,” ADL said in a statement.

Nevertheless, Rabbi Jack Moline, president of the Interfaith Alliance, said that while people have the right to express criticism of Israel, “people have different definitions of what constitutes bigotry and what is political criticism. I don’t think you can solve the problem with an executive order. That’s simply a policy statement from the president. And I am of the opinion as a First Amendment advocate that restricting free speech is a mistake. And as a Jew, singling out Jews for special treatment — be it good, bad, or indifferent — is a recipe for disaster.”