The headquarters of Silberstein, Flexner and Gottlieb, which stood at the intersection of Kipp and Rose Streets in Newark in 1911. Photos courtesy Jewish Historical Society of NJ

A few months ago builder Glen Newman, owner of Newman Building Concepts, began renovating a house in Ocean Gate. As he was cleaning out the residence to modernize its contents for a rental property, Newman made a startling discovery: In the basement he found a heavy, 16-inch square cement stone. On one side was an English inscription, “I.F. Silberstein, Sept. 3, 1883,” and on the other side was Hebrew lettering. Newman couldn’t tell its exact weight, but it was heavy enough for him to know that he would need a flatbed truck to transport it.

“I knew this was some kind of Jewish artifact from the Hebrew inscription on the back,” he said. “From what I gathered, this has been in this house for some time and it belongs in a museum.”

Newman, who is not Jewish, recognized the artifact as a cornerstone for a building, but neither he nor the previous owner, also not Jewish, knew where the stone originated or how it arrived at the Ocean County home. Even now, after months of sleuthing and enlisting the help of volunteers and historical society professionals, some details remain shrouded in mystery.

After discovering the stone, Newman’s first call was to a Jewish resident of Ocean Gate, Cantor Emeritus Daniel Green of Congregation B’nai Israel in Toms River, who translated the words above the Hebrew inscription as a common phrase to memorialize an individual, “to be remembered forever will be my name from generation to generation.” Underneath is the name, in Hebrew, Yitzchak Shraga the son of Yitzchak Shraga, and the Hebrew date of the second day of Rosh Chodesh Elul 5643, which corresponds to Sept. 3, 1883, the same date written on the English side.

But here the plot thickens.

“It is memorializing someone, but is it I.F. Silberstein? Because he didn’t die in 1883,” Green told NJJN.

Green reached out to the Jewish Historical Society of NJ (JHS). There, archivist Jill Hershorin found a record for an Isaac P. Silberstein (as opposed to I. F.), Silberstein who died at the age of 64 on May 26, 1907, and is buried in Union Field Cemetery in Irvington. Hershorin wonders if perhaps the cemetery records were originally copied by hand and the “F” was misread as a “P.”

In fact, there was a local Isaac Fievel Silberstein, who was born in 1843 in Germany, and died, as recorded on the stone in the Union Field Cemetery, on May 26, 1907, at age 64, according to Newark researcher and historian Mark Gordon, who sits on the board of trustees of the Newark Preservation and Landmarks Committee. Gordon surmised that, if indeed the stones were made for the same individual, the reason the cornerstone unearthed by Newman used an F for the middle initial whereas the gravestone used a P was because Silberstein anglicized his name from Fievel to Philip. 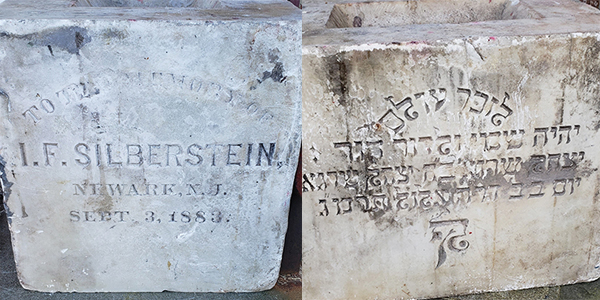 The Hebrew side of the cornerstone memorializes “Yitzchak Shraga, the son of Yitzchak Shraga”; the other side is dated Sept. 3, 1883 and includes the name I.F. Silberstein.

Isaac F. Silberstein, Gordon confirmed to NJJN, was a player in the bustling hat business that existed in Newark at the turn of the century. A 1908 edition of “The American Hatter,” a leading industry trade publication at the time, contained a small article about the Silberstein, Flexner and Gottlieb company moving into a larger space in a building under construction at Kipp and Rose streets.

“The Silberstein headquarters was made up of several buildings that were eventually connected, according to my research and what I have theorized,” Gordon told NJJN. He believes construction began in 1883 and was completed in 1911.

“I think they may have started with a small building of which we may have the cornerstone,” said Gordon, who suggested that Silberstein was ill “or thought he may not live much longer, so he had the inscription put on the back of the stone.”

Researchers have not found any living Silberstein descendants.

No matter where it came from, Newman said the cornerstone should be returned to a place of prominence honoring the era of manufacturing in Newark and the Jewish community that played a vital role in developing it.