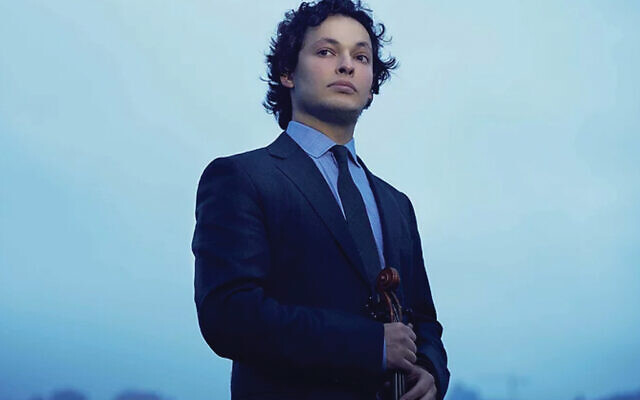 Russian-American violinist Yevgeny Kutik will perform selections from his album, “Music from the Suitcase,” at the Morris Museum’s Bickford Theatre. Photo by Corey Hayes

Violinist Yevgeny Kutik vividly remembers his Jewish family’s upheaval in 1990, when he, his parents, and maternal grandparents were forced to flee their native Minsk due to anti-Semitism in the then-deteriorating Soviet Union.

His mother, Alla Zernitskaya, was dismissed from her position as a violin teacher at a conservatory for gifted music students because, she was told, there was one too many Jews on the staff. Kutik’s father, Alexander, the assistant principal trumpeter for the Belarusian State Philharmonic, had heard anti-Semitic slurs in his workplace and Kutik, at age 5, was bullied in school.

“It was time for us to emigrate, leave,” Yevgeny told NJJN in a telephone interview.

At that time, those leaving the Soviet Union were only allowed to take the equivalent of $90 per person and two suitcases, one of which Kutik’s mother insisted on filling with sheet music from the family’s collection, believing that music was a significant part of their family’s musical history. All else, including his mother’s violin, became state property. (Years later, after the breakup of the Soviet Union, the violin was returned to his mother.)

Kutik eventually recorded the music in a 2014 album, “Music from the Suitcase,” with pianist Timothy Bozarth. The album debuted at No. 5 on the Billboard Classical listings that year. Selections from the album will be performed by Kutik at the Bickford Theatre in Morristown on Dec. 21
and 22.

“There is quite a history in that sheet music,” Kutik said. “I didn’t pay attention to the sheets when I was growing up … They were old and yellow, for a lot of years.”

The family, with the help of the Jewish Federations of North America (JFNA), was able to come to the United States, where they settled in Pittsfield, Mass. Kutik’s mother worked for two decades as a music teacher in the local schools and she taught her son the violin. Today, Kutik, now 34, is a sought-after artist who has performed at Lincoln Center, the Tanglewood Music Center, German and Swiss music festivals, and with the Boston Pops. His music has also been featured on NPR’s “All Things
Considered.”

His preferred composers are those “who were either banned by the Nazis or never had their work penetrate the Iron Curtain,” and he believes the songs he selected for his album are biographical in nature. Kutik’s program in Morristown will feature Prokofiev’s “Sonata No. 2 in D Major” and “Waltz from Cinderella,” the latter from “Music from the Suitcase,” Stravinsky’s “Duo Concertante,” Rubinstein’s “Romance,” also from “Music from the Suitcase,” and Strauss’ “Violin Sonata in E-flat Major.”

“The various ways in which these composers antagonized the Nazis through their artistry are exemplified in their respective pieces, highlighting the resilience and enduring power of art to fight tyranny and oppression,” Kutik said. “The pieces on this album carry with them a simplicity and directness, and with this immediacy, a striking beauty. It reminds me of what we went through and how far we have come.”

Kutik lives in the Boston area with his wife, Rachel Barker, a social studies teacher. Barker comes from a musical family as well: she is the daughter of Boston Symphony Orchestra principal bassist Edwin Barker.

Kutik is part of JFNA’s speaker’s bureau, and he performs throughout the United States to raise awareness and promote the assistance of refugees from around the world, a cause he feels in-tune with.

“JFNA were the reason we were able to settle in the United States,” he said.