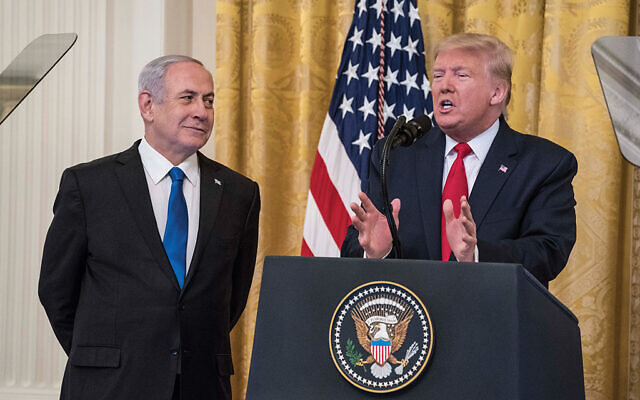 President Trump and Prime Minister Netanyahu during the peace plan announcement on Jan. 28 at the White House. Getty Images

At a time when many liberal Jewish groups are calling for Israel to “end the occupation,” on Jan. 28 the Trump administration rolled out its long-awaited peace plan that calls for recognition of Israeli sovereignty over about 30 percent of the West Bank — including the Jordan Valley — and Jerusalem.

At a White House press conference, Israeli Prime Minister Benjamin Netanyahu called it “a great plan for Israel, a great plan for peace” that he said he would use as the basis of talks with the Palestinians. Opposition leader Benny Gantz of the Blue and White party met with President Donald Trump in the White House privately a day earlier and also agreed to endorse the peace plan. Palestinian President Mahmoud Abbas said simply: “We say a thousand times, ‘No, no, no’ ….”

Nevertheless, the Israeli cabinet was reportedly set to meet Sunday to begin extending Israeli law over parts of the West Bank based on the Trump administration’s recognition of Israel’s sovereignty over the Jordan Valley and areas of the West Bank. The peace plan includes a map of Israel’s borders — the first time, according to the White House, that an “understanding with Israel regarding a map” has been reached that sets forth the borders for a two-state solution, one that Netanyahu has agreed to embrace.

Earlier that day an indictment was filed against Netanyahu on three corruption charges, which means that he will be campaigning for the March 2 election as a candidate under indictment.

David Halperin, executive director of the Israel Policy Forum, noted the irony. “Usually a peace process would be promoted and discussed with both sides and would not be timed for a day when the prime minister is indicted,” he told NJJN.

The fact that the U.S. has agreed to Israel’s extension of sovereignty over portions of the West Bank, Halperin added, “leads to a slippery slope that will endanger Israel’s future as a secure Jewish and democratic state.”

About 100 Jewish leaders and Trump supporters gathered in the White House to listen to Trump outline the peace plan and hear Netanyahu enthusiastically embrace it. Among them was Mort Klein, president of the Zionist Organization of America, who told NJJN he believes that “once the Israeli government says it is going to apply Israeli law over all of the Jewish communities in Judea and Samaria [the West Bank] and the Jordan Valley, then America will recognize Israeli sovereignty over it.”

Klein applauded also the peace plan’s call for an end to all Palestinian incitement, an end to promoting the BDS movement, and a requirement that the Palestinian Authority stop paying Arabs and their families who murder Jews.

But Lara Friedman, president of the Foundation for Middle East Peace, scoffed at the plan, saying in a NJJN interview: “If you don’t care about democracy and the rule of law, this is great. The entire thing is framed in condescending, racist tones. Anything they [Palestinians] get is a gift that can be conditioned and retracted at will.”

She added that the map proposed by the plan shows “non-contiguous Palestinian areas surrounded on all sides by Israel.… And the U.S. laid down conditions for a state that no Palestinians would ever accept.”

Nevertheless, it is up to the Palestinians whether or not to come to the negotiating table, pointed out Shoshana Bryen, senior director of the Jewish Policy Center, who also attended the press conference.

“Several times the president said they [Palestinians] have been pawns in history since 1948,” she told NJJN. “To me, that doesn’t sound racist.… If you are already inclined not to like it [the peace plan], you won’t. If you are inclined to like it, you will. And what the president did was put the U.S. on record as to what the U.S. thinks is the way to go — a way that will benefit both sides.”

According to AIPAC, the failure of the Palestinians to come to the negotiating table is “unfortunate” because “direct Israeli-Palestinian diplomacy is essential to create a durable peace and lasting two-state agreement that effectively addresses the concerns of both sides.”

In a statement, the pro-Israel lobby pointed out that “the Palestinian leadership has continually refused direct talks with Israel for the last several years. It is now essential that Palestinians both forgo the path of violence, boycotts, and the criminalization of differences at international forums and return to peace talks with Israel.”

Nathan Diament, executive director of the Orthodox Union Advocacy Center, told NJJN immediately following the president’s press conference that he attended a briefing by David Friedman, America’s ambassador to Israel, who “tried to walk through some of the details of the broad framework the president laid out in his speech,” and “gave us a perspective in terms of the starting point of the discussion by saying that their starting point was not — as many past initiatives have been — what do Israelis have to give up to obtain security? Rather, it was from the perspective of, what does Israel need in order to live safely and securely?”

Asked his assessment of the proposal, Diament replied: “We are still studying the details.”

Also noncommittal was Rabbi Rick Jacobs, president of the Union for Reform Judaism, who said in a statement: “An opportunity to make peace is a holy act, one that must be considered and weighed with the deepest seriousness and attention. We laud all efforts to bring peace and firmly believe that a secure Israel side-by-side with a viable Palestinian state is in the best interest of American foreign policy.”

But Rabbi Jacobs was less noncommittal about Netanyahu’s pledge to unilaterally extend Israeli law over the West Bank, saying, “We believe that this move toward annexation is dangerous for Israel’s future and for stability and peace of the region overall.”

J Street, the dovish Israel lobby group, opposed the proposal, saying in a statement that it is “the logical culmination of repeated bad-faith steps this administration has taken to validate the agenda of the Israeli right, prevent the achievement of a viable, negotiated two-state solution, and ensure that Israel’s illegal occupation of Palestinian territory in the West Bank becomes permanent….”

On the other hand, former U.S. Sen. Norm Coleman, national chairman of the Republican Jewish Coalition, said the plan “has great potential to bring peace and security to both Israelis and Palestinians. The plan’s conceptual map and detailed proposals strengthen Israel’s legitimacy and security. The plan will bring important areas of Judea and Samaria under Israeli sovereignty and ensure that Jerusalem remains the undivided capital of Israel.”